We might have said enough about the faltering site.
In the mean-time there are a lot of people posting Observations, some of which are quickly disappearing into History, with and without agreements.
Further, there are quite a few New Posters who are, I assume, completely unaware of the difficulties we are raising (over & over) here.
My small-time demonstration project here https://www.ispotnature.org/communities/uk-and-ireland/view/project/738198/recent-observations-without-an-id has revealed that a small number of USA observations are without support, as well as others in our own community.
I would like to think that the people here, in the Forum, are well qualified to offer support to anyone who has no ID(ea) or no Likely ID(ea).
The plea? carry on supporting Observers and 'specially encourage new posters with Comments, which, one day SOON, they will see!

Happy to have a go at USA plants - they share some of our species…but how do I find them to help with ID?

Set up a filter on the lines of the one in Derek’s projects, but add group and geographical filtering.

But I went through Derek’s projects, and the only plants remaining are in South Africa, so you may want to select an more extended timeslice.

Oh good Jo. I have updated the project to collect Posts from Jan 1st.
Open the project, then the map, enlarge and click on any post - it will take you there
Thanks
https://www.ispotnature.org/communities/uk-and-ireland/view/project/738198/recent-observations-without-an-id

Hell’s bells - there’s a lot there (3644) includiing a Sycamore mid Atlantic and Outside the UK Polygon).
But I think it’s all-time, so there may be hundreds from the deep past.
You might try it in stages with a restricted date-window.
Those dates can be altered at will.
I feel we should be helping newcomers particularly, if only with a comment of support
The key will be others taking an interest.
It’d look prettier if you added a Project Pic

I have been through quite a few. I cleared the most Northerly and most Westerly (Svalbard and Mid Atlantic) today but there are still over 3500!
Many are very easy to fix, some almost impossible. What is galling is that the original Posters, and those whose comments are in the posts, will probably never know what’s happening, nor be able to agree to any new or modified IDs.
Anyone can help here. Soldier on then, in the name of decency!
Here’s LvtG’s Gallery - newest one (first) could may be left to the normal process.
https://www.ispotnature.org/communities/uk-and-ireland/view/project/738637/unidentified-western-palaeoarctic-plants/observations

Nice idea, good attitude, but:
This used to be my night-time wind-down, fire up the tablet and look at the unidentifieds. Not that I was very often able to shed light on them, and I soon learnt to leave any identifications till the next morning, after the caffeine fix - but I had good intentions (though we know what is said to be paved with those).
But I can’t do this any more: as noted elsewhere, I soon run into the “unresponsive script” wall on both my Android devices.
Perhaps I need to change my bed-time routine, and reinstate the practice on the PC.

I am still looking at it but much less than I used to because the new system is so much slower (takes a noticeable time to display each image so I cannot just skim down the list of observations and go to the ones where I think I can add value). Plus without track changes if I ask people to provide more information/details (often important when helping no users) I don’t get notified when they have done so, which frankly gives them a worse experience than nothing as they get asked to do extra work and then get nothing out of it.

In addition iSpot no longer works on my computer at work, so I cannot browse through here at lunchtimes as I used to. That’s largely because the work computer is a very out of date version of Internet Explorer (9 I think) so it’s not reasonable to expect the system to be designed for it, but again it takes a chunk of my iSpot time away.

the new system is so much slower

Yes, despite all the fairly major issues that we gripe about, it is all slower to load and move though. The back button, particularly, on any Browser is the pits - every other programme works much better. I use a pretty smart WiN10 PC with loads of good ‘architecture’ and yet iSpot is still the pits. I can only manage about half an hour at a time because of the gradual slowing of everything and my increasing anger. I have a shortcut to clearing Browser History and purging my RAM - I use it before posting or responding
We must, however, do our best and not give up or in. I hear, in a very roundabout way, that the Code writing team are on holiday but that there is an acceptance that the users here are to be listened to.
It WILL be better soon, I’m certain and, as soon as Changes Notifications come we will feel a lot more like engaging with the site

It’s really slowed down for me on the PC, too. Around 30s average for a page to load, even if I keep clearing the cache (350MB allowed). A lesser man could lose heart…

Why is this? We were promised and much faster site.
And yet my observations do not load the pictures until I go to them: on the old iSpot they loaded while I was busy with others.

Also in the List View the pictures do not open until you get to that part of the page. What a stupid concept - it is almost as if the page is designed to keep you waiting no matter what!!! UTTERLY FRUSTRATING!

The work round against having to keep navigating the carousel is to open observations in another tag.

I have been trying to load up several observations in separate tags so I can then rapidly move from one to the next. This doesn’t work. Thinking and observing further, it doesn’t start rendering the observation until the tag is the currently active tag, In Chrome at least this adds a delay until you bring that tag up to the top. When you do that it’s so slow that I’m tempted to go do something in another tag, but that just makes things worse.

I’ve haven’t done anything more than trivial with JavaScript, so I’m not in a position to identify whether the problem lies with the database, or with trying to be clever with the display.

As for pictures not opening in List View until you scroll down, the same happens with Google Image Search; I presume that the intent is to save bandwidth and server resources by not serving images that the user might never see. (I’ve seen the List View with and without pictures, but haven’t worked out why; I think I prefer it without pictures to save screen real estate - if I want the pictures I can use the gallery instead.)

I use tabs extensively! At this moment in time I have 15 open - except that they are not open: the pictures dont load until I get to them. On the old iSpot they all loaded so that by the time I got to the next it was ready.
When curating I sometimes open up to 150 observations in tabs for copy-pasting curatorial notes or identifications. This new system is a total drag and waste of time.

As your your comment
-[quote=“lavateraguy, post:14, topic:325”]
I’ve seen the List View with and without pictures, but haven’t worked out why; I think I prefer it without pictures to save screen real estate
[/quote]
If I dont want to see pictures I would not open the List page: the whole point of opening the page is to see the pictures and which ones I can ID and which ones I can comment on. Without pictures they are meaningless. How does gallery help? One needs pictures and user and locality and ID (without having to open the observation) to review a collection or species or project or filter.
Alternatively I am trying to post identifications or check on IDs. What on earth is the point without pictures? And gallery is useless for this: you cannot see what the existing IDs are or have access to their localities.

Clearly you do not seriously use iSpot: perhaps I should visit and give my course on using iSpot to its full potential - except that now one cannot because it has been redesigned not to work to full potential and to slow one up and frustrate one.
So lots of conservationists, planners and serious iSpotters that have been trained on the old iSpot are now as frustrated as hell because the very purpose of the particular pages is thwarted by programmers making pages behave to trip one up.

REITERATING MY PLEA
All well and good and technically VERY Interesting
But whilst we ‘bicker’ and complain, the site’s Observations are piling up and compressing the layers of History.
One glance at this gallery - the 50th Page! of goodness know how many pages 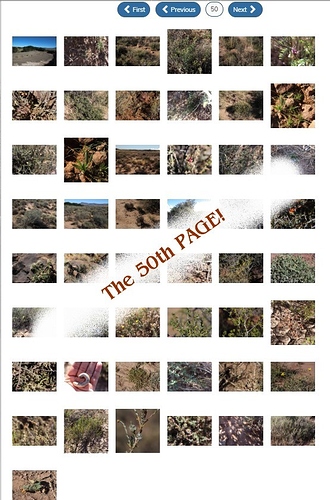 shows that WE are doing little to help those who post Observation hoping for some reaction.
There are hundreds of posts without comment, ID, agreement or support. Many are from a period MONTHS before the current difficulties (though this project only reaches back to Jan 2017)
It is true we will not get thanks nor get notified of our interest and commitment but those who are thinking of leaving iSpot because NO-ONE is interested are our future here.
Go see https://www.ispotnature.org/communities/uk-and-ireland/view/project/738198/recent-observations-without-an-id and click on Gallery Page 1 - I have just removed a few - it’s not always easy,

WE are doing little to help

I take it back. About 48 of those posts have gone today. How heartening.
I see a few people have left comments in the most courteous way “I suggest you add the ID of…” but this method is somewhat flawed until we get Notifications back. Even then many will still not get to comments. I think, all in all, it might be better to offer an ID if at all possible.

Well done! - I will start working through (may take a few weeks, but at least we can get these down to family/genus (better than nothing, anyway). Am not used to setting up projects but this one seems to be mainly NW Europe (is this the same as Nearctic???)

The Holarctic is comprises non-tropical regions of the Northern Hemisphere, which has a fairly uniform fauna and flora. The Old World portions are the Palaearctic, and the New World portions the Nearctic. The Neartic is North America down to roughly the Isthmus of Tehuantepec. Geologically this is close to being equivalent to the North American craton, much of Central America being formed by more recent volcanism, but the northwards extension of tropical forests is part of the Neotropical Region (roughly South and Central America and the Caribbean). On a finer scale there are latitudes in Mexico where the coasts are Neotropical and the interior Nearctic.

The project I set up is roughly the Western Palaearctic (Europe, North Africa and Western Asia), the Eastern Palaearctic being SIberia, Central Asia, northern China, Korea and Japan. The reason is that most of the observations is in north westerrn Europe is iSpot’s geographical bias.

The reason I mentioned Nearctic was to indicate that for USA plants a similar project could be set up with the same filter, but a different geographical polygon.

People should be coming back to their observations looking for replies even without notifications.