I thought I’d try a quiz. I selected birds, challenging. I was surprised to be asked to identify birds that don’t occur in Europe, yet alone the UK. I scored seven out of ten but I wonder if the quiz would have more meaning if you could at least select a continent. Imagine being asked to ID an Indian spider if you had chosen ‘challenging’ for invertebrates! I dread to think what the ‘expert’ quiz must be like!

Quizzes have been a problem since the launch of iSpot Mk 3.

https://forum.ispotnature.org/t/quizes-oddities and other threads. (I tried a couple and they’re still displaying some of the described problems.)

I agree with those who argue that the quizzes should be ditched (if only temporarily). They are far, far too difficult. There was a rather poor photo of a warbler in the one I mention above. I guessed icterine but it was melodious. If I’d looked in a book I might have got it right but I suspect that many people would not even get it correct to genus considering that both are pretty scarce in the UK. (I did see a melodious about 25 years ago in Sussex but I’ve never seen icterine anywhere.)

PS Just for a laugh I tried the ‘expert’ bird quiz. The first one was to identify a bird from a photo - which I got right (black-naped oriole). But Q2 asked you to ID the same photo. I put in the oriole and was told it was wrong - the correct answer was shag. I gave up at that point. (Similar experience on the beginner’s quiz where I had to ID a photo which couldn’t be seen. As it happened I had a lucky guess and got it right. But then it put up a photo of a booted warbler, which I got wrong… not many beginning birders would get booted warbler, even with the help of a good bird book.
I rest my case!!

You correctly guessed a photo which you couldn’t see? You are wasting your time here. You should be doing the lottery.

I have asked directly again and again for the Quizes to be taken down for a serious review.
Type quiz into search here (above right) and see some ignored history
Item 14 here (origin actually 2017) Improvements requested
I have mailed Admin directly again,
I MUST say though that is highly entertaining following the link in LvtG’s first comment above

I think I’ve used up all my luck now! (I perhaps should have explained that you were given four possible answers and had to choose one, so I had a 1 in 4 chance!)

I think the quizzes may be taken offline after we do the dictionary update this coming week.
It has been suggested that it may be a simple fix to get them physically working again (they don’t accept inputs at the moment so can’t complete the quiz properly) but the logic that selects the species to go in questions has not been working properly since they were implemented on the new site despite numerous attempts by the people that produced the new site to fix them. It seems simple to generate this kind of quiz but aparently not.

Please for a small ‘committee’ and review the Quizzes. I am NOT a volunteer

Discounting feathers there are only two or three UI birds on iSpot…so if you’re looking for a quiz, you might like to solve the chick mystery. 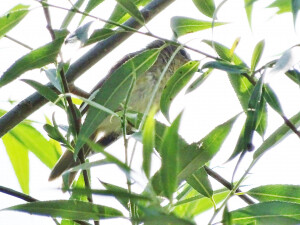 Observation - mystery chick - UK and Ireland. Description: This chick was calling and I thought a Garden Warbler in the next tree was the parent. But the forke