Why do we have to confirm a post before we can see it.Posted wrong photo in an observation yesterday wasn’t till I had confirmed realised what I had done.went to edit it by then it had been ID obviously wrongly.

I’m afraid it’s just one of the still lengthy list of problems with this new incarnation of iSpot.
There’s a clear and notable difference between the hard work some users have been putting in to make the site friendlier and more interesting, and the almost deafening silence from most of the administration team.
I admire those who are trying to encourage users by welcoming and guiding “newbies” where possible. But. let’s be honest: the site is still far from easy or intuitive to use.

we just have to be careful. We used to have the luxury of a preview - no longer. There will be no improvement here until the OU make more funds available. Might you PAY to be a user here - just asking!!
I suffered yesterday - it sometimes takes me 40 mins to form a post with, say, 8 photos. I pasted and copied the wrong text into the ONLY un-editable part - the ID Notes!
I deleted and started again. I am glad no-one had agreed or added a better ID tween times
Added to Improvements list 17 Allow PREVIEW of Observation detail before 'publishing’
As for [quote=“Amadan, post:2, topic:549”]
deafening silence
[/quote]
and the rest. It IS high-time Admin came UP front to keep us informed of their difficulties at least. WE are the users, WE make this site work, I would like to be kept informed.

Guess we will have to up with it.

Paying,depends on charge yes but I think I would in the minority. Mind you the cock up they made when updating site I wonder where our credit card details would end up.On a different note why do I have to sign in to the Forum every time?

Minority? I wonder. But yes, I think I might pay too but not until we have some news and firm promises from Admin.
If you log out of the main site, then it’s likely you’ll have to sign in here. I rarely sign out of either, but my PC Cleaners log me out of everything - I run those every other day.

Yes, you have ticked to receive emails - this is completely separate from Logging in/out. You might have an unseen setting in a piece of software, even Windows or Chrome ’Log me out when I close down’ say.
Review all your settings - Chrome may do that.
I guess you use a Browser, so Open iSpot, Log in and Add it to Bookmarks. From then on, when you click the linked fave it will auto-log in IF you agreed to ‘Remember Password?’ I think once you are logged into the main site, going to the Forum should just delay but find your password. But you can also go through the Add Bookmark procedure for just the Forum.
A small bit of m’bookmarks 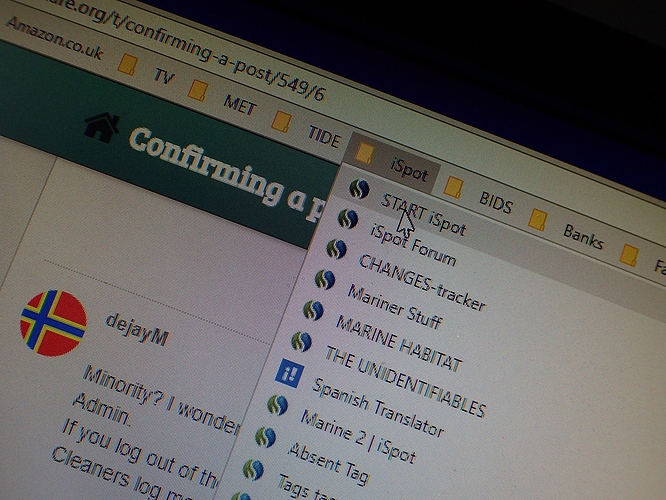 P5071527 small.JPG1382×1037 490 KB
I use Chrome (most Browsers will be the same). In Settings/Advanced there is a section to Manage Passwords - it’s intuitive.
Also in some Cleaners you need to KEEP Cookies for certain sites, so they don’t get ‘cleaned’. though I do not keep iSpot Cookies
There’s more if you need. But you can type ‘Passwords not saved’ into My Google
1 Like
marlandza 8 May 2018 16:59 #9

Well - my turn to moan - but I should have learned by now;
dejay and I have been following the students from the https://www.ispotnature.org/communities/southern-africa/view/project/759698/apes20352018 project.
“To encourage use of iSpot by biodiversity students at 2nd year University level”
Suddenly I have become aware of problems that need to be addresed and I spent a lot of time this afternoon trying to point these out, especially using a photo and not giving credit to the photographer.
Actually there are really lots of problems and I’m wondering who is mentoring the students.
BUT my problem is that I must have moved my hand and the whole bang-shoot disappeared - Yes I know Derek. I should have worked elsewhere and then pasted it - but it’s too hot here in London

and I really don’t feel like starting again - so I’m just having a little winge - we can edit here, why not within the iSpot comments ?

It happens, not to many otherwise they would be here bleating. My fave ‘whole-bang’ is, when loading in pix, say the tenth one, is dropping it outside the small Dropping Zone. Nothing rescues all the work I’ve done - it crashes and that’s that. It doesn’t happen to anyone else because, either they don’t drag and drop pictures or they never make mistakes.
And, like everywhere else in word processing, if you block a piece of text, then touch a key, it disappears. Fine if you block intentionally.
Otherwise, be happy. Because MORE people are posting and the quality is rising. Working my way through thousands of old posts, I encounter too many Fire&Forgets. Put up a not very good picture, say nothing and leave! THAT is not happening anywhere near as often today! (though it IS still happening)
Yes, the ZAPES Project is probably misled, misjudged and mis-most things. No-one, except perhaps the posters, get anything from it. I assume it is generated from a well respected “University level” Institution but where is the enthusiasm, continuity and commitment? Projects are so powerfully useful.

The OU’s Neighbourhood Nature courses have also had problems with insufficient mentoring of the students.

Wish I could spend a few hours with these students - there is so much potential and no real way to guide them if they are not encouraged to go back and read the comments - or to discuss their finds with their colleagues.
What I did find worrying was the use of the same photo by a number of students (I think they are called Learners in SA). When does this become plagiarism, rather than being unaware of the concept? - but these are “second-years”.
Thanks for listening.