Why are you still here?

Because I have invested 50 000 observations on the site! When it was up to standard.

And because I am southern African curator - not that that counts for anythng. Since the Sept 2014 amalgamation I have been unable to do ANY curation. The most urgent requests (about 1% of curation) were done by the UK curator.

This is the second degradation of the site. Sept 2014 was almost as bad and also generated over 100 major bugs or retrograde design (compared to the old ZA site: we had tailored the ZA site for efficiency and user experience, some of which was not implemented on the UK site), of which most are still present.

But unless something is done soon I shall leave. The question is:

We will demand all our observations repatriated though.

But at this stage we are giving the OU one last chance.

As Tony says this is a big deal. We spoke recently to a manager of the programmers who have been working on this issue for some time and he said that the issue also affected the old site. However in earlier years I did quite a lot of checking of locations on the old site and they seemed fine to me (checking using gps 5m accuracy and zooming in and assuming google aerial imagery is only a few metres out at worst).

Joe, how have you been entering your data? Is it from the metadata in images (the lat long coordinates stored in the image exif) or by clicking on the map or by typing lat long or OS grid reference. There was a suggestion that it was the OS grid ref that was not working correctly whereas the other methods may have been ok.

Would be good to have plenty of examples from all of these methods from different parts of the world. I did some checking of the metadata method when the new system first started and those looked ok.

If it is mainly affecting OS then this narrows down the problem. I specifically mentioned to the programmers when they first started that (a) the OS grid had recently changed, although the change was too small to affect the kind of location info we use but much more importantly (b) there are many methods to approximately convert between lat long and OS but there is only one method that is fully accurate, the Ordnance Survey OSTN15 & OSGM15 method (it used to be OSTN02 & OSGM02 before the OS grid was updated). Many general websies use one of the approximate methods as it is much easier and computationally less intensive but depending on the method the errors are between 3m and 300m so these are not acceptible.

how are you getting the locations for your 100x100 square, that would be a good one to test for bad locations. Do you have the ability to do this yourself possibly using the tom bio plugin for qgis? Or I may be able to do it for you.

Did you know that all email notifications from the Forum are linked to the Approval site
Typically Typically http://forum.ispotnature-approval.org/t/continental-drift/399/14 - logged OUT
which should read Continental Drift? - Logged IN
It’s a whole MESS Mike and getting worse DAILY, if not HOURLY

I have looked through a bunch of my uk observations and the location is correct to within a couple of metres for all of the ones checked. However I nearly always use the gps location embedded from the image so this is only checking one method. I do occasionally use the map and these you can see so assume they don’t move.

What I have not tested is inputting the OS grid ref directly into the box on the page, this is where I think one of the errors is happening. This is more difficult to test as there are few ways to get the correct OS grid ref for the reasons I mention elsewhere (websites and indeed gps units/smartphones may use the less accurate conversion method), suggest you use the https://www.ordnancesurvey.co.uk/gps/transformation/ OS website if there are just a few to test.

Ok, thanks for the message about email notifications from approval site that explains the problems I was having yesterday with those images not showing. Hopefully this should not be difficult to fix.

not tested is inputting the OS grid ref directly into the box on the page,

I will test some methods this morning…

Happening from at least 14 Aug…

A test of an 8 fig Ref. I typed in HY 3815 0645 the exact centre of a six-fig ref.
Whilst the box only ‘likes’ 6 figs, it accepted the location, converting it immediately to the correct Lat/Long but leaving only 6 figs in the box.
If nothing else it has allowed me to locate the exact centre of the squate. It shows on my map.
I will amend it to TEN figs to see what happens - though the lat/long is correct to Cms I think
I have a decent GPS Locator but today is a bad day as NATO are bombing and shelling Cape Wrath, so GPS is wobbled. Poor those white van guys! https://www.ispotnature.org/communities/uk-and-ireland/view/observation/748012/test-post
EXACT LOCATION to 1m OS (from the Observation) 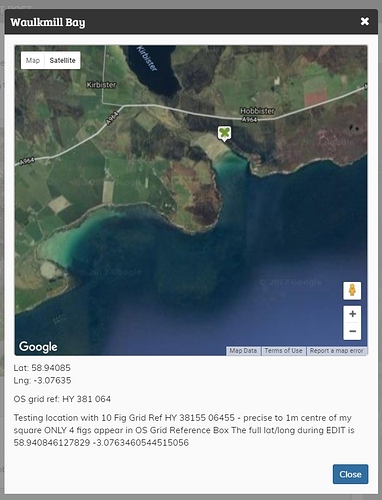 All data for longitude, no matter how they are inputted are apparently snapped to a grid at consequently get 15 significant digits even if only four are entered, thereby SCREWING UP THE LOCALITY RESOLUTION.

Only clicking on the map seems immune to this, but the map has a bug of not recording the resolution and records everything to 15 decimal places even if the resolution is in fact 1000km!
The old site had this working! This is thus a bug, and one that the Open University vowed to honour as a condition of Southern Africa joining iSpot because they did not want to explicitly record locality resolution.

Please get this fixed!

Aparently they are working on your bug Tony and the fix may involve a slight modification of the data input page but I have not seen anything on this yet.

After speaking to the manager of the programmers he said that the OS bug was present on the old site as well. In which case it would be good to define just how bad it is and if it is having a significant effect onthe data. I suspect it may only affect observations where they are entered by putting in the OS grid reference. From memory I did a check of hundreds of the grid refs on the old site to check the site was putting the correct OS grid ref for the lat long values and those were correct. But what I have not done is entered data using OS grid refs to see if it is this part that is leading to data corruption and if it is then is it happening with every record or just some and how much corruption there is e.g. is it just a matter of lazy coding and not using the correct OS converter despite the fact that I told them exactly what they should be using.

Aparently they are working on your bug

I am not having any problems with Location. For my project I am restricted to a 100m x 100m square but am posting to ten-, maybe one-metre accuracy.
I can type in a six fig ref, add one or two digits afterwards via an edit to precisely locate the sighting. I can type or copy in the 17 digit Lat/Long - it all works perfectly.
This is my 110m x 110m square. I have perfect control, via edit, over exact locations 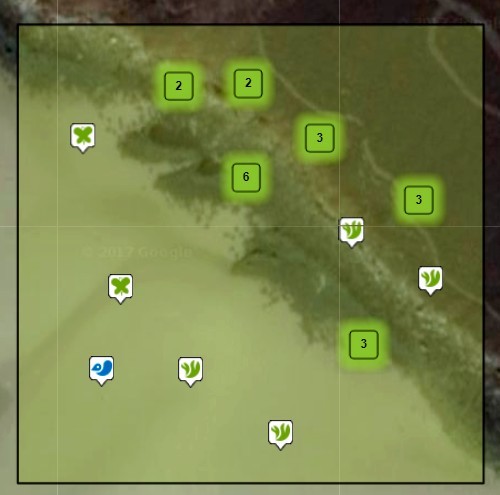 In some ways I prefer to use the SatMap for the project because the iSpot map is not accurate. Placing a location on the Sat Image has always been the favourite for me - I have been doing it for years. I have just checked a few of my old locations, they have not moved.
…
The picture thief (a few minutes ago) has just been and stolen all 9 of my Project Description pix. I have just replaced them. I need to be more careful because I am editing the project description and the Observations regularly. we ALL need to be cautious during edits, specially Locations because it means you don’t look to see if images are present. Amen…

We can confidently say that the picture thief never steals without it being obvious.
It is during the upload of the edit page that the pictures sometimes fail to load, and if you save those pictures are lost!
This should not be possible!!!

The pictures must exist and be re-linkable. it is reprehensible that the programmers are not responsible for fixing the errors caused by their bad programming.

I’m far from sure it was present on the old site (or if it was it was much less significant, perhaps only a few metres). On the current site if you type in an OS grid reference the entry is changed to a different grid reference, in around a decade of using this site I would have noticed that were it happening on the old one.