Am experimenting with an LED home made moth trap. Costs very little to make (around £30) and is very portable. It seems to attract a few different species so far - only used a couple of times. Just wondered if anyone else has had success with DIY versions?

I’m definitely interested in giving it another DIY go…all my garden traps have decided to pack up in short succession of each other mainly with wiring issues…Robinson first synced to electrics, then Skinner and now having issues with my smaller mobile trap both light LED powered by car batteries. Might have to invest in a new trap anyway but for now a DIY will be my first port of call so I can get my garden moth trap hiiit on! Would you mind dropping a photo of yours in the chat Steve. Would love to see it in daylight and lit up too

Will take some snaps and post them shortly. My trap box was made from scrap hardboard screwed to battens - the wiring could certainly be tidied up and perhaps the whole thing made waterproof but I was keen just to ‘prove the concept’. I use a small 7ahr 12v battery which easily gives a night’s usage (I charge up during the day).

I’m trying 3w leds one green, one blue and one uv which overlap moth receptor wavelengths. I wired in a photocell so the trap switches on after dark and turns off as it gets light. I hasten to add that I am no electronics nerd - I’ve learnt on a need to know basis. That’s the beauty of the interweb! 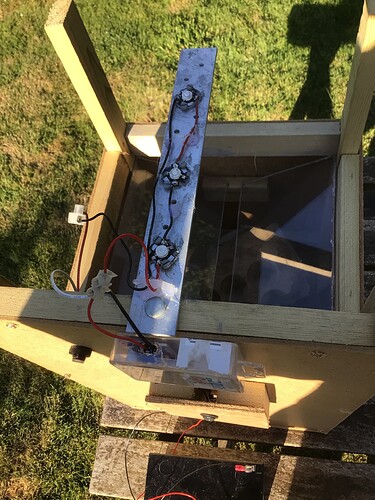 Will try a night shot later. These leds are incredibly bright so maybe I’ll catch the glow, the lights themselves will just saturate the tablet’s camera I think.

I would certainly modify this now and incorporate all the wiring into a waterproof box. The battery is easily carried inside the box for carrying. The little gizmo inside the plastic box is for controlling the voltage (costs about £5). I needed to step down my 12v a little as the leds are around 3.3v each so thought they might be destroyed or maybe not last as long if maxed out. 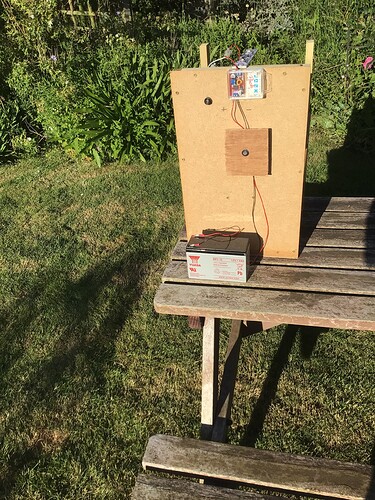 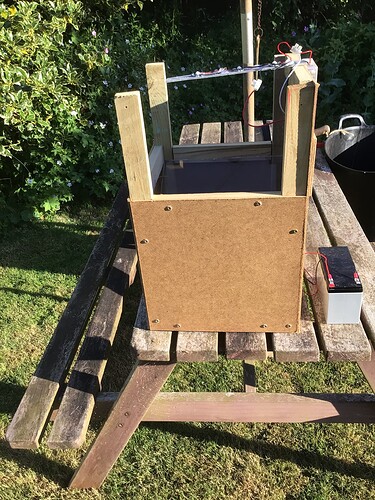 Wow! LOVE this so much. What a fantastic DIY project! I’m impressed! And to get that costs down is fantastic. New traps can be so expensive! I have heard there is a black painted bulb that still attracts moths but doesn’t distract neighbours

which I’m interested in testing out too. Not sure how good they are though. It’s brilliant that you’ve created it all from scratch.

Yes, always shocked at the price of what is basically a box with a light on top!

I got a black bucket with lid and a large funnel. A hole was cut in the lid to accept the funnel. Four lengths of threaded rod from the lid support a disc of clear acrylic which acts as a rain guard and a support for the light. The top of a tonic bottle (don’t ask!) is loosely bolted under the acrylic.

I have 2 lamps. One is a 240V actinic tube held in a tonic bottle with the base removed. The other is a tonic bottle with two 12V LED strips wound around it; one strip has white LED, the other has UV LEDs. The lights can be swapped around by simply unscrewing one from the bottle top and replacing it with the other.

That’s interesting and like the interchangeable function. The rain guard is something I need to incorporate for my mark 2 version. Yours is obviously mains powered?

I came across another DIY version of the Skinner trap and they eventually did away with the box completely and simply draped a net curtain over the whole thing. The moths tended to stay on the outside and could easily be investigated without causing disturbance and flight. 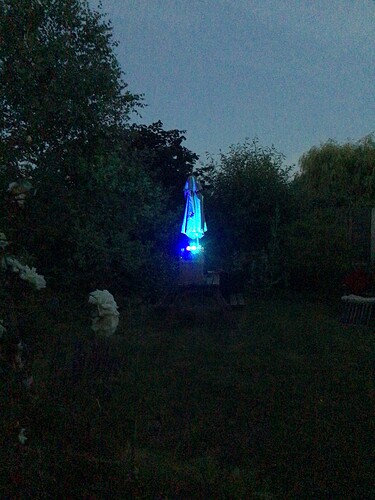 Not dark on this solstice evening so only just beginning to light up the surroundings. Have to wear safety specs and avoid looking directly (especially the UV) as can damage eyes.

As it gets darker will light up the nearby trees. I did think about a white sheet strung out to reflect more light upwards and outwards. It does look a bit ethereal with the blue and green and I’m sure the guys in the space station looked out of the window and wondered as they passed over

Should you ever need them, Rachel, we have loads of these sealed lead/acid batteries in KMI - both 6V and 12V - and at least one charger for them.

I admire anyone who manages to construct their own moth trap! There’s a guy in Yorkshire who sells the bulbs and electrics for those who aren’t confident with wiring. I bought my first trap from him some 20 years ago. But I bought a Robinson eventually.

LEDs from this company https://futureeden.co.uk/ are very cheap - around a pound each with free posting. Highly recommend.

Perhaps a bit off-topic but there was an interesting piece on pheremone lures for clearwing moths on the BBC SE News today (29th June). Probably available on iPlayer for UK residents. They showed six-belted and fiery clearwings (though not very well).

Thank you for all the comments, input and advice on this thread. I am feeling enthused to DIY it up! And thanks for the recommendation on pheremone lures. Dad used these and has some in the freezer which I’d like to try out if I can this year. Hoping they are labelled so I can use them at the right time for the right moths. I’m sure some were for Clearwings so this will be really helpful