Feel like I ought to be able to figure this out but I can’t so advice please:

How do I quickly find comments and/or identifications that have been added to old observations that I have not previously read? These are buried several screens deep in the Tracker. The yellow highlighting is lost immediately I move away from the tracker screen. What is the alternate method for visualising where unread changes have been made please. My memory of the old (preJune 2017) version was that this was quite simple.

Go to your iSpot and look for Tracking Headers.
See the yellows?
Start at the bottom, click it. A new tab will open, deal with it, close the Tab go to the next. NOT perfect but good enough for now. Do have fun! 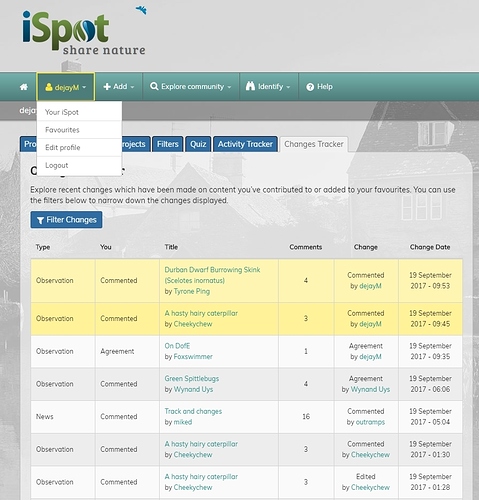 If you Close or Refresh the Tracker ALL yellows will disappear but Track is still Chrono-logic. You can still investigate each one but you’ll need a pen and paper beside you! You can filter them all with a short date-window, say a few days at a time. Keep the pen and paper handy!

Thanks for replying but I’m still no wiser.

I have moved away from the Tracker so I have lost forever the ability to see where changes may have occurred on my older content?? Unless I re-read every observation?? Trying hard to see that as a good thing.

This is a very second rate system, after we were promised that no functionality would be lost in the new version.

(sorry dejayM, but sussexmike has done what you suggest - been there and done that)

For this to work, we need several things fixed:

So this tool falls far short of what was promised. It is a ill-conceived replacement, where tracking is nicely catered for, but unread is totally neglected.

Not what the user asked for!

Alas at present the only solution is to laboriously go through item by item and (as dejayM pointed out) look at the heading “CHANGE” and ignore those that are by Yourself, and ignore those that are not the “Change types” that you are interested in. A painful process. Heaven help you if it extends over more than one page - you wont even have the yellow to help you.
And remember the yellow is not what you looked at but only changes after you last looked at the page. To do this you are going to have to record somewhere when you last carefully went through the “Changes Tracker” and on your next visit check every single item all the way until you get to that date-time. Can you believe that anyone designing this system would expect us to do this? Why can they not find a programmer who actually occasionally uses iSpot and realizes what a ridiculous and useless design this is?

Remember the old CHANGES. It was sorted by “Change type” - each one was under a separate heading - making it easy to home in on first “Identifications added” and then “Comments added” - a refesh cleared those that one had looked at under IDs.
If your memory is particularly good, you might remember that the pre Sept 2014 page also had a “clear” button, so that if you did not want to look at changes that were “edits” or “favourites” you could tag them all as read (or clear them as unread - not sure exactly how that worked). That seems like a world away now.

And the lists were sortable by the headings: so you could sort by date or type, or author or comments. The comments was especially nice, because you could look up those observations that were having exciting discussions and join in if you wanted.

I wonder what happened to the promise of as good or better! This is certainly a very poor imitation of what we had.

well.…I am MAKING this work for me. I am prepared to MAKE it work for me. It is in its very early days, it works.
That it is abysmal compared to the last is true but irrelevant to my persistence and ingenuity.
Long text-passages of complaint here are not working towards the ultimate goal and I do not feel better for writing them, when I do.

I am MAKING this work for me.

We all are. Hang in there.

I only hope that you are correct that it is early days!
I was hoping though that iSpot would move forward with innovative and exciting improvements, not frustrating and disappointing setbacks instead. And that it would get faster rather than slower …

If I wasn’t a strong supporter of iSpot I wouldn’t still be here and paying attention on opening day for the new update. I am just rather disappointed that there is no realistic way to mine my old observations for input from the iSpot community, I was looking forward to that again and for me that feedback is the essence and joy of the platform.

Now I understand the functionality on offer in this latest release, I do think a better change notification system is required. That’s what computers are for. That said, the new update should be helpful for tracking observations posted from now on and before they get buried.

You will find that one you get used to the new system it gets a little easier and starts to become more useful (amazing what we can adapt to). I did exactly what @dejayM suggested and worked up from the bottom of the first page last night and today I can see what new comments/changes have been made (looking at the date/time of the update is helpful). If you are anything like me, you will have forgotten most of what you posted back in July, so I decided to just mine through the layers as far back as the start of September. I have decided that from now on though, if I am particularly interested in an observation other than my own, I will ‘favourite’ it - and that would enable me to set a filter on the new ‘changes’ to quickly home in on these. You can of course set a similar filter to just look at your own records after a particular date. Happy hunting!

Think of it as one step backwards but still a massive leap forward from where we were this time last week. The new system may create opportunities which were missing in the old one and which we haven’t identified yet. I think we should still keeping pushing to have bugs fixed and favourite features reinstated, but at some point we have to stop mourning the loss of old ISpot and try to make the best of what we have now.

Thinking about it - aren’t there identified, set stages of grieving you have to pass through?: disbelief, anger, loss, but finally acceptance and, once enough time has passed, hope for the future?

OK for small users, but I get over 100 observations per day (legitimate as per the old iSpot, not the X 5 - excluding my own - that is at present visible), and on the old site I had 2000-4000 observations in the “edited” category every month. (on the za site I could clear these, but I ignored them on the new site).

Clearly for the more active members what you are suggesting will not be trivial.

Good luck with the favouriting. It will so soon become so clogged it will be unusable - especially if you use favourites for other things such as observations that you want to check IDs on, or to keep pictures for talks or to come back to in a few months time (when you get that field guide you have been promising yourself)).
I would recommend that you rather just add a comment (even as trivial as “following” - quite a few people do it!) to track any updates. You can look it up under your own “Comemnts” rather: that would be more efficient.

Please stay at the ANGER stage a bit longer!!!

Initial horror and outrage and then trying to make the best of a bad job whilst supporting others as best I can and gently nudging people to try and sort out the problems is more my style. I don’t really do Anger - its very bad for you!

[quote="JoP, "]
"…a massive leap forward from where we were this time last week…
we should still keeping pushing…gets a little easier…hope for the future…best of a bad job,supporting others as best I can…"[/quote]

It’s nice to see this gentle attitude.
We all feel somehow let down here but we now know that anything is possible. Jo is right, anger is something we should control or, at least,not display so openly.
We need now to master this current system, so that we can be constructive regarding improvements. I am gaining in confidence again, already swapping comments with experts and beginners. I am challenging IDs using my experience and once again I am engrossed in the pleasures of iSpot.
I now feel the need to move away from the Forum, except for swapping ideas and solutions or reporting Bad Code Errors not already reported.

anger is something we should control o

So, everyone is prepared to make the best of a bad job, rather than get the bad job fixed.

Sometimes the stiff British upper lip is so depressing!
Why can we not push and strive for excellence instead?

Should we not channel our anger … or are you scared of a war?

I agree with Tony. we were promised as good or better. I have hundreds of observations going back to 2007. How do I practically keep track of changes to comments, identifications and agreements for all of them?
Also to mention, in the four months since the new system has been installed, iSpot has communicated with users exactly once to my knowledge. There has been no indication they are listening to any problems we are having. This update, if anything, makes me less convinced that iSpot is in fact trying to improve user functionality. Which I find extremely hard to understand in a platform that relies on crowd sourced input. My project inputs are dropping drastically – In some of them I am the only contributor so far this month. and there were uploads almost daily previously. Will these users return? I wonder.

Hey Tony, mind who you include in everyone please

I also think iSpot should aim higher than, for example, imposing time consuming workarounds which are a turnoff for busy people. I personally don’t see how they fit well with a platform that has claimed science in its mission or that is badged by a respected academic institution. To me it seems an unwise strategy if you want your users back or ever again aspire to funding from serious external organisations.

Given the dysfunctional channels of communication, it’s hard to know how to articulate a calm, respectful, realistic, consistent, and representative development path on behalf of the users but I hope that’s what we do.

Good to see that the Empire still has some fire in it! Go for it!

We need to get the process working, fast and streamlined. At present nothing is happening. I agree with you: BUT how to we get there? What must we do?

As curator for almost half of the observations I get all the complaints. But no one above is at all interested! First and foremost is to get an iSpot that cares about and listens to its users. But how?

iSpot has such potential with minimal effort compared to what we have. But at present it is just a major frustration and embarrassment.