Interesting read and images from Plants of the World Online

an online database published by the Royal Botanic Gardens, Kew.

Euphorbia caput-medusae was introduced from South Africa to the Netherlands around 1700 and described by Linnaeus in his Species Plantarum (1753). Linnaeus had previously worked for George Clifford, a banker and one of the directors of the Dutch East India Company (Verenigde Oostindische Compagnie, VOC). 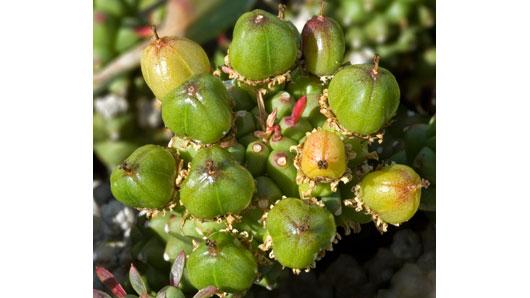 There are more than 2,000 species of Euphorbia (spurge). They range widely in habit from trees and succulent perennials to small annual herbs. They all produce caustic milky sap.

This species at Kew

Medusa’s head is grown behind the scenes, in the Tropical Nursery at Kew.

Kew’s Economic Botany Collection includes a sample of the acrid milky juice from Euphorbia caput-medusae that was donated to Kew by the artist Thomas Baines in 1854. It is available to researchers from around the world, by appointment.

Actually i think Euphorbia caput-medusae is on display at Kew at least sometime as I remember seeing it there and in ZA. One of the remarkable Euphorbias