Is every year unusual?

Last year there was loads of frost damage to plants in this area as the early warmth lead to plants coming out and beiing caught. This year April had frosts almost every night and some trees stayed firmly in bud until now, well into May, they may have avoided the frost but it seems quite a few of the ash trees near me have not bothered to flower, instead just stuck out leaves (and some are still in bud).

My Pieris had all its new growth (bright red leaves) killed off by frost and is only just now showing new leaves again. I notice lots of what appears to be new leaves nibbled off lying on local forest floors, I guess from squirrels.

I have noticed the Ash not flowering but going straight to leaf too. The Ash trees which aren’t dead, dying or cut down, that is.
.
Generally, 2021 seems a late year compared to 2020 - how late exactly, I am not sure, but feels like two, perhaps three weeks here in the SE corner of England.

I have got a fig tree that grew from seed when I rinsed a fruit and nut bowl out onto the ground. It came into leaf promptly for the first two years.
Both this and last year the buds have been frosted just after beginning to open making it take several weeks to form new buds.
At the allotments gardeners have been holding back planting stuff out to avoid late frost.
There has been congestion under glass this year.

A while back I saw a claim that this was the coldest spring (never mind that it’s not over yet) since 2013 (which had a freakishly cold March, including “the beast from the east”). But looking at the Met Office’s anomaly maps, on a historical basis it’s not been unusual, with March a little warmer than average, and April a little cooler.

It has not been unusual in Orkney. the swallows were 6 days late, the willow warbler stayed for a day, I have seen and recorded, only one butterfly and the mackerel arrived (to be caught) 23th April. It always seems that leafing is late - that is because I am impatient!
Apart from it already being the YEAR of Reed Bunting, what was interesting, the massive and acclimatised sycamores lost early leaves April 12th 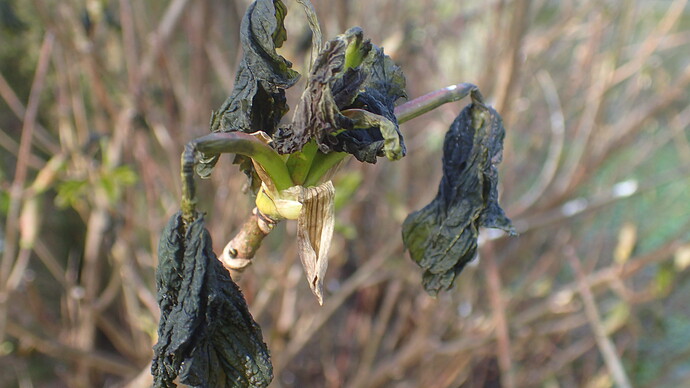 On allotment it looked like the Damson and blackcurrents were doing well being in flower all of April. But now I look at them there are virtually no fruit initials, all the remains of flowers have fallen off unfertilized or otherwise damaged.

One other very unusual thing about this year is the number of species of trees that have decided not to flower at all. Many of the ash trees around here did not flower and none of the Robinias have flowered, the Paulownias are very late in flowering and no sign of any of the Catalpas having flowers, they have only just got leaves. Interesting that in London the Robinas were fine with loads of flower weeks ago and Paulownias flowered earlier than here.

Interesting
here, the rowan particularly and whitebeam have exploded into blossom and not specially late.
I looked for Wych elm flowers and failed to find them, I suppose seed will be easier to spot.
Sycamore are OK but they are mindless seed-ers.
I have not been beyond nettle patches for a whole week - a few people have been following my iExploits thank goodness
Speaking of Wych I found two Observations of Eriosoma ulmi in the Site, each with different accepted IDs but with only one in the dictionary but both of which may yet be wrong!
https://www.ispotnature.org/communities/uk-and-ireland/view/observation/824682/

Of course as soon as I said none of the Robinias have flowered, I noticed a group of old trees with small flowers on, this is perhaps 3-4 weeks later than the ones I saw in London.
I missed most of the elm flowers this year too as they sneak out when you think the days are still too cold and horrible.

In the 1980s, I typed up my friend’s annual Adder Census correlated to weather conditions. At least half the monthly summaries would include a note of an extreme of some sort (her minimum standard being 50 years - so “the wettest [month name] since 1920”, for instance.
So I think yes, to some extent every year is unusual. The ones to note are where these extremes have a notable effect on wildlife. I’ve yet to see a reptile locally - probably related to the amount of time much land was under water. Nests in our garden have generally failed, probably due to the cold spell. And butterfly numbers have been remarkably low.

I have noticed quite a few 7-spot ladybirds on my allotment.
There has been aphids in my back garden though.