Think you may find this of interest dejayM. It never got an agreement or comments; so there was no point adding anything else from the rockpool 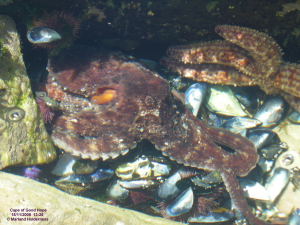 Observation - Octopus and others, Cape Point - 2008 - Southern Africa. Description: So glad I had the camera - generally I've met these creatures when swimming off the rocks and the fi

Your comments would be most welcome. See the black mussel shells - discarded after a meal?

Thanks dejay for your comment - I’m wondering if this video of an occie from Fish Hoek Beach will link here https://www.facebook.com/FishHoekBeach/videos/2615378618674456/?t=35

I was cheering along with the youngster… phew, the octopus made it. I think it is Octopus as you can occasionally see two rows of suckers

Thought it would be fun to post this.
I think they still have boats out in the bay to catch squid.
Then there is the season when the Nautilus shells blow inshore - sometimes with the mollusk still attached.
Copied this from the Two Oceans Aquarium post

The paper nautilus filmed in The Wild Ones , unfortunately, did not survive for long - but at two weeks, this is the longest a paper nautilus has ever survived in captivity to the best of our knowledge. Little is known about the paper nautilus - it is a pelagic animal from warm waters, so by the time this one washed up in a tidal pool in the Cape, it was already far out of its comfort zone and already facing severe stress. 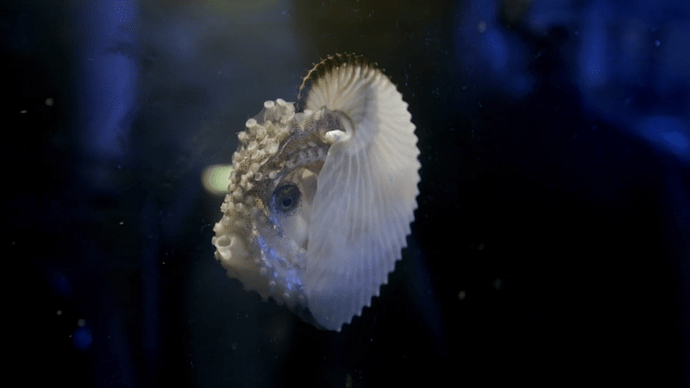 This paper nautilus gave us the chance to study its species further, and the improvements we were able to make to artificial diets and habitats for it will certainly improve future research efforts. Aquarist Krish Lewis recounted some of the behaviours observed - such as using its tentacles to lure food in, and a resting behaviour that suggests it might attach itself to jellies or fish for a “free ride”.
https://www.aquarium.co.za/blog/entry/where-are-they-now-the-wild-ones-an-aquatic-life-stars-who-have-moved-on

Thanks for posting that, good to see the rehab work being done there. Paper nautilus was new to me. The wikipedia article was fascinating.

Tap the little almost invisible box above to open it. ( No, I don’t know why the link is like that)

SANCOB is very active - You may enjoy reading this https://sanccob.co.za/birds-eye-view-from-sanccob-chief-executive-officer/