Order of LikelyID and dictionaries

The name is already on the UK dictionary,

detour yes. I could have said at JoP’s first instance that it IS in UKSI but not iSpot (& I suspect Jo knew that).
I was told recently (I am repeating myself) that it costs a lot of money to have updates coded in, even if “no one knows how”. @miked ? If it’s a question of money I’d rather have the much more urgent matters fixed before Dict, updates.

But I can not agree this is not an urgent matter. This is biodiversity after all. Without a name this obs. will not appear in any project or list.

I ALSO CANNOT AGREE.
Identification depends on IDs. it is OK for Orkney with its dozen species which are not going to change. But our southern African dictionary has tripled in size since 2014, what with the addition of Beetles, and several other invertebrate groups not in the earlier versions.
In addition, our marine species have been updated by many enthusiasts, many involved in the national SeaKeys project - all of them iSpotters hoping for the changes to be incorporated soon: now still waiting 3 years later. Over 300 newly described plant species have been added. Just among our toads we have almost 20 name changes: iSpot is now two years out of date for our most common frog species.
And our ants are now all on, with a cool new Ant book, but the ants on iSpot are still 3 years out of date and do not match the field guide and entire genera are WRONG!
This is simply pathetic!!!

It may not matter to you, but it does matter to us. And to be told that the money that was supposed to have been used to try and write the code to update the dictionaries had to be spent on the code to fix the “Current” (which is really the unread) and see the rubbish produced which does not include unread is simply a slap in the face.

The dictionary updates is merely another example of how terrible iSpot has become. It is as important as all the other bugs and needs to be given just as important a priority.

I guess a dictionary update is not trivially easy but I would have thought that a completely automatic update system would be an essential feature of iSpot. Why is it missing?

"It may not matter to you"
"it is OK for Orkney"

Ok, OK. I am as affected as most by dictionary issues - several difficult instances recently and so it was within days of my arrival here. iSpot is currently trash and you (everyone here) know(s) how I feel - it matters to me.
But this has nothing to do with me of course, What I write here has no effect on whether we get dictionary updates or Notifications back - I have no influence, only low opinions.
I am close to shutting down really, as I have used far too much energy,
Unless someone is going to say soon, with a hint of truth or promise, then all this is a waste of words and brain-power.
iSpot, in its current form, will probably never be the same as it was for us anyway; the whole programme probably needs an overwrite and the complete Admin Team needs to sit together and rethink their strategy.

In the past (before Sept 2014) the dictionary updates were not easy but they were trivial. All that happened is that new species were added.
There were no instructions. So we found out the hard way.

But why is it trivial?
Because with each dictionary update, proper curation will be to change the IDs from the old names (synonyms) to the new names. It may be nifty to merely use a lookup to display Protea mellifera as Protea repens, but users - especially non-biologists will get confused. An intelligent site will display the new ID with an explanation.
But on iSpot with “Agreements” this is an issue. A workaround is to - every time a dictionary update is done - to Curatorially add the new name as a Revised ID, carrying over each Agreeer, so that the old ID and the new ID have the same number of votes. Because of the “changes” (if they ever get our unread changes working) all agree-ers will be notified of the change and can then decide to go with the new name or the old. And any users who dont care, have left or have died, will not mean that the old name will thus forever the the Likely ID on iSpot.
Similarly, species that are subdivided need to be re-evaluated, and agree-ers should be informed that the observations need to be re-evaluated. This is more tricky as iSpot wont know which of the new names (or the old) to reassign the observation to. But a curatorial comment will alert everyone, and a list of observations to be reassessed can be posted. Yes, disinterested and lost users will be a drag, but hopefully enough users can be found to update the names.

Why is it missing? Prior to Sept 2014 iSpot had a dedicated programmer who handled these things. Now the IT department managers iSpot and none of them even know how the dictionary works, let alone how to update it.

Our problems now are exactly the same as in 2014. Too few programmers, not enough money, and time and money ran out before the programming was completed. So dictionary updates were simply never got to. Along with curation. And about 50 significant bugs. And everything had to wait for 2 months because of the Xmas recess when the IT department shut down.

This time it is changes, forums and curation that have lucked out. And it does not appear that many of the over 500 bugs are being got to neither. And everything has to wait for ? months because of the summer recess when the IT department shut down.

and the complete Admin Team needs

What iSpot needs is a proper Admin Team. That is iSpot’s problem. Almost no one on the Admin team cares about iSpot. Those who do care are ignored. No one is accountable. What is needed is a Steering Committee of iSpotters to oversee iSpot!!!

Are you prepared to sit on a Steering Committee for iSpot?

I just think that ispot is seriously lacking if it does not have a specification of how to cope with dictionary changes. As much as can be done automatically should be along with a clear protocol to fix the others. Maybe you have to mothball the not-likely ids and fix the likely and future ones. I’m not a professional botanist so I don’t know the minutiae of dictionary updates but I was once a professional programmer so I have some idea what could be done. But isn’t.

iSpot has an Admin team?
Having experienced a similar apparent lack of interest, or progress, in other areas of my life in the past, it is hard not opine that someone would quite like the site to fail. Perhaps it’s become too much of a burden to adminster, but no-one has the nerve to openly say “let’s shut it down”?
(Just because I’m paranoid, that doesn’t mean they’re not out to get me…)

Admin team in IT. Yes, they probably dont want it! But apparently they have full say as to what happens - the OU iSpot team sounds like they request bug fixes and the IT team vets them.

No, the specs were quite simple, I can reel most of them off the top of my head - having spent over a month twice a year since 2012 updating the dictionary (although the last time iSpot used it was in Sept 2014).
The were:

and then there were some fields that did not make sense. To my mind they were totally redundant. They were

And then at SANBI we insisted on the following being added:

But there is no manual as to how the dictionary is used, and what the constraints on the fields are.

It seems to me that the following fields would be useful (yes, they can be constructed real time, but why - they are constant text fields):.

What would be useful is a manual of how the dictionary is used and what the different fields are used for and any limitations of the size and type of data.

Thanks for the details of the dictionary. I would agree with your suggested additions. And that a manual would be good. It might also be helpful if there were instructions for the programmers on how to incorporate a new dictionary.

By way of update - I have now put my Norfolk comfrey down as ‘Indet Comfrey’ with some explanatory text, so at least now anyone searching for comfreys can find the thing. Not a terribly satisfactory solution though, especially for these newly identified taxa or hybrids when we want as many people as possible to know what they look like in order to get a better handle on distribution.

Please complain about the out of date dictionary …

I am biding time until other more pressing things are ‘fixed’ - but then yes, I will.

Hell will freeze over … 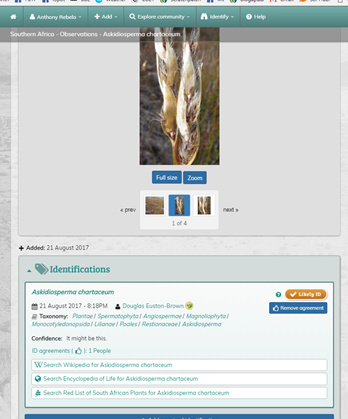 But look in the dictionary page: 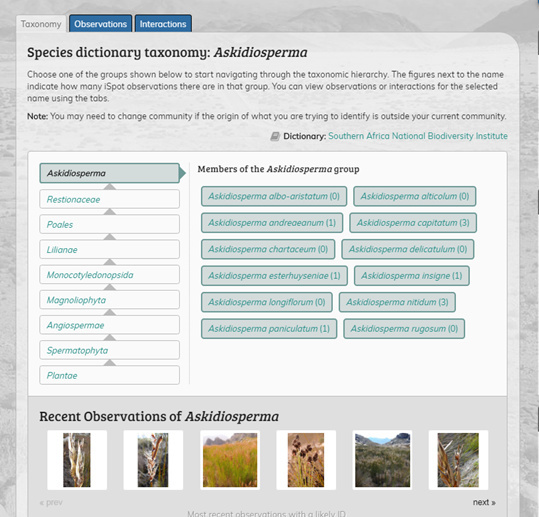 It is just a comedy of bugs! If only it were funny! And these programmers are happy to show their faces in public? I would be too ashamed …

BUT WAIT IT GETS BETTER: There it is: So it is there after all! 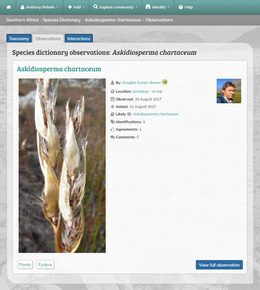 But it is also missing on the SURFER:
Sorry “Browser”: it is not there - missing in action!
(PS: excuse the beetles: did not know at the time of the Sept 2014 update that Hydrophilus was a hemihomonym and the beetles got coded as restios having the same genus name).

When is the dictionary and the ID bugs and the Likely ID bugs going to be fixed?

No longer the case as someone has agreed with you (makes a change!) But it appears to be a Bad Code Error.
Despite this (which popped in)

utter cheek.jpg760×139 21.6 KB
I give you this
TIRED of Waiting?
Copy from the address bar and paste into a new Browser page - almost instant result 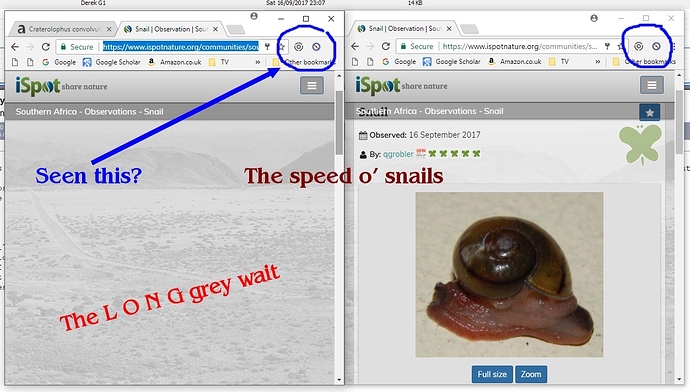