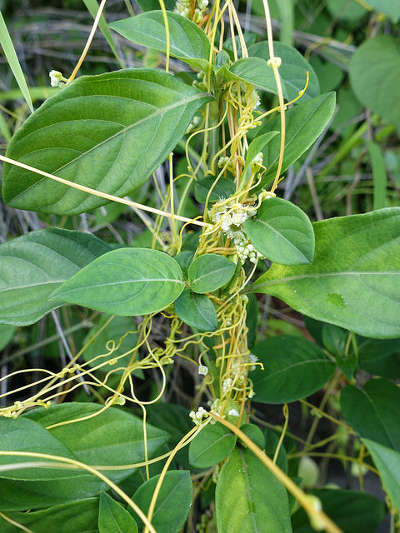 The plant parasite dodder grafts itself to multiple hosts, fusing the plants into a superorganism that can produce surprising effects

Hi Lavateraguy, thanks for this reference. The article was very interesting; Dodder doing a free service to its hosts, which is in its interests as the host is its meal ticket. Evolution at work before our eyes.

I read about this in a recent British Wildlife - and I recall (though I can’t find the reference at the moment) a similar type of communication has been suggested to occur via fungal myceliums (mycelia?) in woodland.

A reference to the mycelia web in woodlands, the wood wide web, as they called it, in the the article in Sc. American.

Plant organs can either be determinate or indeterminate, i.e. grow to a predetermined size and stop, or continue growing indefinitely. Flowers are determinate (ignoring hose-in-hose primroses and double-flowered daffodils), shoots and inflorescences can be either, with woody perennials particularly having indeterminate vegetative growth. Leaves are almost always determinate. But there are 7 or 8 exceptions with groups of plants with indeterminate leaves.

Welwitschia mirablis is perhaps the most remarkable, possessing only 2 leaves which grow indeterminately becoming increasingly frayed. 4 or 5 unrelated groups of ferns have indeterminate leaf growth. The climbing fern Lygodium is the best known; a couple of species of this are invasive in the South-Eastern United States. Jamesonia and Salpichlaena are also indeterminate, while Nepholepis strikes me as being on the borderline; its frond apices are pinnatified rather than pinnate, like many ferns, but it continues to produce more and more smaller and smaller pairs of lobes, so it’s converging on a limit rather than growing indefinitely. Gleicheniaceae is a group of 6 genera with indeterminate leaf growth.

Indeterminate leaf growth has also evolved independently in two genera of the mahogany family (Meliaceae) - Chisocheton and Guarea. These have pinnate leaves, terminated with a bud (pseudogemmula) rather than a terminal leaflet, which produce new flushes of pinnae. In one species of Chisocheton buds are also produced along the rachis which give rise to flowers and shoots, which brings to mind that leaf vivipary of Bryophyllum, and the viability of propagation from leaf cuttings in some genera, such as Begonia. In Chisocheton at least not all leaves are indeterminate; juvenile leaves are determinate (and sometimes also simple). Chisocheton has secondary phloem growth in the rachis; the feature is shared by the related genus Dysoxylum.

It is not necessarily the case that all species of these genera share the derived trait of indeterminate leaf growth. There might also be other genera that I haven’t found (and I haven’t explicitly checked segregates of Guarea such as Neoguarea and Ruagea), but I’ve read that Chisocheton and Guarea are unique among angiosperms with regards to this trait.

Many years ago I started compiling a database of leaf lifespan but as far as I recall it was never published as a paper and database now lost. Did do other things in this general area such as https://onlinelibrary.wiley.com/doi/10.1111/j.1558-5646.1999.tb05367.x PHYLOGENETIC ANALYSIS OF TRAIT EVOLUTION AND SPECIES DIVERSITY VARIATION AMONG ANGIOSPERM FAMILIES It was done at the time when large phylogenies were just becoming available so you could look at evolution across all flowering plants.