Re iSpot changes - from the iSpot Team

We thank you for your concern, comments as well as feedback and will keep you, our online community, informed as we progress with this rebuild.

This build on the new platform was scheduled for October. So my guess is that everything that is going to be done will be done by then. A bit like Sept 2014 when the teams departed and we were left with the mess. Of course, we will only get a mess if we allow it.
But changes is an add on. It was not included in the original scoping. The question is whether the development team with spend the time until October doing CHANGES instead of debugging (Changes is more important than many of the bugs) or if the debugging will be added onto the time taken from CHANGES. We will see.
It is not usual for iSpot to tell us the schedules. And if you really press them, that is because they usually dont know. The programmers are a law unto themselves and us mere iSpot mortals must quiver and take what scraps they deign to discard for our pleasure. Consult with us? Tell us anything? You must be mad!

(Changes is more important than many of the bugs)

You are more sane than I thought! But, I suggest, some of the bugs, deficiencies and tweaks will be easier to fix.

The categories are pretty course, but that is a deliberate choice and I understand that thought has gone into it. As I was originally recruited to this site iSpot was designed to be the ‘friendly uncle’ who takes a budding naturalist out and shows them things. So necessarily the categories were set at quite a high level - if you are just beginning you might know the difference between a fly (diptera) and caddisfly (trichoptera) so if before you could contribute you had to work that out it would be off putting. Actually I get the impression (subjectively rather than based on real evidence) that even the current ‘invertebrate’ category causes confusion with a lot of new people putting stuff down as ‘other organism’ rather than one of then inverty-thingummies.

A similar reasoning was behind the choice of only a limited number of habitat types.

Early on I suggested that the iSpot reputation system should allow you to lose reputation for getting stuff wrong as well as gaining it for getting it right. In the real world that is how it works, both getting it right and not getting it wrong matters. iSpot deliberately chose not to do this as they had a philosophy of nothing negative happening to people (again to encourage people just venturing into natural history observation) and losing reputation points would count as negative. That argument has a lot of merit.

The major problem I have with the habitats is that approaching 50% of my observations - mostly various classes of urban ruderals - don’t fit any of them. I’d also like a distinction between arable and pasture, but that would leave a residue of farmland sites not falling into either category.

We have a scheme available for iSpot use or heirarchical habitats, configured to the overarching IUCN habitats. Unfortunately, the programmers are not interested in implementing this. It would be a cool way of allowing southern African’s to include the national vegetation types for those capable (most have trouble at the biome level of merely Afromontane Forest, Eastern Subtropical Forest, Albany Thicket, Grassveld, Moist Savanna, Dry Savanna, Succulent Karoo, Nama Karoo, Fynbos, Renosterveld and Strandveld), but would also allow specialists to go finer to the community level.
Then your farmland could be arable, pasture (and even “other” for future unpacking), and Urban Parkland could be divided into several other types.

I’m fairly sure that this topic was discussed on the forums a few years back.

As habitats are implemented as tags, there’s no reason why the users can’t be presented with an expandable menu, nor why different menus can’t be used for the different communities. It’s a bit more complicated for filtering reports, but it boils down to an a list of ORs on a database query, which is not rocket science.

Different menus are available for different communities. The problem is that they are not properly integrated. A hierarchical system is thus better (i.e. the habitats need a taxonomy ((the same is true for interactions))).

The big problem comes for users who want to cross communities. Integrating the taxonomy and habitats is an issue that iSpot has not dealt with at all.
The way I see it, there should only be one dictionary on iSpot, with communities viewing their relevant taxa. Similarly, there should be one habitat dictionary, with communities viewing their relevant habitats. Different dictionaries and different habitats are not the way to go, especially if we are going to encourage new communities to join.

The advantage of a heirarchical system is that Hong Kong could have 20 different “Urban Parkland” and southern Africa just one type, and yet a filter could access this with just a single tag name and without the need for ORs and OR NOTs.

Agree, at least a few more would not hurt, one for ‘urban area’ would seem desirable to me.

We’d probably want to stop short of NVC though (http://jncc.defra.gov.uk/page-4259)

Stop short of NVC? No why? I disagree?

I think that requiring people to do NVC will be totally inappropriate, if possible. But having the capacity to allow those who do want to use it is certainly to be encouraged. However, it needs to integrate hierarchically with other classifications, which may take some effort

(Having just integrated our southern African vegetation types and Marine ecosystem types with the IUCN for our national Red List and Conservation Assessment databases, it is not that impossible).

Allowing people to use more complex categories isn’t the same as forcing them to. We can identify observations to genus, after all. But with habitats it would take some thinking about, and might not add much for someone trying to extract useful information - a lichen habitat could be regarded as woodland, or a tree with bark of a particular acidity, or degree of shade, or run-off, or mossiness and so on. Many acid habitats in the UK support lime-loving lichen on man-made structures like cattle troughs, and so on.

The question I don’t have the answer to here, or maybe on of them is “Who are the end users?”. I find ispot useful because I spend a lot of time looking at stuff on my own, and it’s useful to have ids confirmed or corrected. But I’m not clear whether obs go any further than that - do county recorders use them in compiling bird or moth reports, for example?

I occasionally add identifications to tribe (e.g. Anthemideae or Cichorieae) or family (e.g. Apiaceae or Brassicaceae); I’m not the only one to do at least the latter.

I dont know about the UK.
But we feed the southern African data regularly to at least 10 government institutions and at least three national projects. That is apart from requests by taxonomists and conservation scientists and EIA specialists. But the majority of these get their data from filters and projects, so we only see the really big data requests.

iSpot data are really used!!!
But the major end users are really those who are putting in the data. Look at our projects: there are lots of users making species lists for conservation areas and local farms. There are projects on threatened species and monitoring projects.
Our profile of user is quite different from the UKs.

Habitats will not require much thinking, provided that it is heirarchical and not haphazard (it is haphazard at present: Mountains is an absurd habitat in southern Africa - quite meaningless. Even an “alpine” class (I dont think the UK habitat equals this) is better regarded as a community in Fynbos or Grassveld, than as a separate category.)

But: a man-made concrete trough cannot by an stretch of the imagination be regarded as Heathland. This level of habitat is man-structures and - if such fine detail is required - would need to be included under that classification, and not under natural communities.

We try - not that I am a VCR - but I have gone through my home county records and passed them on to the local VCRs after checking and editing. My concern (or one of them!) currently is that many of the BSBI VCRs such as Cicuta appear to have quietly given up on the new ISpot and without the benefit of their validation of records, I am concerned that the new records simply won’t make their way into a records database (plus I am personally missing the ‘high level’ ID verifications - the VCRs word on tricky IDs is final)

Cicuta is having problems accessing iSpot. (The rest of the VCRs, and Tim Rich, do seem have to reduced their participation.) 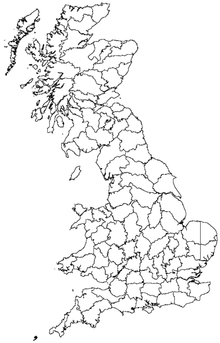 A vice-county (vice county or biological vice-county) is a geographical division of the British Isles used for the purposes of biological recording and other scientific data-gathering. It is sometimes called a Watsonian vice-county as vice-counties were introduced for Great Britain, its offshore islands, and the Isle of Man, by Hewett Cottrell Watson who first used them in the third volume of his Cybele Britannica published in 1852. Watson's vice-counties were based on the ancient counties In...

I want to thank you for your reply, but the site says I am posting too many replies and should allow other people to contribute and that I should not dominate the content.
I hope you dont mind if I thank you.
Also “Thanks” is too few characters.

Or am I supposed to LIKE it and that = thanks?

We’ve had a similar discussion with new users on occasions with regards to thanking people for identifications. Yes, we can understand why people might want to express thanks, and even why people might like to receive thanks. But doing so had the effect of adding noise to uninvolved active users’ feeds via the then notification systems (changes and unread) so there was a consensus that the expression of thanks should be used sparingly. (Before the 2014 changes, when unread was usable, if everybody had gone around expressing thanks it would have made unread unusable.)

The dynamics of the forums are different, but the avoidance of public clutter may be one of the reasons behind the adoption of like systems on social media. (Like counts also act as a sort of popularity/reputation indication, but as often as not it’s just a marker as to who is part of the in clique, and acts as an exclusion mechanism as much as an inclusion mechanism.) I haven’t thought about the topic before, but there’s probably sociology/pyschology/informatics papers out there on the operation of like and flag systems.

On another forum my likes to posts ratio was well down the rankings, so I thought I wasn’t a particularly admired participant, until I was nominated for poster of the year in the annual forum awards. In hindsight my reserved and sober mien may have affected the likes to posts ratio.