The sterling efforts by some users to tackle the mountain of invalid IDs is laudable, impressive and occasionally depressing.
But I find myself being - perhaps excessively - frustrated by IDs that are very probably right, but are beyond my skills; and have no notes to explain the distinctions involved. Example here: 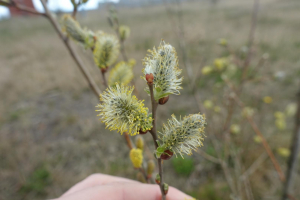 Observation - Willow - UK and Ireland. Description: Don’t know if it’s possible to ID from just the catkins? Growing on dry grassland that is habitat fo


The ID added takes the genus level to species. I’d agreed with genus (as had others).
What to do? Spins seems very knowledgeable, so is probably right.
Do I leave my agreement at genus, which helps block a more accurate (and probably correct) revision becoming “likely”? Or do I spend a good while reading up, trying to agree to a species I’m really not sure about?
In another post, https://www.ispotnature.org/communities/uk-and-ireland/view/observation/820792/salix-caprea
I questioned a comment by another user, that pointed to two species, again without rationale. In response, the reply was “Willows are much less difficult than most people assume, but you have to want to know.” Well, I do: but it would take me a lot longer to do so unaided than it would to follow up a hint (such as “look at [these features]” or “see [web address]”).
I appreciate that some experienced naturalists have spent a lot of time developing their skills, and may be unwilling to dispense their knowledge too freely: it’s a point of view I’ve encountered several times. But iSpot is about learning as much as aught else.
After that ramble: the actual questions:
JoC 15 April 2021 11:08 #2

I noticed this same willow post just now & had the same thoughts as Amadan. Given guidance by those who know I might be able to agree some posts AND also learn about the taxon at the same time.
.
I realise it’s time consuming for them, but to those who have the time to provide such guidance I am grateful.

I agree with Amadan too. It’s also tricky when (as in the second observation Amadan has linked to), two plant experts say quite different things. To be honest, if people who are experts don’t give a rationale for an ID and I don’t know much about the subject, I tend to move on now. I really enjoy helping to research things for people who are starting off on a subject, where I think I might know a little bit more than them or have some useful links (see for example me and Mags having a go at Poplar ID for Surreybirder at https://www.ispotnature.org/communities/uk-and-ireland/view/observation/820664/unknown-tree - the experts did come along eventually but we’d had an interesting discussion by then, and Surreybirder was inspired to put up some more poplar posts as a result, and I learnt something about Poplars!). I am much less happy to spend ages researching things when, as Amadan says, an expert has provided a specific ID with no hints or tips as to why. It just feels a bit soul destroying, and pointless.
On the subject of what to say, I like Mags’ comment in her signature: ‘Please consider adding the features that led you to an ID when you can, it’s so helpful for learning!’ Maybe experts don’t always realise that a bald ID with no notes is not helpful when you don’t know much, so I think we could at least ask politely for a rationale in Amadan’s cases 1 and 2 above. I agree with point 3 too.

For years, I have been asking FIRST agree-ers to add some words of support for their agreement particularly when the Organism or ID is ‘difficult’.
Two very knowlegeable people responded with ‘I don’t have time’.
I am constantly asking people to add reasons why they are ‘…as sure as I can be’, (“bald ID”) yet getting no agreements.
.
And I got into swirling water in iNat challenging experts to their agreements.
We all need to set examples when we can - make it plain to others that it is desirable. I LIKE doing that but I make time and have energy.

You articulated my own thoughts so well.

Yes - Mags’ signature comment says it very well.
As with all these things, I think it important that new users are encouraged to provide ID notes (as well as more than 1 photo, habitat details, and other stuff) from the outset. And also, I am aware of my slightly hypocritical attitude, because I have been guilty of minimalism more than once.