Something that is starting to become possible on biodiversity atlases is to record a species as being not present. This is not possible on ispot but I was thinking about it this morning when visiting a nature reserve that used to be very good for a particular species of bird but I have not seen it there in recent years and nationally it has suffered a huge decline.

Interesting idea - but it would be important to know
a) whether the ‘non-observer’ had the critical ID skills and
b) that sufficient effort had been expended
c) whether the location information used in trying to re-find the species was adequate for purpose.

As a concept, it would work well for e.g. individual ponds which once supported GCN, but less so for a moorland/montane species which might roam over a wide area or species that naturally come and go a bit - such as fairy shrimp

I think most recording systems (as opposed to ID support systems) do allow this. For instance MapMate which I used to record allows a quantity of ‘-7’ to represent ‘not present’.

Yes, there are hours of fun in negative records. I have four types:
Not found but habitat still looks suitable - so worth another look.
Not found, habitat has changed - so after some management the species might re-appear.
Not found, habitat gone. E.g. the wood where the lesser spotted woodpecker nested was felled one Christmas while the adjacent CCW office was unoccupied and the site is now a housing estate. But the record is of historical interest.
Not found, wrong time of year - for use when studying the seasonality of a species.

John’s and Jo’s (JoP) suggestions are soundly professional. But it is one thing to find that something is absent (after a presence record), but quite another to say ‘i cannot find it’. Absence records need to be ‘collected’ by persons qualified or after intensive study.
NBN used to show Absence records but, typically, I cannot find an example
.[quote=“miked, post:1, topic:442”]
and is not possible on ispot
[/quote]
cannot be true - I can easily make an observation suggesting that, and a case for why, Hartigiola annulipes is absent from Orkney. It is likely to be this - (absent) that is, in Orkney. 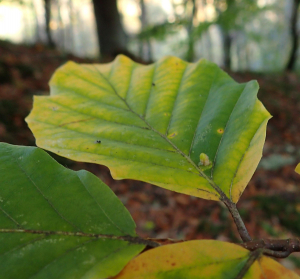 Observation - Beech leaf Gall - UK and Ireland. Description: Absolutely prolifiic on the few trees I studied. I then tried to establish via drive Northwards whet

Absence records can be very useful when trying to find out the date when somethign arrives. It may be absent at present(?) on Orkney but how long until it arrives there. Do you have beech trees there, how long have they been present, was there a date when they were introduced by man?

True but I think there needs to be some clear targeted recording effort to make it sensible to have a record of absence rather than an absence of a record.

To take an example of my local patch I do have a record of the absence of certain species of clearwing moth for which I have searched, at the right time of the year in appropriate habitat, by using pheromone lures. Because a specific targeted search was done and none found that sounds interesting.

However there are thousands of other moth species that have not been recorded there for which I’d not find it sensible to record their absence explicitly, even though I have been actively surveying for moths (using various techniques) there for over a decade.

Repelying to David Howden, the problem with Mapmate ‘-7’ is that MM treats it as a “record” and shows it on the distribution map… For that reason botanical recorders in Hampshire are discouraged from using it.

Another problem with ‘not present’ records is that it is philosophically not possible to prove a negative. A bette phrase would be “not found,” suitably qualified.