Something (similar) for the weekend?

Did you know that dragging your Organism-photo to Google Images may give you an ID?
Why have Citizen Science if it works? It does and it doesn’t.
I tend to use Google so this might not work in your own fancy Browser.
Open Google Images and look for anything. Grab your image and drop it into the space 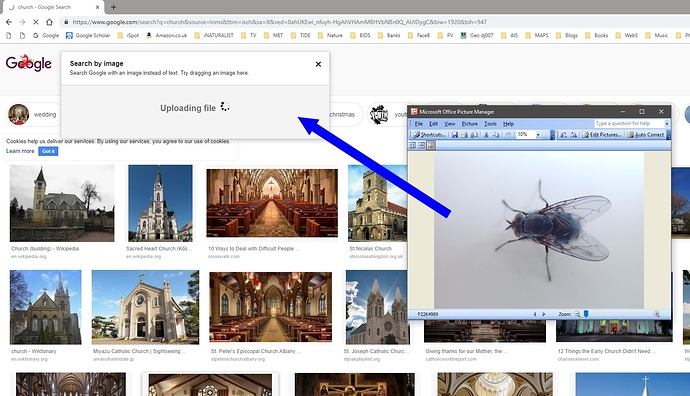 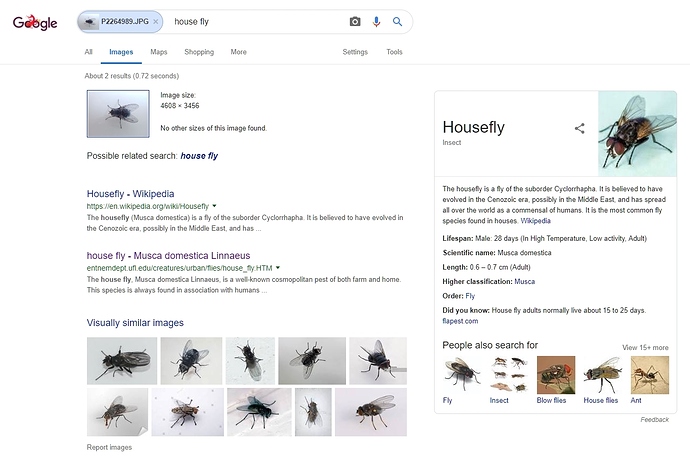 AI Test 2.jpg1294×869 311 KB
Of course, it isn’t actually Musca domestica but who cares?
It’s time consuming but can be entertaining - I’d be interested in your anecdotes (but I may be the only one)
.
AI is used extensively in iNaturalist (heard off it?) You add the images much as you do here and up will come suggestions, Some people even accept them. Later, at night, under the cover of darkness, AI trawls the whole iNat Database and extracts all the new Likely IDs (called Research Grade there) and drops them into the GBIF Portal as Records.
Look - https://www.smithsonianmag.com/innovation/ai-plant-and-animal-identification-helps-us-all-be-citizen-scientists-180963525/
And if you have a few more minutes…
https://www.youtube.com/watch?v=-JlxuQ7tPgQ&feature=youtu.be
Tony_Rebelo 1 March 2019 16:33 #2

My - you guys are desperate.
Approaching our half million observations on www.inaturalist.org
And we have AI on inat to: just put your cursor on the ID box and it gives the most likely options.
And right now our southern African observations are being used to train the AI for southern Africa, so it will get even better.

Thanks for this, dejay.

I wonder why he thinks we are desperate.
WE are cool, gentle, enquiring and profesional. I really enjoy it here, where people talk to each other in a civilized way. And, you know, I don’t think we are ready for AI just yet; to be honest, AI is really not ready for us yet, by a long way, we much prefer to add up the evidence, presenting it gently, in hushed tones and in that slow rather British way. we love it.
I did test the Artificial Intelligence in iNat. It could have been worse. 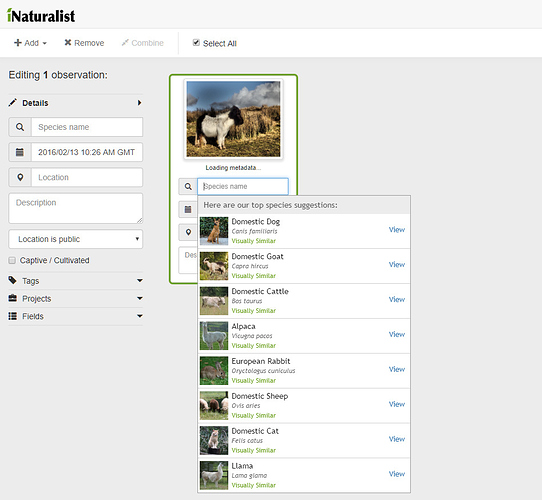 In your example the AI seems to have recognised domestication syndrome.

There’s a PlantSpot app for Android which is supposed to use AI to identify plants from photographs. As I don’t have a network connection when I’m in the field I haven’t evaluated it.

Neat: I’ll see if something similar works on Firefox. But what a pity it rattled someone else’s cage.

No, didn’t know about this. I tried it out on a Camberwell Beauty, which it did recognise, but will have a go with some more exotic species when I have a moment. Thanks for the tip.

There are some scary / impressively accurate auto-ID systems out there. Check out the Merlin bird ID app (available in both iOS and Android forms I think) for instance.

Over 900 gorgeous Slime moulds in the New Gallery. AI ID would be impossible! 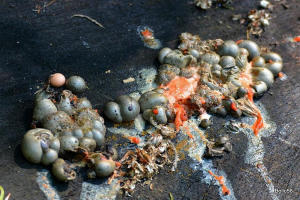 Reopening the discussion
My guess is that there are plans to introduce Artificial Intelligence (AI) identification to Spot. Designed to help beginners, the ID Bot will make suggestions the moment you add a photo - Corvidae, it will proclaim. We might then need to select Corvus corone from a list of 12. well and good.

But if AI gets it’s own way it will choose the species, sub species or var for us, not so good.
I came because I found this in NBN and GBIF - doubtless illustrating how dumb AI really is.
I add it now, because I reported it and it will be gone soon
You may wish to look for y’rself Corvus splendens Vieillot, 1817 and Search: SPECIES: Corvus splendens | Occurrence records | NBN Atlas
40 UK Records for the Indian Crow - only AI could make that mistake 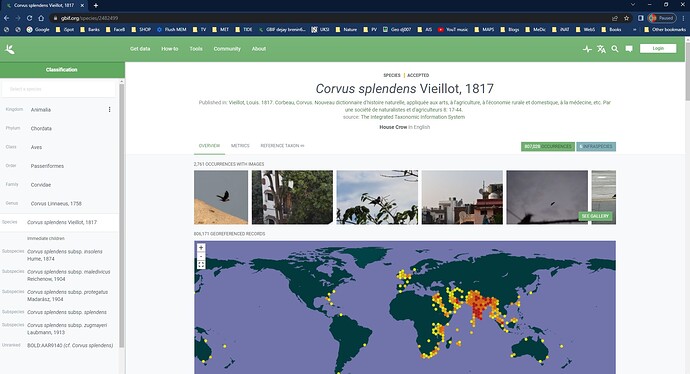 In the late 1970s I took what I believe was the first undergraduate AI course in the UK. The systems we looked at then could, for example, differentiate between a square, a triangle and a circle and not much more. Spheres, pyramids and cubes were just about possible but only if given completely shadow-free lighting. AI was a baby.
That baby has learned a lot since then. It has learned to play games. It has learned to separate plants from animals. It is getting pretty good at recognising individual humans but still makes some mistakes. It is also getting remarkably adept at recognising plant and animal species … and is probably better than most of us on here! Given some of the rather random and poor quality photographs it is asked to look at, it’s hardly surprising that it makes some mistakes. The baby has gone through childhood and has become an adolescent. Like a human adolescent it sometimes thinks it knows everything and cannot possibly be wrong. It is then, surely, up to it’s teachers - us - to think about what it tells us and to politely but firmly disregard it’s errors and, where possible, to help it to do better next time. It needs that continuing education to help it to develop; like an adolescent, it needs positive guidance rather than negative criticism.
The flip side is that we should look at any result we get from an AI system in the same way as we would look at an answer from any other source and start by subjecting it to a reality check: is it a sensible answer? If we fail to do that and accept a wrong answer then the blame is surely ours, not the machine’s.

Yes. It is already hard to separate AI from reality though.
I was asked to report the specific issue to these https://projectsplatter.co.uk/ They will already be receiving records from driverless car management systems.