Test poll see other message associated with it

My favourite is cotton grass as it can grow in very inhospitable conditions and makes boggy places come alive with its white fluffy appearance, it can also make very nice photos if you are prepared to get wet!

The Show Results button is giving a mean of the numbers, rather than a bar chart. (I think that it’s currently two votes for cotton grass and 1 for hawk moth, given a mean of 3, previously 3.5 when it was one vote each.)

Any ideas how to switch to bar chart as I though I had selected that option but clearly it is not showing.

No ideas on how to switch - one would have see how stuff is stored on the server, rather than how it is served to the client, but what seems to have gone wrong is that you selected number rating rather than single choice or multiple choice.

Edit: but having gone to edit my test poll, I see a line “[poll type=regular]”. You could try replacing the corresponding line in your poll.

Will try again this evening. As an aside can you see a way to generate polls yourself (just as a normal user rather than admin).

It does seem to be showing the number of people that voted for each option next to the option itself except that you can’t see my vote as that url goes out of the box which is visible.

This doesn’t look quite complete documentation, but it hits some of the spots. 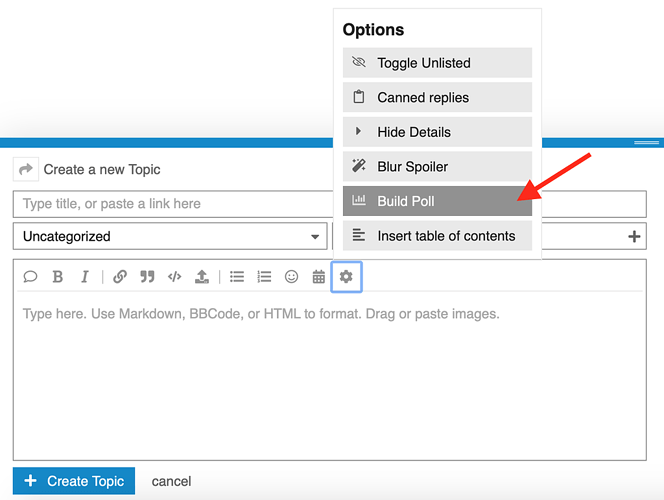 How to Create Polls

Enabling polls Polls are enabled in Discourse by default. Site admins can disable polls in their community via the poll enabled site setting. Creating a poll The easiest way to create a poll is to use the poll builder. The poll builder can be...

Please do some careful ‘considering’ before you inaugurate Voting, Favourites and Winners (and Losers). Not everyone will be in favour of making iSpot in the least competitive.
Also remember that few of the ‘seniors’ are yet to be impressed by the quizzes.

It would only be competitive if you happen to be a daisy and the community likes dragonflies more at that moment.

We have both created polls that seem to work technically so next question might be do we actually want to have a go at the voting for real.

Would need some suggested posts with organisms that people want to say are their favourites and perhaps one poll per month or just have them occasionally at random times.

Also clearly I as admin do not have to set them up, anyone can do that but there does need to be a collection point for suggested observations and someone to decide on 10 of them (actually can have any number but don’t want too many or they won’t show up properly).

Will wait for more comments on this to see if others have completely different ideas. Perhaps not ‘favourites’ but some completely different question/idea, one of the main ideas is to get more people involved and perhaps those that don’t normally look at the forum. The votes could be advertised elsewhere on the site.