I used to be involved in the water monitoring of a site in the Tees estuary. What’s mentioned here is the tip of a massive iceberg (and, to stretch the metaphor, one that’s melting fast):

Are the dead shellfish littering our beaches evidence of a toxic waste...

‘Divers reported that the seabed immediately south of the River Tees was a “dead zone”: even the seaweed was dying.’

I don’t think you understand - we are trying to keep the PM in post. Without him, many of the Ministerial team would be out of work. Can you just hold off for a while?

We have got an industrial archaeological site locally to my area that has now been fully excavated.
Over a period of several years you could smell the chemicals that were produced on the site as they dug down through the layers. Much of the spoil released smells in response to rain to there were many piles covered in plastic.
I have no idea where all the poisoned soil was taken.
The site is now being populated with mail order warehouses. 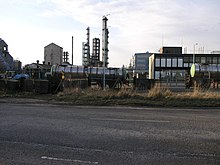 Coalite is a brand of low-temperature coke used as a smokeless fuel. The title refers to the residue left behind when coal is carbonised at 640 °C (1,184 °F). It was invented by Thomas Parker in 1904. In 1936 the Smoke Abatement Society awarded its inventor a posthumous gold medal. Coalite is darker and more friable than high temperature coke. It is easier to ignite, burns with an attractive flame, and is lighter than coal, making it an ideal fuel for open domestic firegrates. Drawbacks are i...

It was essentially a gas and coking works that produced coal tar based industrial chemicals as a by-product.

That Coalite plant was incredibly dangerous. The son of a farmer in the area advised that any offspring he had would be at very high risk of genetic defects.
But soil is/was an interesting one. It was classed as a mirror-entry in the European Waste Catalogue:
17 05 03* soil and stones containing hazardous substances
17 05 04 soil and stones other than those mentioned in 17 05 03
A testing regime was required to determine if it could be classed as 17 05 04 - then it could go to any landfill (often used as “daily cover”).
If found hazardous, further testing was needed to see if it could be accepted at a hazardous landfill facility. It might fail to meet the criteria.
Over the years, I have assessed chemical data from many sites. If I determined that they were hazardous, the job usually “disappeared off my radar”. But I did notice with interest the hauliers names on wagons taking soil for profiling into golf courses and development sites…
I suppose that, in these days of having “taken back control”, we will be ditching the European Waste Catalogue. This is called progress.

It did look like they were somehow treating it on site under plastic sheets.
No matter what there was an awful lot of very smelly soil for several years.

Various treatments were trialled - “soil washing” seemed promising (in situ or excavated), but the problem was proving that it had worked. The standard chromatographic setup could not distinguish between hydrocarbons (a common pollutant) and detergents. So the total hydrocarbons could appear to have been increased by the process. The same was true with bacterial “digestion” - microbial cell wall material tended to interfere.
Pollutants can bind very strongly to clay particles, so the process was better suited to sandy soils. That might also have accounted for apparent increases in pollutants during processing - they were being freed from the clay matrix by agitation.
Sorry: bit of a hobby horse for me!

I have a feeling that soil washing may well have been stopped due to the fact that rain water was releasing the chemical smell. It would explain why many piles of material were covered with plastic.
It may be that keeping the material in dry air under plastic allowed the toxins to break down.
The natural soil is wet clay with a river close by. Rain would have just collected under the old floor slabs and pushed the toxins to the surface releasing the smell.