And this is supposed to be pleasurable?

My excitement at having gathered spring observations yesterday was rapidly quelled as it took me around six hours to post eleven observations. This morning, with renewed vigour, I set about trying to upload the rest of my observations.

This went well to start with, but after perhaps another six or seven hours of trying I have only managed to upload six observations, many of these are sub-standard as I wasn’t able to post all the images I would have liked to.

The photo’s simply would not upload, and, on occasion when they did, the hour glass tab continued to spin (much like my head).

I like iSpot, I have learned an enormous amount from the people that contribute to it, but will I live long enough to see another plant or invertebrate icon added to my profile? Probably not on current form.

I think there’s been something wrong with the website today - I wasn’t able to access it at all until after lunch ( a grievous disappointment as its a nice lunchtime break from more boring stuff!). Don’t give up! You had some good posts and I have been challeeged by them, so I am happy

Thanks for the encouragement.

Although I’m a relatively new iSpotter I have invested quite a lot of time into it, and problems like this are not uncommon; I have to ask myself, do I cut my losses now? Or carry on in the hope that things will improve?

On a separate issue: if you’ve been challenged by some of my posts I suggest it’s down to my poor photography skills

Here it was timing out until 1100, at which point it switched to 404s (i.e. the webserver was answering but refusing to deliver pages), and I didn’t get on until 1530. I’m thinking of suggesting my cousin’s business (www.ippatrol.com), but if it’s been inconsistent between users then maybe it was a load problem or denial of service attack rather than a simple outage.

Yes, 404 also started to appear for a while.

To think iSpot was my life and soul. Glad I am gone. Thoroughly enjoying myself on the other side …

looks a little sour, that.

keep going! You’ve had some great posts lately and they’ve challenged me, which is v good for my brain plus I’ve enjoyed doing the idents.

If you would still join us occasionally, one of your northern UK comfreys looks interesting and would like some more info if you have it - see Changes

please post the url: I dont do the main site anymore. 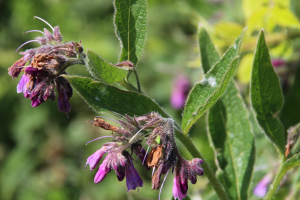 Good for you. But please don’t piss into our tent.