Another example of reputations not working 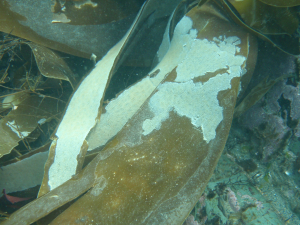 
This was in ‘other organisms’ but had a likely ID of Sea mat (Membranipora membranacea) with 2 agreements. So I agreed the other ID, changing the group to inverts & switching likely to electra pilosa. I then removed my agreement, but the likely didn’t switch back
dejayM 14 March 2018 19:54 #2

Been. By moving my agreement back and forth, Likely followed me. Maybe now your ‘reputation’ will behave. Try?

That is too weird, that now it stays with ‘just’ Gramandy where before it wouldn’t with both you & Gramandy!

the original ID was as an Other Organism - Likely was based on our OO scores - mine is relatively high.
Now it is based on scores for Inverts - you should ‘win’ every time with a Badge and 1543 BUT Graham has 2592, so it might be a difficult job for the Algorithm.
Nevertheless I can over-ride Graham with my meagre 1167 (as you can see)
I may be the effect of OO residue left in the calc
A job for the Coding team! @miked
I have seen this a few times in recent months