The Collins Guide by Chinery (1986) was a remarkable book. Experts praised his choices, the illustrations were excellent, and it fit into your pocket. For a beginner, it was ideal.
Nowadays, it seems antiquated: no Harlequins, Willow Emeralds: Bombus hypnorum was mentioned, but not recognised as a UK species.
It’s stretching things a bit (metaphorically and pocket-wise) to call Brock’s book a Field Guide. It’s twice as thick, and larger all round. But it’s a worthy successor in many respects.
The illustrations are photographic, and of a good size and quality. The introductory section has a glossary, and sections often start with an illustration of the general anatomy. And there’s the nowadays-de-rigeur millimetre rule ion the flap. Particularly useful (to me) is the mention of similar species.
I’m not capable of judging the selection, which, with over 10,000 species to whittle down to less than 1,500 must have been a major job in itself, but I suspect that is also partly a matter of opinion. (And prediction - which species will decline, and which will benefit from climate change?)
There are some surprises, too. It’s generally considered in iSpot posts that female Panorpa (Scorpion flies) are indistinguishable from photos. Brock provides an illustrated crib (see photo). I’m interested to know what the good entomologists think of it: 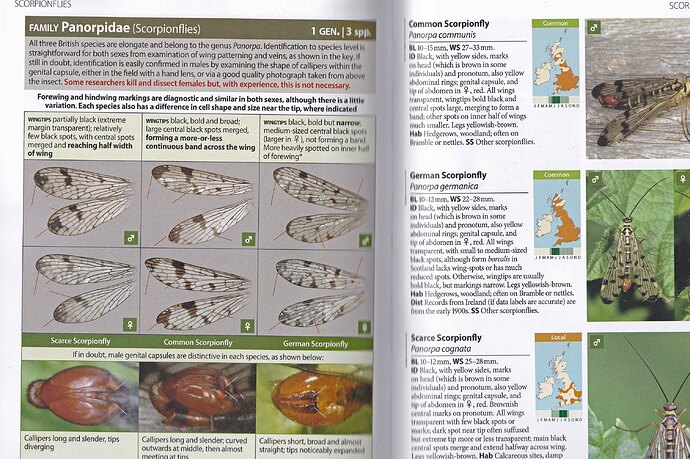 Does it have a broad taxonomic coverage and not just focuss on moths or other groups that the author happens to like or happens to have photos of?

The cover claims 1476 illustrated species, covering 316 families.
The photos are credited to various sources, you’ll probably recognise more names than I.
I rather like the headers that give some idea of the complexity. F’rinstance, the Tachinids are introduced as “145 gen[era] | 267 spp | 4 ill[ustrated]”
Possibly contentious is the tendency to try to use as many common names as possible, something the author is clearly in favour of. But I’ve never heard of Ichneumons being called “Darwin Wasps”.
I rather like the fact that sonograms for the Orthoptera are included - next best thing to an accompanying CD.

I have a copy of this, and also the same author’s earlier (and overlapping) " A Comprehensive Guide to Insects of Britain & Ireland":
. 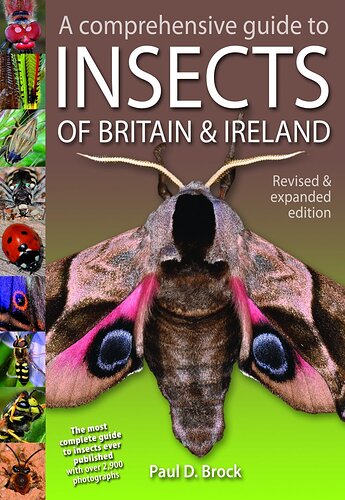 A Comprehensive Guide to Insects of Britain & Ireland

.
I like them both, as a generalist entomologist / naturalist, and both are useful and worth having. But, as you’ld expect, they focus on the most popular and visible groups - you won’t find enlightenment on the subject of many of the difficult families among the Diptera such as fungus gnats or non-biting gnats, or thrips.
.
I agree with Amadan that the most surprising thing was the confidence with which wing venation was used to identify scorpionflies to species level. I don’t know how well that holds but it is contrary to what I’ve read previously and always understood to be true.
.
As for the ichneumons, I’d never heard that common name for them before, although I do know that Darwin was so disgusted with their life-style choice that it challenged his belief in God.

Very helpful reviews, thank you. I had never heard that about Darwin!

The sentence fragment commonly quoted is “I cannot persuade myself that a beneficent and omnipotent God would have designedly created the Ichneumonidæ with the express intention of their feeding within the living bodies of Caterpillars”. On research I find that the sentence was completed with “or that a cat should play with mice.”

Thanks, I will make a note of that! I can’t imagine what a seismic psychological upheaval those Victorian scientists must have experienced, to find their entire world view challenged by the discoveries they made (at least for the ones who were as sensitive and thoughtful as Darwin was).

Amadan, there is now a good discussion on scorpion fly identification (and this guide) which you may not have seen: https://www.ispotnature.org/communities/uk-and-ireland/view/observation/831249/scorpionfly-panorpa

I bought this book having also got a copy of his previous book “A Comprehensive Guide to Insects”. The problem I have with both is that I’m not sure how many people want a comprehensive guide. I’m sure I’m not the only person whose interest has developed from butterflies and expanded slowly into other areas. As such I already have better books for butterflies, dragonflies etc. I found the new book particularly disappointing in its coverage of flies, which is not as good as his previous book, in my opinon. However, there is a lot of useful information and photos and for around £20 still good value.

I have it - I like the series as a whole and have four of them so far. I must admit that I rarely use ‘spiders’ (too complicated for me) but ‘hoverflies’ is in constant use. There are, of course, masses of insects, and this is more of an overview. But, combined with some excellent resources on the web, it is still very useful.