,an apostrophe is not allowed 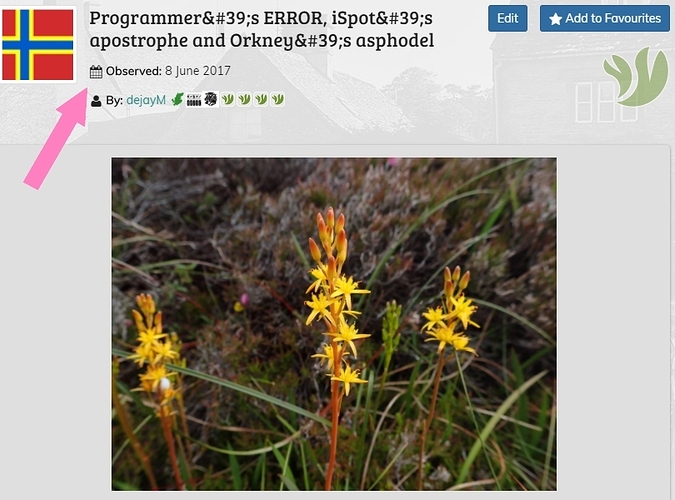 Ispot and OU should be very worried. Looking at the two trends after Sept 2014 the ZA total is impacted much less than the Rest of the world total. This is despite many additional potential issues in SA (often slow and unreliable bandwidth and dictionary issues). Were will Ispot be in 10 years time?

Ispot and OU should be very worried

Why should they be worried - THEY are not users, what’s the loss of a few moaning critics going to mean to the OU, even isPOT? How do they know how dissatisfied we are?
May I suggest that you take your protest a little nearer the heart of isPOT? to Observations. THEY won’t see them but the protest will be outside this Forum
See my https://www.ispotnature.org/communities/uk-and-ireland/view/observation/733660/sour-grapes

It is not just a “…few moaning critics”. It is about the loss of 8000 to 10 000 observations each month from the UK alone. It could have been 20 000 per month. Instead they are struggling to reach 2000. Why? You can estimate the missing data of 2017. Funding agencies will look at this numbers and reject the next funding. How can Ispot survive in the next 5 or 10 years? Is it likely?

You can estimate the missing data of 2017

I have and I know - honest Robert, But we are having NO observable effect on the people who control how isPOT runs.
We must shift the protest from the Forum as there are almost NO reassuring posts from Admin here - the last announcement was 15 days ago Re iSpot changes - from the iSpot Team .And there has been one “minor code update” which didn’t work. ðerek

This does not look good. Can you tell me who is responsible for Ispot after Jonathan Silvertown left. Is there anything like a board or advisory committee?

greyed-out
@miked Our UK Curator frequents these pages https://forum.ispotnature.org/u/miked/summary
Others are on our case but the route to those who really control how isPOT works is greyed-out - as they say!

one of my project titles now has the addition of " & # 39;s " (my quotation marks and with no spaces) the map area has also been expanded

You can edit out the apostrophe and amend the Map via edit. Take care - ANY Edit will only accept 10 Project Pix and you will lose any HTML text you’ve added. I have had to redo my projects because ALL the layout and links were burned by the recode.
This is locked out? https://www.ispotnature.org/communities/southern-africa/view/project/559270/my-noctuoidea (my-noctuoidea)

I find the search function frustrating or not working at all. I was unable to find a an obs using the taxon name. And what came up is 404 PAGE not found …

404 is common - many (most) links from the better days are broken but some posts have been removed so cannot be found in searches.
I had trouble with search. Observations are found via this Tab. 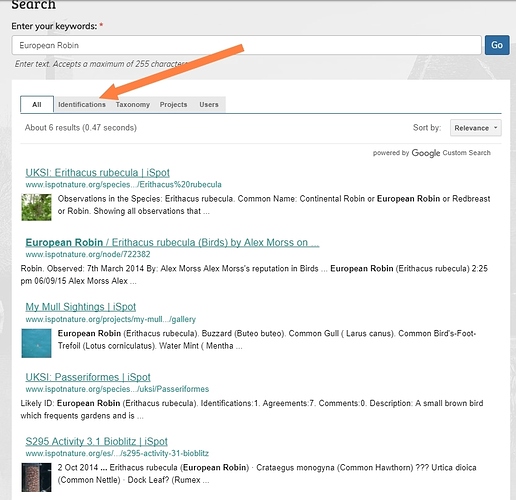 Thanks. However, a 404 should not be the result of mere days old obs. The other tab, users, is not working at all.

Only the ALL tab is working properly!

NOTE: PROJECTS
Project links are not working properly anymore. To get them to work you may need to change the community section of the url. Something has changed, I dont know.

This has been reported as a bug, I suspect it may have happened when they were trying to fix something else and did not notice this effect.

Some of my projects have been moved to the Chile community, some are still in Global. If I look at one of the Chile ones my community is changed to Chile and I have to alter community to do anything else.

Oh dear Ruth (welcome here). Projects were completely ignored in the recent recode - mine were largely ruined. Links particularly, now crash and burn Title-links just generate the 404 Error Code. I don’t think Chile or Global were in the vocabulary of the code-writers - Hong Kong have stopped posting.
I have taken to writing new projects though really I should wait until the next recode or a whole new team of understanding code-writers appears.

While rendering (slowly) an observation from the carousel the status bar flashed up “uploading (100%)”. I hope this is due the use of incorrect text.

Sometimes the rendering of the observation completes with the image and related buttons pastelled out.