Probably a HTTP/server glitch - a connection failure at some point. If I recall correctly I’ve encountered this before and a page refresh fixes it.

It seems to be working again. After failing with the changes tracker, I then got a “something has gone badly wrong” message. I cleared the cache, but the site wouldn’t reload.

There was a problem with the network at the OU yesterday affecting multiple areas including ispot so this might have been the issue.

Apologies for resurrecting an old thread but the problem persists. This morning I got

Mine seems to be working, but the text is “expanded” in the list view, with right-hand third not visible. Links open normally, though.

Yes. I think it has always been one of those difficult to trace, intermittent problems. Working fine for me now.

Returning to it, I saw “no changes…” although there was one agreement to a new post of mine, But it has missed agreements quite a few times in the past.

The server fell over at 05:31 this morning but came back up by itself 10 minutes later. This may have affected the usage stats.

Had ground to a complete halt at around 15:30 so I restarted one part of the system and it appears to be responding a lot better now.

Above and beyond to be doing this on Christmas Day! You - and the servers - are allowed a well-deserved holiday! (And the servers seem determined to have one in spite of your efforts

Many thanks for your efforts: sadly, it remained inaccessible for the rest of the day and earlier this morning (but, as noted elsewhere, the whole internet seems to have collapsed under the load last night).

Given I can get straight into the forum with no problem, it must be part of the iSpot website cluster that’s having problems.

Have just restarted part of the system and its running fine again - but it looks like its actually been offline for most of the last 24 hours. Our apologies. 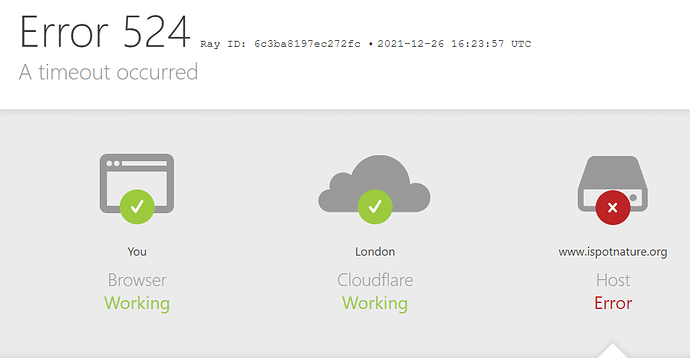 (For info only. I’m really not expecting anyone to work on this over the holiday.)

I had to kick it again. We don’t really know what’s causing this issue, I’m afraid.

Unfortunately, its the same for me, very slow, error message 524 coming up too. Sometimes its ok, then it freezes. Same issues intermittently for Changes Tracker and Obs Gallery; loading ok, then sometimes showing as empty or not loading. Will take a break, restart laptop and see if things have changed later.

Yes I’ve had iSoot problems for a couple of days - but my Skype is also playing up - have we had solar flares?
Could be this Solar storm may amp up northern lights before Christmas | Space

See my link to mike about solar storms
‘Monday’s CME, which burst from the sun at 6:36 a.m. EST (1136 GMT), is expected to reach Earth on Thursday (Dec. 23). It stemmed from a powerful M1.9-class solar flare that erupted from a sunspot called Active Region 2908, according to Spaceweather.com’
I’m not sure how long these disruptions last and even if they could be the problem.

Solar storm may amp up northern lights before Christmas