GBIF agrees with the iSpot autofill and so do many of the links
.
KEW has a name * Myrica quercifolia L. that has been accepted by

Perhaps it more a question of “Define “Correct””.

Possibly both are correct. A paper from 2005 (Molecular phylogeny of Myricaceae: a reexamination of host–symbiont specificity - ScienceDirect) resurrects Morella, and transfers the majority of Myrica species to it.

If the paper is correct and the principle of monophyly is applied there should be one genus (Myrica) or three (Comptonia, Morella, and Myrica, or Comptonia, Myrica or Gale); POWO accepts Comptonia and Myrica, but not Morella or Gale. The Committee on Spermatophytes plumped for Myrica gale as the type of Myrica, i.e. Morella rather than Gale as the segregate.

I looked for later work addressing the question as to whether Comptonia is nested within Myrica sensu lato. There is a paywalled paper (Plastid phylogenomic analyses of Fagales reveal signatures of conflict and ancient chloroplast capture - ScienceDirect) from this summer, but the abstract suggests some ambiguity.

Thanks all - I’ve moved on - most likely things will sort themselves out (without my help) - just brought it up because there are so many inconsistencies with the ZA and SANBI lists - I guess that traditionally I would prefer to go with the Kew decision - also it’s early-days for the new iSpot dictionary.

@lavateraguy @dejayM @Chris_Valentine
Oh dear - this one is worse not easy to resolve
Anemone vesicatoria v, Knowltonia vesicatoria
I wanted to add further observations - this would have been lost - Tony and Nicky have jumped ship. 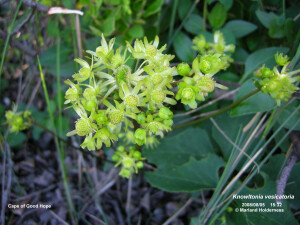 Remember how we needed to repost this one? 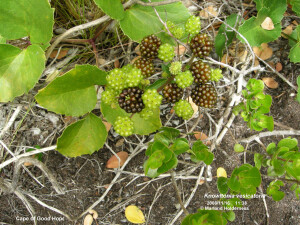 Good you are keeping an eye on this. Will need to decide on things once we get the UK dictionary update in place which hopefully is getting a lot closer.

DNA studies over the past 25+ years have found several ranunculaceous genera$, including Knowltonia, to be nested within Anemone. (Morphologically Knowltonia is distinguished from Anemone by the possession of fleshy rather than dry fruits; according to the Bothalia paper which is the basis of the classification of these species in Anemone by recent South African workers the other proposed distinguishing characteristics are all found within some species of Anemone.

More recent studies have shown (ambiguously?) the Clematis is also nested in Anemone. On the grounds that sinking Clematis in Anemone is a step too far, a 2016 paper proposes an alternative taxonomic resolution, dividing Anemone into several genera, of which an expanded Knowltonia is one. Under that the South African species would become something like Knowltonia sect. Knowltonia. A latter DNA study confirms the paraphyly of Anemone, but proposes segregating an expanded Hepatica, and leaving the other sunk genera in Knowltonia.

Having skimmed a little more literature, there seems to be adequate support for the paraphyly of Anemone with respect to Clematis, with sect. Anemoclena segregated from Anemone as the sister group to Clematis. My guess is Knowltonia will remain sunk, but how taxonomists will jump is not reliably predictable. A third, intermediate, possibility is to segregate Hepatica and Anemonastrum separately rather than together as Hepatica, but to leave the rest of Anemone s.l. in Anemone.

$ Some of these genera are obscure, but the better known Hepatica and Pulsatilla are among them.

Interesting - thanks for following up.
I’m not sure how to cope with getting these to link and whether the new dictionary will find the lost ones - probably not only mine.
Thinking - there are quite a few lichens that have similar problems.

Not really “keeping an eye” but just seem to be stumbling along blindly. Spotted these when checking the Kew site which I love.