Global filter does it work?

Went to Global and set filter for Cerambycidae to find that we have no observations of this subfamily!!!
I find this slightly amazing, as I ID’d a South African one last night.

Sorry. This is a design flaw in iSpot.

It is called the Elephant Bug.

We have raised this bug with iSpot in Sept 2014 when the site were amalgamated.

There are two aspects to it.

so: Going to your Ceramycid example:
southern Africa (using the SANBI dictionary) gives : 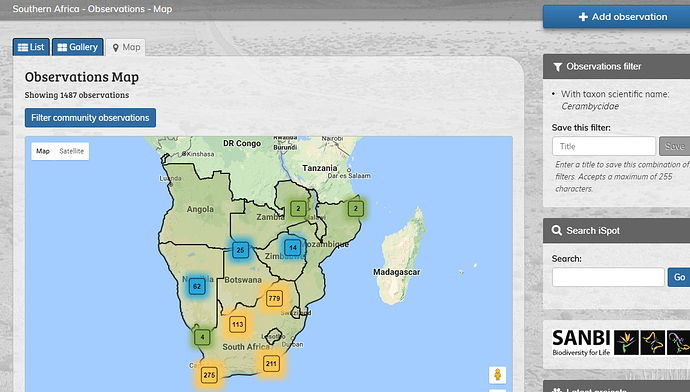 THE SOLUTION IS VERY SIMPLE - in fact there are three solutions, all suggested in Sept 2014, but ignored by iSpot - not even an explanation or apology was put onto iSpot.
So thousands of users like you are going to "global’ and expecting to see a global map and getting an elsewhere map.

Solution 2: The hardest and ideal solution. Create a single dictionary from all three dictionaries, and have the community dictionaries as subsets of these. (i.e. have a column that says what community the taxon is found in, so that communities only have to see what is in their area and not have to deal with the whole world. So UK has 1 species of Kingfisher and does not have to see all 114 species, and sAfr only sees 10 species and not 114 species. (spare a thought for the Hong Kong and Chile communities who see all 114 species).

Solution 3: The easiest real solution, but with computational overheads (i.e. will take longer and more computational power) and inconsistency issues. For the Global community create a filter that checks all the community dictionaries. At present this means, collecting data from CoL and then UKSI and then SANBI and then joining them all into a single display. In terms of computation this is easy: it is just a union of the three queries into a single result. But note if more communities come along and have their own dictionaries, this could be 5 or 10 dictionaries and this will take iSpot hours to get a result at present, unless they get better programmers)
The problem is that the dictionaries are not all the same: for instance SANBI has tribes for beetles but CoL does not recognize tribes (try classifying beetles or flies or bees without tribes: it is insane). So complicated coding will be needed to cope with Superfamily (which CoL does not have) to allow iSPot to know that Cerambicidae in CoL is a member of Cerambycoidea from the SANBI dictionary. This will have to involve finding the children in all the dictionaries before constructing the SQL query to extract the data from them: very tricky. Similarly for taxa not in some dictionaries: such as tribes - it will not be possible to extract all the data. For instance, because only SANBI has tribes, it will be possible to get the southern African genera of Cerambycini from CoL and UKSI, but genera not in southern Africa will not feature. This would probably confuse you too, if you were wanting to look at Cerambycini from Africa.

I wonder how many experts come onto iSpot and go the global community and consequently are unaware of thousands of observations in their group in the southern African community? It is a right real cockup!
This rewrite was a chance to fix it, but they have just made is worse!!
(Imagine 114 Kingfishers with 20 languages and the hundreds of synonyms: the combinatorial list for looking up an ID to make an ID will be thousands long!! what a ridiculous “solution” to displaying synonyms. And they have dumped this cockup onto us and refuse to fix it - it does not matter that hundreds of users are totally bewildered by the results: who cares what users think or feel: take the site or dump it seems to be the attitude - I wonder what firm is responsible for the messup!)

but if I used user Tony Rebelo and Cerambycidae from global I got 4 observations. Let me try again.
No: I always get 0 or blank or No results found.
But look here 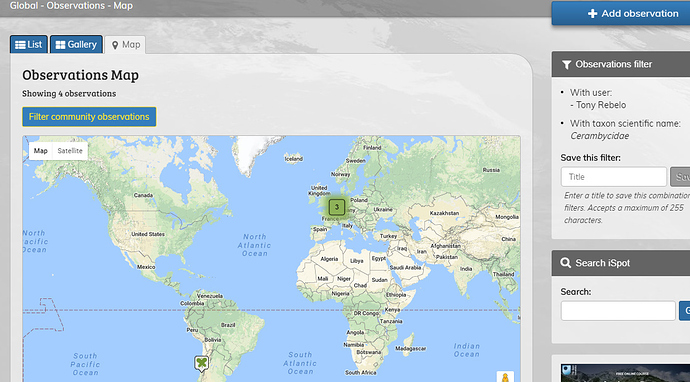 Think we need to open a Forum page indicating what does work on this program.

Sorry: I was still busy when you read the above. I am done now.

a Forum page indicating what does work on this program

I fear there is not a single page on iSpot that does not have a bug at present. With 550 outstanding bugs to fix, I am afraid that you will find that either:

We need a site that does what people expect it to do based on what is shown. When it delivers unexpected pages or incomplete (or just totally wrong) results, then it is unacceptable. The programmers dont seem to understand this.

(( it is the little things that really get me upset. The old iSpot used to say “Add an ID” when there was no ID. But the new site bludgeons us to “Add a revised identification” even when there is no identification present. The old site makes sense: this new version is written by people who dont know what they are doing. A pretty page is all that matters - that the text and results are bewildering or wrong does not seem to matter at all ))

The main problem that plague Ispot since 2014 is the incompatibility of Dictionary Names or the Elephant problem. With just 2 communities, SA and UK (the other is nonexistent) this is not very evident but it is clearly an obstacle of Ispot being utilized in other parts of the world or in science. This may be a “little thing” or just one of 500 bugs but it is a big issue for an end user. Will Ispot data data ever be uploaded on GBIF? Even Ispot people are using Inat now. Inat recently got 1 million observations in 80 days. Thats verifiable observations. That is more than Ispot in total. It is not even possible to find the Ispot totals. I do not think this Dictionary issue is something that can be solved soon or without a massive effort.

Must admit Robert that I tend to be more and more on Inat now days, if it was not for the users on Ispot, which we have got to know and respect, I doubt if I/we would even open this site on my browser.

Tony, do agree this is a mess.
Although I do not usually punt another site.
Go to Inat and search Cerambycidae & any country you want. All data arrives in a flash.
Maybe the programmers of this site should join a CS network specifically for programmers.