A few times over the years people have told me that gorse is introduced in Britain, or sometimes more specifically in Wales. They mean Ulex europaeus. Is there any truth in this? Stace and Wikipedia both say it is native. Are they maybe misinterpreting the name European Gorse? Or are there parts of the UK where it is an introduction?

A web search finds people claiming Ulex europaeus is introduced, but without substantiation; Sell & Murrell say that it is native

There’s a paywalled paper that says it was present as long ago as the Neolithic. The sample (first page) speculates about it being adventive, but there’s no firm conclusion in the bits of the paper I can see - it could be one of those native plants whose habitat has been expanded greatly by human landscape modification (and planting for hedges and fodder). Another paper says that it “originated in the Iberian peninsula and colonised Europe in the Neolithic”.

L.Rymer (1979) ‘Ethnobotany and native Distribution of Gorse (Ulex europaeus L.) in Britain’ Environmental Conservation 6.3, 211-213 may be the paper Lavateraguy is refering to. Rymer concludes that as palaeobotanical records for Ulex in the UK go back no further than the neolithic, and all are associated with human settlement, Gorse is indeed adventive. Its usefulness for fuel, fodder and fencing, in brick-making and soap manufacture meant that it had significant economic importance, but in some areas it seems not to have been introduced until the 18th century.

a 1979 paper, that is a few years ago now, might be more data on this now. Interesting Furzy Point, Pembrokeshire Lat, Long: 51.715601,-5.1326509 along with loads of English references. Gorseness on Orkney. Basically a huge number of placenames or geographical features with gorse or one of the other variants of the plants common name all over UK. Unless gorse has another meaning then difficult to believe that the plant has not been here for a very long time
https://gazetteer.org.uk/results?type=co&place=gorse&loc=geo

The Gazeteer is new to me; thanks. I typed in ‘Furze’ and got another 18 settlements & 386 ‘geographical’ features. This site will entertain me all day.

Thanks for the responses. It would be good to read the full paper but I don’t know anywhere that takes that journal. I guess a lot of plants became much commoner when the Neolithics started clearing and farming. They wouldn’t necessarily have to be introductions. I’m not sure what adventive means in this context. Isn’t it usually a species that pops up briefly in a place then disappears? That doesn’t sound like gorse.

Regarding place names, I think it was Rackham talking about one of our trees who said it is hard to decide whether lots of place names suggest the species was common, or it was so unusual that anywhere that it grew got named after it.

“Our results indicate a colonisation of gorse from its centre of origin, the Iberian peninsula, in two stages. During the first stage, the species spread naturally from Spain towards France and Great Britain, probably in the Neolithic.”

“During the second stage, mainly from the nineteenth century, gorse was deliberately introduced by humans into different regions of the world. These introductions would have been large and mainly from northern Europe.”

In a different paper (2015) Atlan et al say “Within its native range (Western Europe), it is very widespread in Great Britain, Brittany and Galicia, but it is not seen as a problem there as it is routinely and effectively managed.”

Evolution of the uses of gorse in native and invaded regions: what are the impact on its dynamics and management? Anne Atlan, Nathalie Udo, Benjamin Hornoy, Catherine Darrot.

Evolution of the uses of gorse in native and invaded regions: what are the...

The introduction and geographic expansion of invasive species, as well as their possible decline, often follow processes in which humans play a central role. This is the case for gorse (Ulex europaeus), which was intentionally introduced into more...

So I think these later papers are claiming it is native in UK, though its spread in Northern Europe was aided by its usefulness to agriculture, especially pastoral practices.

The (mainly 19th century) introductions to other countries and continents means that now it is now considered by the International Union for Conservation of Nature as one of the world’s worst invasive species (Lowe et al., 2000), causing problems in many regions in every continent.

I tried and failed to find on-line evidence for Gorse pollen in prehistoric core samples.
Surely there must be some

Pollen is not always identifiable to species, especially after it’s been lying in sediment for a few thousand years. Ulex-type pollen is also produced by Cytisus scoparius and Genista; given that that statement was made in the context of Britain, that may mean that all or much of Genisteae produces Ulex-type pollen. And with respect to the question under consideration, you would have to be able to distinguish Ulex europaeus pollen from that of Ulex gallii and Ulex minor as well as that of Cytisus and Genista. (Given that Ulex europaeus is a hexaploid, distinction by size might well be possible.)

(Google Scholar is not offering me anything obvious on the pollen history of the species in Britain.)

For the most part, placename evidence (other than river-names) only goes back as far as the Anglo-saxon period; the frequency of ‘gorse’ place-names is not a reliable indicator of its presence in prehistoric Britain. Della Hooke has a few paragraphs on gorse in her Trees in Anglo-Saxon England (2010, Boydell Press):

"OE [ie. Old English] furs, fyrs (OE gors(t) occurs mainly in literary sources and later place-names) is most common as a boundary land-mark in the south-west of Britain. Another Old English name for gorse appears to be [postulated] ceacga, possibly found in the place-name Chagford in Devon (Cagefort in 1086) … however this term may also have covered ‘broom’ and ‘brushwood’.

Hooke goes on to give other examples of the more usual furs, fyrs in Somerset, Dorset and Devon. The Cornish word for gorse is eithin, which also occurs in Cornish place-names; Welsh uses the same word and the Llandaff charters (compiled in the early 12th century AD but drawing on earlier documents, many of 8th or 9th century date) refer to an area of land Rhos yr Eithin [= ‘gorse moor’] in Penterry (Monmouthshire). Norse hvin [cognate with ‘whin’, a dialect word for gorse] occurs in some later, minor names in Yorkshire.

All these place-names with gorse elements are minor places in marginal locations, as one might expect and they become much commoner in later references.

I can’t find any references to Ulex the palaeobotanical sections of any of the archaeological reports on prehistoric sites on my shelves, either as pollen or (more likely on settlement sites) charred plant remains.

the frequency of ‘gorse’ place-names is not a reliable indicator of its presence in prehistoric Britain.

Having over 600 examples of ‘gorse’ in place names does seem a lot if it is not just an artifact of picking up something else with those letters in, even ‘oak’ only has twice as many references. Perhaps people just thought gorse a very distinctive aspect of certain places.

WikiPedia gives hvin as the origin of the first element in Whin Rigg in Cumbria as well, but the Whin in Whin Sill is generally agreed to be a best only indirectly connected. From the geographical context, I suspect that Whinside in Country Durham is a recent coinage stemming from proximity to a Whin Sill outcrop, rather than hvin saetr. (Outside Britain hvin isn’t applied to gorse, so I’d be cautious of the interpretation of early usages in place names.)

But as you say 1st and early 2nd Millenium place names don’t shed any light on whether Ulex europaeus arrived under its own steam, or was introduced at some time in the Neolithic (4000-2500 B.C.E). One does wonder how the species would have hopped the English Channel without human intervention, but ectozoochory in the form of mud on the feet of birds is a possibiliity.

My local farmer does not use the word gorse but whin WHIN | meaning in the Cambridge English Dictionary
It is so rarely managed or planted here these days.
It is amazingly luxuriant in places
https://www.orkneywine.co.uk/online-store/cask-gorse/ 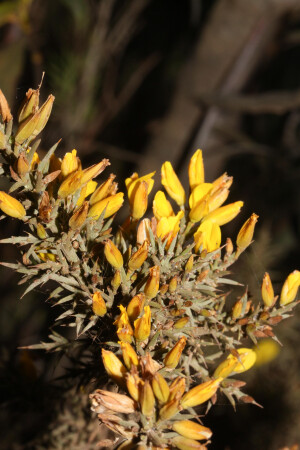 which is a different species.