A bug. Clearly the programmers have no idea of how the locality resolution on iSPot is supposed to work. We have asked for this to be fixed. But this is primarily with the Latitude and Longitude: we dont use the Grid Reference in southern Africa, so I was not aware that the problem extended to this as well.

There is also a bug with the Longitude rounding off illogically and then not being editable.
Bug #114

My understanding was that the old iSpot presented GRs as 6 figures, but stored them as 10 (or as accurate lat+lon figures, so if you zoom in on the location map you get to the right place). Has this changed? (I looked at an old observation of mine, and a new one by someone else of the same species at the same site, a few days back, and both looked OK, but I may not have zoomed in enough for problems to show.)

The point is that the number of decimal places is a record of the map accuracy. 1 decimal place = 10km, 2 = 1km, etc.
This is what the southern African community was told when we joined iSpot and we validated it. You can see the details here - https://www.ispotnature.org/iSpot101_Localities
DAMN it does not work. (the iSpot google search finds the old site pages - a real pain - it appears as if the old forum pages have not been moved over onto the new iSpot at all: we were assured that nothing would be lost, although the forum would not work, the pages would all be here. Clearly they are not.)

although the forum would not work, the pages would all be here. Clearly they are not.

Tony, could you please ask “who ever” to send you a data dump of the old “Additions/Changes to the SANBI Dictionary” forum (hope I’ve got the forum name correct). I would like to have a copy of the additions that I gave. At the time I felt that they were stored on Ispot and thus could reference at any time. Now I have no clue what I have already indicated and what still needs to be added. I have tried to find it but just get that this page does not exist.
Thanks

There does seem to be a bug with OS grid reference entry at the moment where four-figure references (perhaps the most common level of resolution I see used for biological recording) get converted into a six figure grid reference - often in the neighbouring grid square.

Ideally the system should capture the location at the resolution you have recorded at. If you really have taken the trouble to record at 10 figure (1m) accuracy (and that is a lot of trouble since conventional GPS devices and GSP in typical smart phones usually have a +/-5m uncertainty) then it is a shame to throw your efforts away.

I use 10 figure references, with the argument that the ten figure reference will (on average) be nearer to the true location than a reference rounded to 8 figures. I work on the assumption that people know that there is a 3m-10m uncertainty, depending on conditions.

I use 10 figure references,

I am confused here. I never add Grid Refs to my observations. I put the precise spot in the SatPic if I’m fussy, the map if not.
Is it because you add so many Obs in one go and have a notebook, say, with all the sighting’s GRs to 10 figs (via GPS)?
I cannot recall ever adding a Grid Ref and would always fear it might be, well, incorrect by a digit or two.
But it is true - that only Six Figs are currently shown.
See my location panel here https://www.ispotnature.org/communities/uk-and-ireland/view/observation/732499/the-easiest-seaweed - I have recorded the exact postion for posterity.
And, for interest, I have a feeling that iSpot Lat/long is not the same as Google Earth’s.

I cut and paste the GRs out of the GPS logs. (Sometimes you can get a fairly precise location via the satellite imagery (e.g. if you know which bit of which canal lock it was growing on); otherwise without a GPS even 6 figures are not always got right.)

(If I take a photograph, or if the plant is at least moderately rare, I record a waypoint on the GPS. Otherwise I only record to tetrad. I’m working on my own Android recording app, so I can get everything recorded to higher resolution without it taking up too much time.)

I just switch on tracks on my GPS, and then load the coordinates into my photo exif using Geosetter. All I have to do is make sure my camera date and time are accurate enough every few months. Takes about 10 minutes for 3000 photographs. Sometimes I have to tweak localities (such as photographs from far away), but on the whole it works well.
Except that it records the locality to almost one billion decimal places: utterly insane - cannot figure out how to keep it to 5 or 6 decimal places…
Took some taxonomists to a new species (they claimed) I saw (a pea, so I had no recollection of it at all) and the GPS point took us to the centre of the plant: total fluke - I photographed most of it from more than a metre away.

GPS point took us to the centre of the plant

Yes (and thanks @lavateraguy - which [email protected] alert us in some surprising ways))
Yes, such an important tool, proper GPS. Plotting my Locations will never be the same!
Roll on Changes and Track then

Although there are numerous bugs with location and grid refs these don’t bother me too much because ispot is not a biological recording site (whereas irecord and inaturalist are). I found the old storing of locations useful for easy entering but my locations were not necessarily accurate to six figures for repeat observations at any particular site.

That sounds useful. I’ll have to take a look.

iSpot is a bilogical recording site for southern Africa!

Tony, I don’t think most people here in the UK have grasped this, island people as we are

.
Seriously though … is Ispot all you have? Wouldn’t you rather have a platform that you are in control of? Surely you ought to have a hotline to “the Team”?
.
Here in the UK I would far rather use something formatted like Ispot, with a community of people to interact with and learn from, than our local County Records system which is now online but very, very impersonal and give no opportunity for learning or interaction.
.

Laughing a bit at this.
I don’t have all the fancy equipment that some Saffers have, but I think that I have taken some pretty good shots, particularly those taken on a crazy trip from the Cape Peninsula, turning back at the border of the Northern Cape at the Orange River Bridge.
It was at such a whirlwind pace, and often veering off the beaten track, that all I could record was the date and time as on the camera. And the location of where we spent the night.
Many of my pictures were close-ups of lichens. Imagine trying to find them five years later.

Judging by the pics we took, of special orchids at Cape Point, recording the GPS and then attempting to get back to them quite soon after, I don’t think the GPS readings we gathered would be really critical.

For me the futility of it all has been finding/photographing some really interesting stuff, especially along the Diamond Coast, but getting very little response from the SA community.

I do believe though, that anybody really interested would be able to go into the region and find the same enjoyment as we did.
I quote from a response in my Flicker album (not complete) for the Trip:
“Congratulations on your expanding inventory of superb South African lichen photos. It’s a diverse and, in many ways, unique flora that has been sadly neglected for too long. Accurate names will come. For the moment your images fulfil a very important role in showing the amazing diversity of form.” 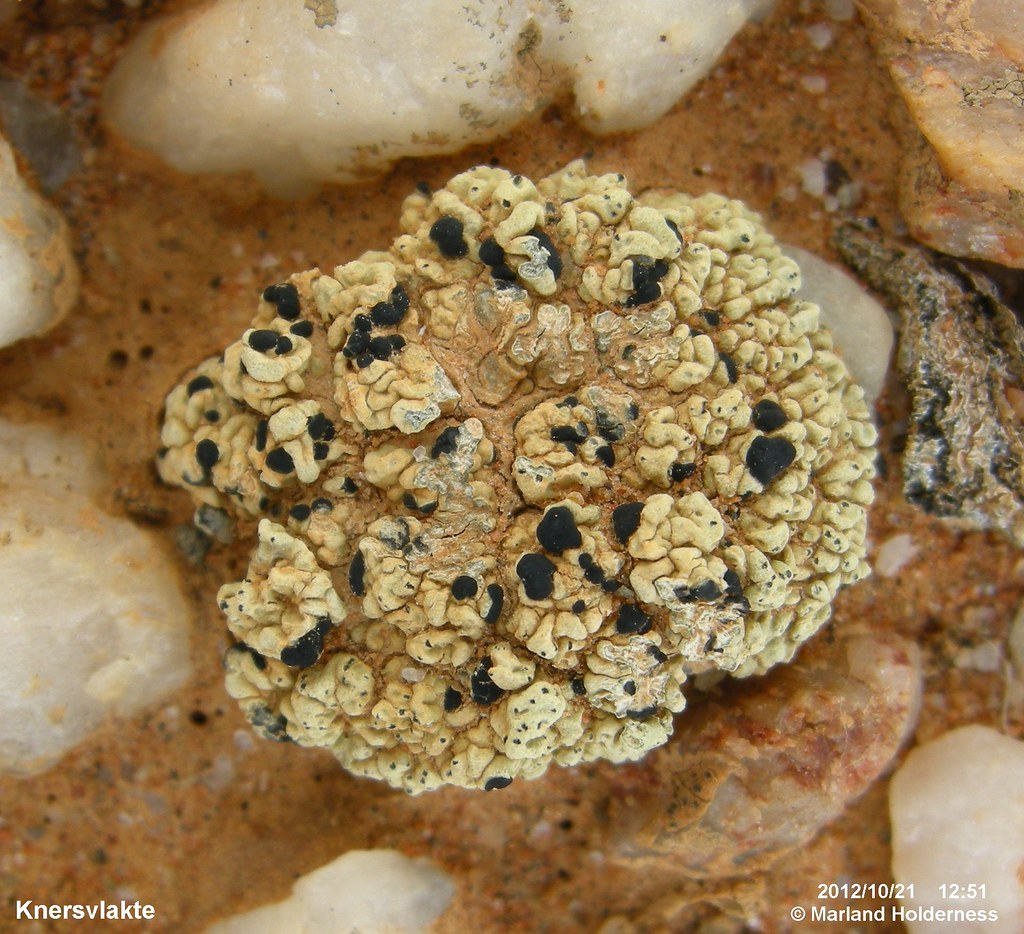 You can get by with one of the cheapest GPS devices on the market. In fact, I dont look at my GPS all day, except to check the batteries (a 2-year-old, rechargeable battery lasts about 8 hours).
.
Every evening I save my tracks (just in case: the GPS saves as well if you dont).
.
When I return from my holiday (usually 2-3 weeks, 3k-10k photos), I download my pictures (takes a few hours), download my tracks (takes a few minutes) and using the Geosetter link the two (takes 10-30 mins). There are always a few that were taken when the GPS was not on, or when the battery went flat, or I forgot the GPS, so fixing those takes a few hours. And then I am done: I dont need to worry or care about locality at all: if I want to see where I took the picture I merely look in the exif, or load them into the Map on Geosetter.

I cannot imagine any other way. It is like trying to remember a world without computers, or without internet or without mobile phones - the dark ages. How did we survive?

Never guessed when I asked my question that there would be such a response.I only asked as I have just bought a cheap GPS device as a lot of my records are in woodland and don’t show up well on map or satellite.

The GPS are getting betterrer and betterrer! Just leave them on tracks and they do an amazing job of interpolating between the gaps and open areas. Far better than you could do trying to reconstruct your path on Google Earth or any other map.
But back at home, on Geosetter (or whatever your poision: some people are fanatical about their own Georeferencing tools) you can tweak the positions of the photographs if you have the tracks or roads or routes on a map, if you need to.

That’s obviously different for you guys then and accuracy is important. In the UK in the early days some observations were extracted as records by some recording groups but now that no longer happens as irecord has taken over that function.