So that all the feedback on the new site isn’t negative.

So far I have not seen any pictures in the observations with the wrong orientation - a great improvement.

This site has unbelievable potential. There is nothing approaching it in its potential state.

I have to stop there: the rest is suicide stuff.

This site has unbelievable potential

Yes, yes, yes. The level of anger and frustration seen here, underlines the passion we all feel about iSpot; about how good it was and can be. I miss it terribly - honestly, I need it badly, I really want to know what this is and I used to post and look forward to the absolute pearls of wisdom, support, experience, expertise and friendship that still accompanies this site
Edit Picture redmoved (bytewaster)

The concept is marvellous, the potential is GREAT

I miss all those things too, I’m still posting but the level of feedback is very low at the moment - not surprisingly! Not sure how much longer I will keep bothering.

BTW I think your picture is of Acalitus longisetosus (or maybe A. rudis) on Birch.

It is and thanks. I had already agreed to A. longisetosus in the Other Obs. (you should too) as I don’t think it rudis. But thanks; you are sharp here - thanks again!
Keep bothering please!

Yes, yes, yes. The level of anger and frustration seen here, underlines the passion we all feel about iSpot; about how good it was and can be. I miss it terribly - honestly, I need it badly, I really want to know what this is and I used to post and look forward to the absolute pearls of wisdom, support, experience, expertise and friendship that still accompanies this site

So nicely put, echoes my feelings of loss! Would like to know about levels of posting and response (ID agreements/alternatives) since the change. Sorry, no help on your lovely photo, though. Am slightly encouraged by seeing more of the familiar names, people whose input I value greatly. But will some give up bothering? Hope not.

Observation images are loaded asynchronously. This means that you don’t have to keep stopping to wait for an image to finish, and therefore can add observations in less time.

If you drag and drop, the images (up to 10) all load simultaneously, and you can do the mapwork, IDs and most importantly fill in all those notes on ecology, behaviour, size and features (under Description) instead of waiting and twiddling your thumbs. Some pre-2014 functionality returned!

And you can load several different observations simultaneously as well!

Something is tarting to work… Just received an email of an identification on my OB. Looks like we are getting some communication back…

An email from iSpot. Is that not contradictory to their policy?

False alarm - directed to me by identifier

Next/Prev is new in the last day or so (yes?). Be nice to have this in Full Size mode too. Though please dump Zoom 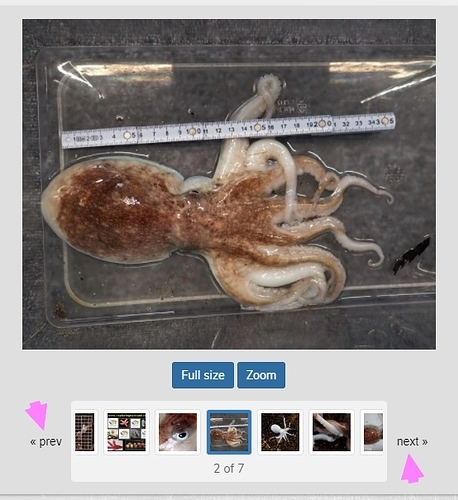 But only in observations with more than 3 pics. 3 pics does not get prev-next

I missed that then - thanks.
Another I may have missed
A hyperlink gets an increasing score when it is clicked (Forum only) - Grey number end of links.
Are you seeing what I am seeing here PROJECTS - Ideas for the Future
https://en.wikipedia.org/wiki/ISpot - and does it apply to all links? Internal and External (I can’t influence this because I placed it).
Rather cleverly it only collects one click per user - yes? (I can only increase the score once)

Next/Prev is new in the last day or so (yes?). Be nice to have this in Full Size mode too. Though please dump Zoom

I’d like gallery mode back, but a notification system and better performance and the old carousel navigation features should take preference. (Before the upgrade I could work through observations at a rate of about 1 a minute - look at the reduced pictures, enlarge one if necessary for identification, and add an agreement.)

yes, absolutely @lavateraguy - me too.

It seems to be faster (still slower, I think, than the old Southern Africa site, but I suppose it is VITAL in this day and age for a site to use modern graphics to their utmost potential) and I no longer get the feeling that I’m using a site that was designed with no thought for people outside of France and Germany and the british Isles.

I very much like that I can now throw all the pictures for an observation on upload at once. Of course, this doesn’t mean that they will all upload, because internet. Again, qualified by the “It would be nice if I could do something other than stare at the screen while they’re uploading, like the old SA site”, but it does encourage me to get up and walk while at the computer, which has to be good for my health (although it is usually to the refrigerator, so…).

You do not have to wait. You can go and fill in everything else and be ready to save the moment all your pictures are loaded. Most importantly you can add lots of notes.

But check that all the pictures are loaded (dont trust the tick that says that they are - it does not work!!!), because of you save before they are done you get a screen-freezing error an gave to start again.

Also you can (but check carefully) upload several observations at the same time. (click on Add Observation with a mouse-wheel-click or a right-click>open-in-new-tab) So if one is not finished start on the next (but remember a slow line will mean that everything will slow down), but if you have lots of notes to write, it may be a good strategy.
Remember to save those that you had not finished with.