Is there a new problem

There seems to be an increasing problem of “incomplete” identification panels of late: such that I’ve saved a standard comment to paste in.
It’s understandable that new users are caught out by iSpot’s quirks, and some species are almost impossible to enter (e.g. Box-tree Moth Cydalima perspectalis, where the dictionary has both an unusual common name and an archaic systematic). But I have noted several such posts from long-standing users, one today from a veteran with 8 years under their belt.
Is some issue with the site that is causing this? I have noted that, as I type in a name, iSpot will sometimes offer a suitable match (or several) in the drop-down, but if I don’t promptly pick one, the gremlins seem to take offence, and the list changes, offering other less well-matched species.
I also find myself indecisive as to whether to correct an invalid panel, or suggest doing so in a comment. The latter approach often fails to elicit a response - perhaps the user has lost the will to live - and if I don’t remember to check back (an increasing problem as age catches up with me), the problem remains. But leaping in and correcting without offering them a chance to do it themselves seems a bit presumptuous.

yes, it appears worse these recent months.
For newbies it is a real hurdle. Twice today I have helped users who have gybed at the choices - a plethora of confusing synonyms. There is no site-advice (I can find) about using the Drop-down menu, how to invoke it, how to avoid the obvious pitfalls and how to recognise an Invalid ID Panel.

Yes, my perception is the same. I’ve also noticed that lots of people are adding agreements to incomplete ID panels. Long term the ‘system‘ should prevent incomplete panels being generated. Until then, an explanation of the issue on the home page might help especially if it asks people to assist by adding a revised identification.

anyone noticing the occasional switch to Italics in the Display? 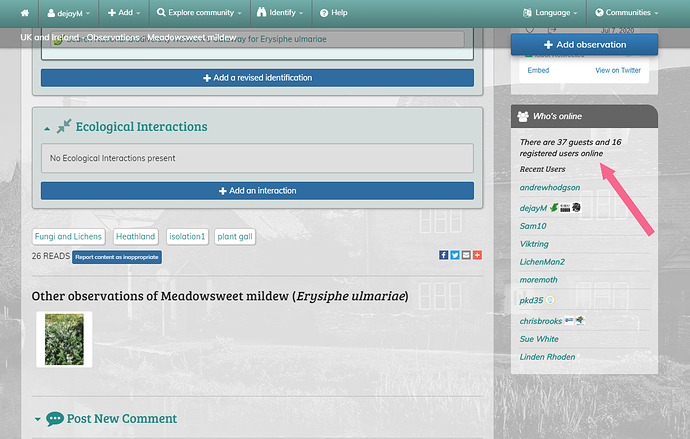 I don’t see italics for a latin name as a problem. The rules is that Latin names should be either in italics or underlined. We just haven’t had it before.

I think dejayM is referring to the italics in the Who’s online box rather than in the scientific names which (if I recall my ICZN rules correctly) should be in italics where that is possible on the system in question.

Is there a Tracker Display issue today?@miked @Chris_Valentine
Mine is hopelessly wide and makes for a LOT of yellow pages
I have reduced the Chrome screen zoom to 65% to get this grab 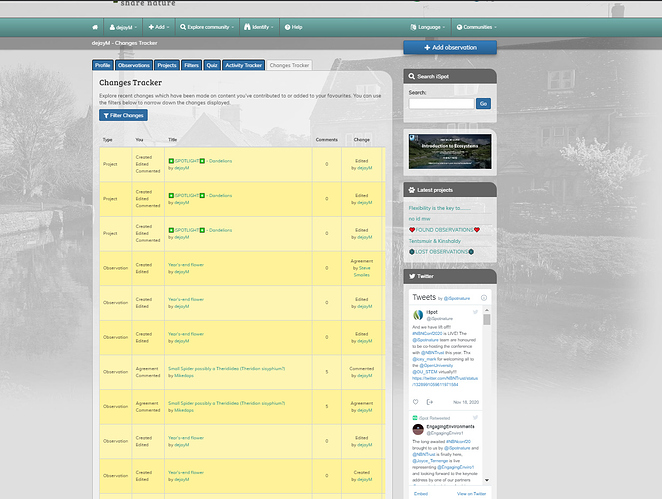 Width looks the same as mine. In fact I think the table is fixed width.

Do you mean width or page length? To me there’s too many items per page.

A fair % of the page is missing off screen rightwards. Never have I had to use the horizonal scroll bar to see the whole page. And there is now too much space allocated to the lines of text, so that fewer entries are on each page. It is not a local display issue. It was fine at 10am ish

The only think I can think of is that some piece of content has gone in that has a very long line with no spaces or punctuation that the browser is unable to wrap. We’re not doing anything to the live code at the moment - still working on new server infrastructure - save for adding the Accessibility statement link in the footer.

So. common sense suggest this is MY PC playing up. No-one has yet supported my fearr.
I will take off my boot and put it on again - reboot?

I doubt a reboot will help - maybe clear the browser cache and restart the browser. I’d be interested in seeing another screen grab if you do see any particularly long lines of text though. 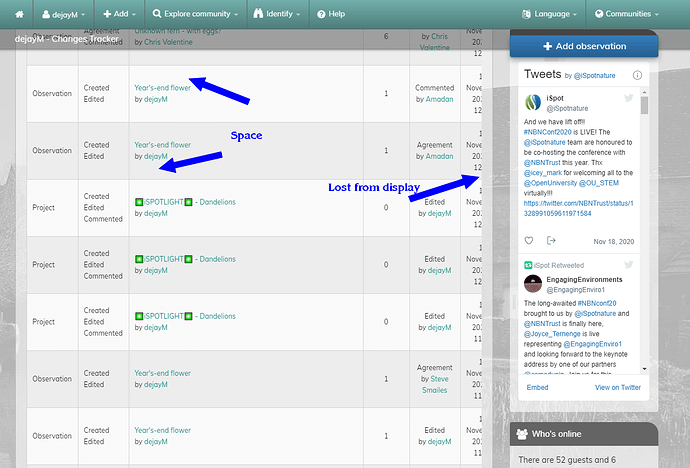 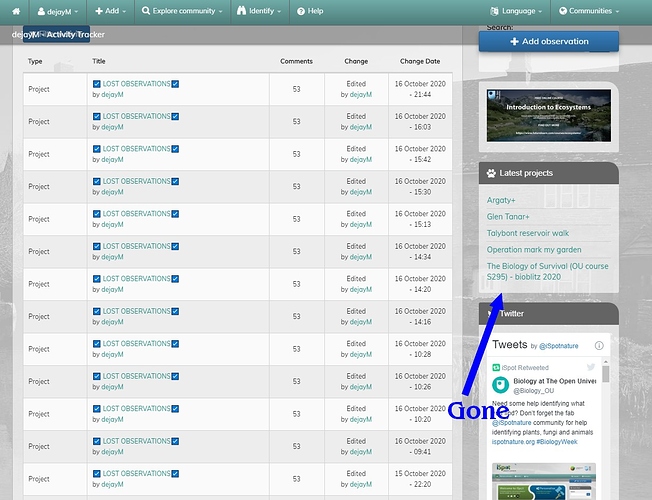 Very odd. Can’t see anything on the screen there that would make the table try to occupy more space than is allocated. The space above and below the text in each row is just vertical padding. If you go on to the next page, does it fit properly? Or does it do this on every page?

Next and Next is the same error.
But if I change the number here https://www.ispotnature.org/your-ispot/activity-changes?page=5 it clears but NOT for 1 & 2
Just checked page 100 - perfect, so is it my display? Or that bloody Google Doodle today
It’s a funny little gnome 1st and 2nd page ONLY!
https://www.ispotnature.org/your-ispot/activity-changes?page=2
.
Relax Chris, no-one else is complaining!
Here’s my activity tracker - perfect all the time! 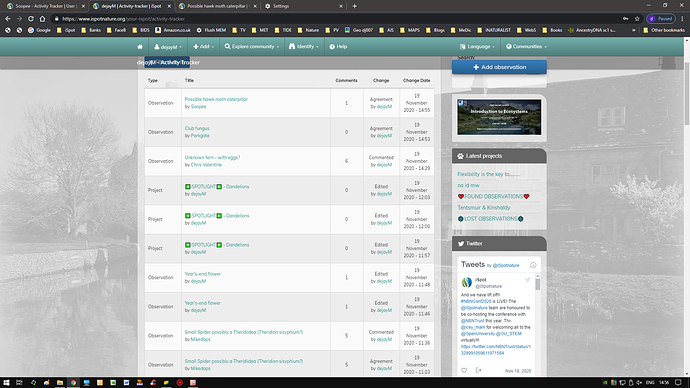 This post was flagged by the community and is temporarily hidden.

I think its SPAM above - best NOT click…@miked