I have been glancing at the habitat data recorded for each observation and about 10% of observations have no habitat recorded. Have also glanced at who has not put habitat and it seems to be everyone occasionally misses it out, I certainly have done it quite a lot and it just seems to be a mistake rather than deliberately missing it.

If anyone wants to add habitat to their observations where it is not present then I have a list of the observation numbers (i.e. the url) of each one that is missing per person. If you contact me via the inbox then I can send you your listing of missing ones.

As an example here is the beginning of the listing for me, I have fixed the first handfull but not yet done the rest: 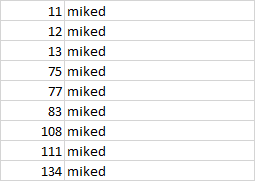 I’d be glad for a list of my errors in this respect. But not sure what you meant by “contact me via the inbox” - the form on the “contact” tab?

I think,it is still easy to progress without adding the Habitat. Another potential bug
If this is an easy task for you, then all current users should all receive a note, via a comment or email, as so FEW people will respond here.

Likewise for me too.

I’ve stopped adding Habitat (mostly here in London) because I’m not sure what to select. “Roadside” which isn’t a Park or Garden, yet not Wasteland as defined; Tidal Thames ? should this be Marine, And just recently the Docklands of Canary Wharf.

Have sent a list to Amadan as a trial run of this. To get to the actual observation using the list of numbers you just need to substitue the number at the end of an observation url e.g. here is a random observation url https://www.ispotnature.org/communities/uk-and-ireland/view/observation/784411/hoverfly so to get to the one with a missing habitat just substitute the 784411 with the number from the list that I have sent to you, in your case the first number is 95258 so the url would become https://www.ispotnature.org/communities/uk-and-ireland/view/observation/95258/ (delete the hoverfly bit)

Is that clear enough, looks a bit complicated but it is just a matter of grabbing an observation url and pasting in the numbers from the list I have sent.

If it works for you then will send out lists to others who ask.

It’s clear enough but you must retain the final forward slash. I still have over 2000 of them in the Shifting Banner Collection!
Interestingly it does not display the whole Graphic link here in the forum - just the Hyperlink (no bad thing!)
https://www.ispotnature.org/communities/uk-and-ireland/view/observation/1/ Number one, used to be No. 18 and where I added a comment about invalid ID panels all those years ago.

I’ve pasted the list into Excel, and then used the formula
=" https://www.ispotnature.org/communities/uk-and-ireland/view/observation/" & [cell address with ref number from list] & “/”
to create an automatic link to past in.
This works, but the second and third observations aren’t mine. I’m the one who added the identification to someone else’s post. Don’t think I can edit the habitats here.

Sorry about some of the observations not being yours, I had not checked that, good job I had only sent the listing to you and dejayM. Will see if it is easy to sort out just the ones where they are your observations but probably not till next week as overloaded with other stuff at moment.

My list is over 400! I was very relieved to find that most are not mine but I have added a comment to all those "Update, Needs Habitat via Edit". I suggest this would be a good thing to do, otherwise the User, if active, will not know. Projects set to Filter ‘Habitat’ will never collect these ones, until…
Additionally I am adding to my own Descriptions “EDIT - added Habitat”. As I find it quite annoying to be brought back to a post, via my changes Tracker, and not see why (I may be the only one!)
A few of mine do not exist https://www.ispotnature.org/communities/uk-and-ireland/view/observation/782821/

I often don’t add habitat because the drop-down list doesn’t contain the right one. And since when was Coastal a habitat?

Yes, looking around I think a few well- ‘established’ members do likewise. I prefer to choose the most appropriate one in the list but I think the list may need extending, though it should NOT be too much longer.
Do remember that some projects are filtered to collect Habitat.
Newbies here can (and do) easily save an Ob without entering the Habitat,
I feel that we should NOT be able to progress UNLESS we have filled Habitat seen in. IF we are uncomfortable we should add a note to either LOCATION or the Description panels (15m inside cave, say).

"There are many reasons why having a more detailed habitat classification would be better but at the same time it would also be a lot more difficult or impossible for novice users (and some not so novice users) to get the habitat right. " (Miked)
Is from here https://www.ispotnature.org/communities/uk-and-ireland/view/observation/688835/

I also don’t record habitat usually due to the options available.

I mainly record near a quarry on a hill. It is on the edge of wooded areas, has a range of foliage, some low some medium, some high, some is tended, but most not, it also has rocky areas, cliffs, and other parts are near a road and there is also a small car park.

It is somewhere between
gardens and parks
grassland,
hedgerows,
mountains and rocks,
woodland.

But none of these tags seem to fit on their own.
If I could tag multiple options, this would resolve it better perhaps.

On iRecord I am similarly stumped. They offer mixed habitats at least, but the subsection options are all coastal so I leave that part blank.

Whilst I have been guilty of missing the Habitat entry, I would never knowingly do that. I think the list is fine. We need to add notes to the Location Panel.
Habitat Coastal. Notes: deep inside a cave, well away from high water
Habitat Woodland. Notes: not actually inside the wood but on a log in the field probably dragged from the woodland years ago.
Habitat Gardens. Notes: almost certainly dropped by a gull from the Council Tip.
You’ll get m’meaning

Ok Mike, send me my errors.
I like to think I always add Habitat, which since my interests are mainly Marine and Mountain, are always options. I suppose I could have have made an error of omission… anything is possible.
Of course, I don’t post obs as often as others do, so the actual chances of errors are few.

Oops! Found a file on the computer where I’d started going througn a list of obs with missing habitats which were somehow attributed to me. Those which were my obs have now been corrected but a considerable number were observations from other posters; a few must also have been deleted.

I’ve updated the spreadsheet I was sent to show what I have / have not done but can’t remember who to send it to. Who would like it??

Interesting to come across posts from quite a few well-known iSpotters who no longer post or do so very rarely. I wonder where they have gone and how we can entice them back?

you could send it to me via the ispot inbox (at bottom of page via ‘contact us’),
Thanks MikeD