Seek (iNaturalist) sounds somewhat interesting (and is the only one that can be used in the field without internet access), but for some reason PlayStore is refusing to admit to me that it exists.

I just downloaded it to my android, so maybe it was having a problem earlier when you tried. I read the article by Hamlyn Jones and was thinking of trying it, so you prompted me to do so. I just showed it a few dandelion leaves (I happened to have a pressed plant available) and it suggested Asteraceae, which is fair enough.

No, still not finding it. I’m wondering if it’s being filtered out because my tablet uses too old a version of Android. To be on the safe side, what search string did you use?

I typed Seek into the play store & it came up immediately. My version of Android is
6.0.1

I have an even older version of Android. I think I’ll have to put the invisibility of Seek down to that.

Mine will be older than yours, it hates much of the new wave of otherwise fine Apps. Even today it said " iPlayer is no longer compatible with this version of Android" Joy…

Spoke to one of the people who runs plantnet and he said that the reason their app did not show up so well in this test was (a) because of a particular bug at the time but mainly because of the testing method. This was to show the app images on a computer screen but plantnet works much worse on these compared to actual images of the plants. It is a deliberate policy not to work well when shown images on screen as they want people to use real photos they have taken and the system is able to detect if they are images on screen. They repeated the test with the bug fixed and with real images and it did much better than the results shown in this review.

I’d recommend PictureThis - it works extremely well, much better than PlantNet or PlantSnap. I haven’t tried Seek (but I think that uses the same AI as iNaturalist which is very good)

For those wanting to try automated ID of fungi then I would be interested to know how well this one works as I suspect some of the fungi apps are not good.

A pdf article from another team on that subject can be downloaded here : http://openaccess.thecvf.com/content_WACV_2020/html/Sulc_Fungi_Recognition_A_Practical_Use_Case_WACV_2020_paper.html

I have posted Ballota nigra; my first and I think successful SEEK id. 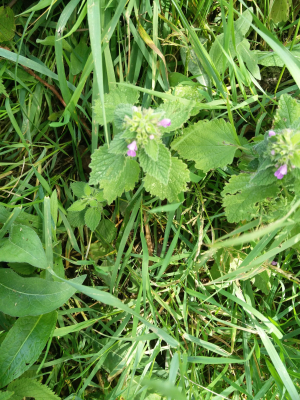 Ballota nigra: "Seek" and you shall find?

Observation - Ballota nigra: "Seek" and you shall find? - UK and Ireland. Description: This is my first field trial of SEEK* and I am impressed. I took this picture on a windy day in th

I’m not sure I want to point a smartphone at a plant to find out what it is. Is that wrong of me?

agree (strongly); where’s the fun in that? And what will be the eventual usefulness of iSpot?

I’m in two minds about these apps. I’ve tried Plant.id on two species, but I am much happier trying to work things out for myself. However, I can see their usefulness in some circumstances.
Part of the problem is that there’s no way to know if the algorithm has arrived at the correct answer. At least with iSpot and its “competitors”, the agreement system provides some indication of the reliability of the identification.
As to the effect of their proliferation on iSpot, I agree that it could be even more damaging than the disastrous re-coding that has driven many users away (and the various problems seem to be here to stay).

Where I have a real interest in the plant or animal group, I think I want to work things out for myself. Isn’t that experience where satisfaction comes from, as well as knowledge?
.
There are some taxa I find difficult to engage with - for example, grasses, or crustose lichens - and I suppose I might benefit from pointing an app at things in those cases. However, I think I would be too sceptical to trust the app’s suggested ID anyway.
.
Having said that, when there’s an app that’s proven reliable for the Chironomidae, I might be first in the queue.

Re Where’s the fun…
The author of the paper given by Lavaterguy, Hamlyn Jones, discusses his concern that the use of automatic apps might lead to many people becoming lazy and just accepting that given identification without further questioning nearby missing out on the development of the technical skills required to distinguish critical and rare species especially with the identification depends on settled for cryptic characters.
.

That’s not a new phenomenon.
.
I see it as another tool in the box. Out & about I have already used it to engage family groups in the park (covid home schooling opportunities brings them here). I see it similar to having a book, I can show them photos where the id is only to family or generic level & explain what else is needed.
.
As in all skills, learning takes practice, but having a range of tools available is usually helpful.
.

I think the challenge is that it is a bit of a black box. The app says its a such and such but doesn’t explain why (indeed as I understand how machine learning works I am not sure it could explain how in any way intelligible to a human).

Yes, during lockdown with more time on my hands, I’ve been sitting down with a cuppa and another site based in the US, to offer IDs esp on local (to me) observations to try to get me thinking, looking and learning more. I am quite surprised by IDs of species not normally found in UK when offered by new users. This has made me consider that an app/the app is being used but without truthing for location and likelihood by the user. I have tried that site’s app without uploading the image with mostly good results though it did not distinguish an image from a screen from one in the field. The most valuable observations on iSpot for me are those where description and/or ID panel give a rationale which can be viewed when looking at my own photos.

I cannot see a general forum topic on identification, so I’m adding this to a couple of specific topics for information

This page lists all the availableID resources built with the FSC Identikit that we know about. Note that many of these are 'works in progress' and listing on this page does not indicate that the resource is endorsed by the FSC in any way.

Useful thanks…
My fave after half an hour
http://www.myfg.org.uk/tombiovis/tombiovis-1.8.2/geoglossum.html ‘mousing’ over the names reveals photo.
Very impressive