Having looked at the fb cited, “An unexpected opportunity for Conservation & Community“ shows what a resilient & optimistic lot biologists in ZA are.

Rondebosch Common has an amazing history and the plants are just as resilient - so many Red Listed species.
I’ll try to find some links for you about it’s history and the British Camp. But just look at the Google map to see how the busy roads surround it.
This is the link to the Project I set up - sadly only Gaby still posts to iSpot. https://www.ispotnature.org/communities/southern-africa/view/project/754954/rondebosch-common-a-jewel-of-biodiversity

We had a departmental talk this week by Jasper Slingsby which covered fire ecology in Fynbos and similar habitats in ZA. Very interesting and more projects going forward to monitor and predict the effects of fire.

Don’t know about Jasper.
My generation have links - one Slingsby family are the neighbours of my brother’s cottage at Stofbergsfontein (West Coast National Park) a magnificent spot. I loved weekends there, photographing the flowers and lichens.
The birds are amazing - but I needed a better camera for them.
The ‘Ant’ Slingsby from iSpot published the maps that were so useful. Thinking… Thought there was a dog named Jasper that was on all the walks they mapped.

Found this pdf from Flora and Fauna magazine - tricky to read - but the history is just what I thought you’d enjoy. … and yet the flowers come up year after year. The authors Betty and Joanne were very active when I took my early pictures. We knew the one corner as Betty’s corner and Joanne’s corner was the south-western side.
http://pza.sanbi.org/sites/default/files/info_library/oasis_wildness_pdf.pdf

Following up on Jasper Slingsby.
Jayne and Duncan MacDermid from The Friends of the Cape of Good Hope produced copies of the maps that are mentioned here. http://www.saeon.ac.za/enewsletter/archives/2009/july-2009/needle-in-a-haystack
That’s what got me interested in documenting the Cape Point species. But we only found markers for a very few plots, and I think our lists were more of aliens.
Then we had a number of fires and I was able to roam (on behalf of the Friends, and thanks to Howard Langley) the burned areas recording the post-fire species. Sadly there was nobody to advise me on the value of precise locations and so my locations are sometimes rather vague - compounded by the problems of computer crashes - but hope that overall some records may be of use to show what there was shortly after those fires.

That was a lovely read; thank you. The paintings are a joy to look at. Most species I have not seen of course (a few, like gazanias, are garden plants here in UK) and Drosera cistiflora is worth a special mention; it is well posted on iSpot, including this one from R.Common.
. 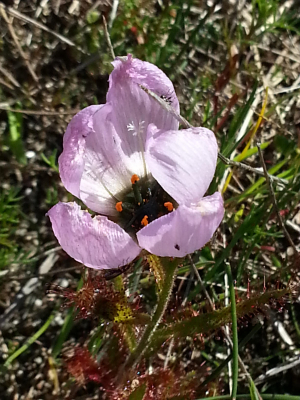 I don’t think I ever found it (Drosera cistiflora) in flower or open. It’s one of those flowers that seem to open at certain times of the day. I knew the one location, but could only get there occasionally - generally on my way home from work.

fire ecology in Fynbos and similar habitats in ZA

The PZA entry about Erica sociorum has this on Fynbos
‘Fynbos occurs where there are nutrient-poor soils, hot dry summers alternating with cool wet winters and recurrent fires. The plants have evolved strategies to cope with these factors.’
http://pza.sanbi.org/erica-sociorum
Found this when looking back at my iSpot observation and the follow up in 2014. 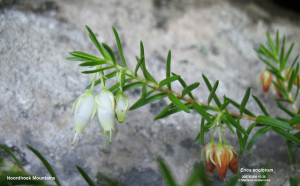 Observation - Erica sociorum, Noordhoek Peak - 2007 - Southern Africa. Description: Thanks to the Friends of Silvermine who led us to the site and lowered us, individually, by rope dow


11 February 2014
Went back today to find this very rare Erica, which we had showed Marland 7 years ago (see http://www.ispot.org.za/node/144045) but did not find it - this is an old photo. Instead found a huge mess of felled pine trees over the cliff where the Erica had been growing. Someone needs to go in there and clear things up if it is to survive.’
Then on 6 March 2014 thanks to Anri Marais 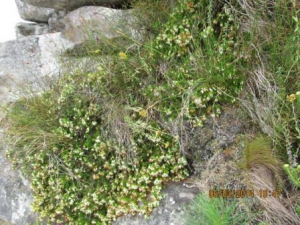 
Credit must go to iSpot for providing the platform for us to share.
I see Nick Helme was there this year Feb 6, 2021 ·wonder if this is the same plant - could we ask him to share his pics?