Apologies for starting a new thread, but I cannot find anything with a similar title.

I am trying to ‘re-identify’ one of my observations as Six-spot Burnet Zygaena filipendulae. Not only can I not post it under common name or species name alone, but the UK subspecies (stephenseni) does not appear to be in the dictionary.

We Brits are generally interested in species and do not fuss about the subspecific status of the animals and plants (and other organisms) we see, so we need the species name to be able to stand alone. Moreover, if that cannot be done (for whatever reason), we at least need the recognized UK resident (or otherwise occuring) subspecies to be available.

‘re-identify’ one of my observations

I think if you mention specific posts you ought to put a link here so we can go see the issue. On checking I can find Zygaena filipendulae subsp. stephensi - so are you right?
See https://www.ispotnature.org/communities/uk-and-ireland/view/observation/267943/six-spot-burnet-on-red-clover

Interesting, can you provide a link to item in question as Six-spot Burnet (linked to the species name Zygaena filipendulae) does seem to appear in the dictionary when I test it. Zygaena filipendulae subsp. stephensi is also there but does not have an associated venacular name (although you can manually type one in).

So I tried to add an ID, but the dropdown menu was taking forever. SO I decided to type it out manually instead, but for some reason the ID was not linked to the dictionary-even though the spelling was correct: https://www.ispotnature.org/communities/southern-africa/view/observation/735299/skink

I’m finding the drop-down menus confusing. I tried to enter an identification for another user’s post. As I started typing “Scaeva p…” I was offered 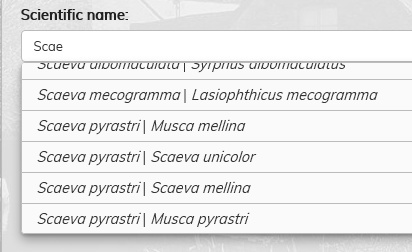 (Hope this is visible). Why these strange alternative choices, and no straight “Scaeva pyrastri”?
Oh, and why does it “kick me out” after I do make an entry, so that I have to log back in?

I’m trying to stick with it, but losing heart…

The “Musca melllina” is a synonym. There are four synonyms. This is better than the old system that give all the names in a straight list. If there is a vernacular it will also show, separately for each vernacular. It may be confusing at first.

Good response. We need to embrace features that ARE good, We need to learn how to get the best from them and ‘questions’ like @Amadan’s here should not be seen as Gripes but as useful for others’ learning…

I decided to type it out manually

This should not be a Gripe (if it was meant as one). One should always use the drop-down and resort to forcing (typing it in) ONLY when the name is not there, not because a connection is poor. Even then one should look for known Synoyms.
There are hundreds of INcorrectly typed ID panels that fail and quite a few correctly spelled ones that have also failed. The only way to be (fairly) certain is to use the Drop-down; but I have recently had a few Drop-down that have failed to invoke a full panel. In recent times I have tried again and succeeded - it a mood thing! iSpot is moody sometimes

It is meant as two Gripes.

I spelled it right, btw).

You did and I suggested nothing else. I did check yours though!.
I agree, correctly spelt or spelled names should link but how will you know that’s how it is spelled in the dictionary? Or if the names have moved on, even back? I have had a few list arguments with incorrectly spelt names IN the (UK) dictionary. Tis my opinion that we should always wait for the drop-down which, of course, is far from perfect.

This is a bit of a problem for complete novices like me, though. These may well be four synonyms for S. pyrastri, but people at my level can just about cope with the “up-to-date” name. Which of the modern/older options do we chose? Are they all older names, or are some of them “confusion” species where full speciation isn’t possible from a photo? I don’t know, I’m not a Hover-fly specialist .
So, why not the straight modern option, without a synonym?

Here is the link: https://www.ispotnature.org/communities/global/view/observation/732957/burnet-moth-east-leake-quarry

I have now added the correct species name and (manually) common name. Subspecies is not available on dropdown here – I have no idea why.

I was totally confused by the “Genus species | Genus species” dropdown format, which is (I think) new, not clearly explained in anything I read till this post, and simply confusing – IMO first item in dropdown should be to the correct species name (which most people will be using) without synonym.

Subspecies is not available

I assume this (the observations you link) is for Zygaena filipendulae subsp. stephensi - the name you would prefer?
You should notice that the post has become Global and now uses the CoL dictionary.
This of course is a BUG, as they regularly say here. The CoL dictionary does not like the Six-spot Burnet nor Zygaena filipendulae subsp. stephensi but annoyingly has the Genera. The UKSI loves all THREE!
When I checked (was it only this morning) the post was obviously still a UK one because I tested Z filipendulae subsp. stephensi in your specific Drop-down, so something has happened. If you don’t understand much of that, don’t worry because few do! And the fault is Programming (would you beleive?) - I don’t think the programming is working very well at the moment - I may be wrong.

dropdown format, which is (I think) new,

And yes, the drop down is newly designed to include the Accepted name first then the known synonyms (though not all). And is cluttered and confusing because some include the accepted (to some) common name, but not all.
One must choose the accepted Scientific name so you have to research first.

It is my experience that iSpot ignores Common names https://www.ispotnature.org/communities/uk-and-ireland/view/observation/735543/love-trees , so, in theory you can add anything you like (there is plenty of evidence for that in iSpot)

I suspect like most things people will work it out after a few goes though,

In one of the SA species I found 70 + names! It is in the order of the synonym and the vernacular associated including spelling variation for the synonym. However, anyone of these provides a correct entry.

There are bad mistakes. Thus you should select carefully!

Can you link that please?

You dont need to use any vernacular (common) names. That is your choice.

We have logged this particular format of showing species names as confusing and ridiculous but are awaiting a response from the programmers.

A temporary workaround until this is fixed is to select any of the names that has the scientific name that you want, and then delete the common name. But you must click (select) the name for it to link to the dictionary.

You seem to have to click from the menu for it to link.

We have pointed out that this is very confusing and that normal users cannot be expected to know this. In fact, this is rather ridiculous.

This is a ridiculous solution for the programmers to a problem that they had, and the solved it by making this horrible format that confuses everyone -= even those of us that know the synonyms backwards.
Thank heavens that this species does not have five common names - under this new system, each one of those names would then be repeated five times - once each for the common names. A most unwieldy system dreamt up by someone who does not care about the poor users, and who obviously did not try it out for themselves. Also, if there are more than 20 matches it does not bother showing the others, so that this is only a small set of all the matches (this was fixed)

I disagree. It has two bugs.

The old iSpot was far better for getting matches and displaying the data. Its fault was that it did not tell you which matches were current and which were synonyms. And you were expected to press the Get recommended to find out.

The new system finds matches that it should not, and displays them in a baffling way, and multiplies one’s matches out of control for each combination of synonym and common name.

Lastly, you are not quite correct. The old iSpot would only have found 3 names, not 5 (that the above list does not show Scaeva pyrastri on its own, but only as linked to synonyms is a BUG!!!).
And pray tell me: you are a taxonomist. Which of the four names shown for Scaeva pyrastri should you choose? You have to make a choice if you want to post this! (the answer of course is that it is irrelevant, just like the names shown - which therefore should not be shown!)