We are always interested in specific examples of this kind of thing. We are aware the algorithm does need modifying (and has been modified a couple of times in the past) but as dejay mentions it has to be done very carefully with a lot of testing to avoid loads of unforseen issues.

What would stop a reputation 42 times greater than the author from taking the “likely ID” ? It’s not a moan, just interested.

Another question, where do “Expert” and “Knowledgeable” badge holders sit in the reputation system. A knowledgeable badge (in my opinion) should not outweigh a 5 icon user who has built up their reputation by hard work (perhaps it doesn’t). This brings up the old chestnut of being “Knowledgeable” or “Expert” in a very small field but holding sway over the whole genre. This has been discussed before but are there points levels that can be published here so we can see them?

Perhaps the system could be drastically simplified. iSpot has morphed from a site for identifying wildlife into a sharing wildlife site over the last few years based on uploading your own observations which has the effect of accumulating reputation points. The site is based around reputation points so why not just use these as an accumulative reputation scale. In that way hard work, good photography can be rewarded. Why complicate things to the point of the absurd. I hasten to add this is just my opinion.

iNat is terribly flawed by the absence of a Reputation system. Without it, or something like it, here thousands of observations would have the wrong ID but with the Likely Banner.
Actually there are already thousands of those that would benefit GREATLY from visits of high iconned users

Expert is given 1000 points and knowledgeable 500 points so they can still be overturned by someone who has built up reputation to more than these levels. Some experts have refused these badges and prefer just to accumulate reputation like everyone else however these points allocations (expert and knowledgeable) were essential for starting off the whole system and they can also show where people with allocated reputation have interacted with observations.

I think it might be extremely useful to have some examples of the way the Algorithm is working (or not). Note these are different GROUPS
This one is fine, it now depends, like the example above @chrisbrooks , on an agreement. Quite correct in my opinion.
It will have shifted by now so brisk screen prints are needed - https://www.ispotnature.org/communities/uk-and-ireland/view/observation/846178/ 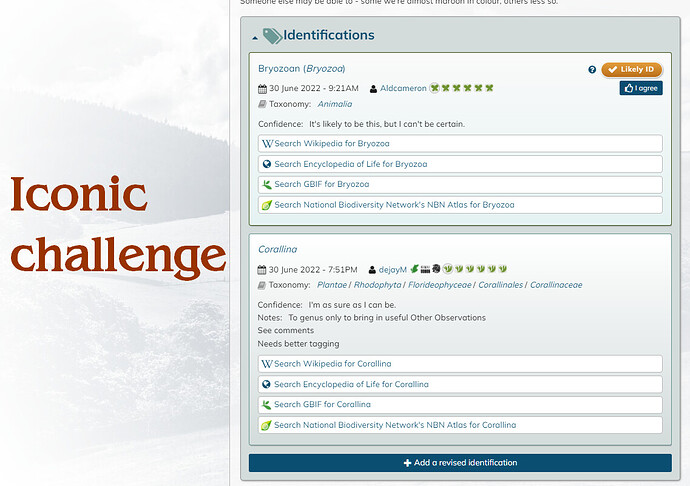