The Queen’s Green Canopy (QGC) is a unique tree planting initiative created to mark Her Majesty’s Platinum Jubilee in 2022 which invites people from across the United Kingdom to “Plant a Tree for the Jubilee” . 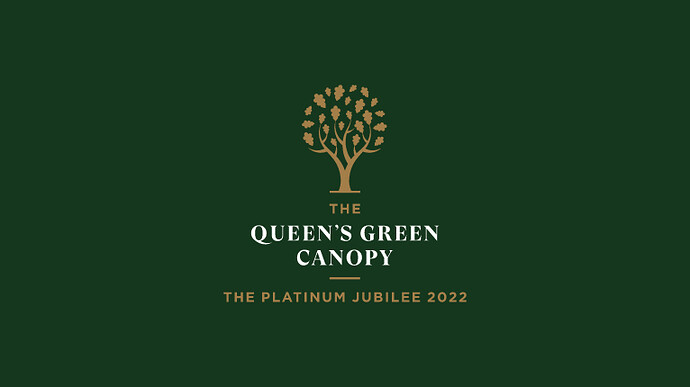 The Queen’s Green Canopy (QGC) is a unique tree planting initiative created to mark Her Majesty’s Platinum Jubilee in 2022.

Although its not exactly the right time of year to be planting trees, I’m going to see if I can get another silver birch to add to my garden. There was (at least one) previous scheme - Plant a Tree '73 - that I took part in (although at the time I would have been small enough to disappear into the hole we dug for the root ball!) which aimed to restore the loss of British trees due to Dutch Elm Disease.

I wonder which of her relatives has a tree nursery. Don’t you get sick of tree planting being relentlessly pushed as an environmental improvement? If only trees could develop some form of natural regeneration that didn’t involve spades, stakes, plastic tubes and grinning celebs.

If only trees could…

I planted, using a spade, 100 last week, have to do 100 this coming week. Unheralded. I will never see the result, if there is one.

Yes: much as I love them, there is too great a focus on planting them everywhere. Various past editions of British Wildlife have mentioned various tree-plantings - often by recognised, “respected” organisations - in entirely unsuitable (or already of value for other organisms) sites. It devalues the sterling work of people, like our Orcadian friend, who are doing it right.
I feel a rant coming on about the choice of planted species, too - so I’ll shut up now.