Which cranesbills have you seen?

can’t seem to adjust the size of images. List of cranesbills based on some of the most frequently spotted on ispot but with garden varieties mainly left out.

Looks good but uses a lot of space. So where are how do you see these Polls being used. Pencilled G.versicolour grows in my Orkney Garden

So far it was mainly proving it could be done but might see if there is a way to use it with students as the next lot are starting at the moment.

[Add Geranium phaeum and Geranium x magnificum to the list of species seen. I think I’ve seen Geranium columbinum once, many, many years ago. I’m not sure about Geranium sylvaticum. I haven’t seen Geranium purpureum (not offered). One of the giant herb roberts is naturalised in the gardens of a local stately home.]

The images make the results rather difficult to read - perhaps they would have been better placed outside the poll (at the top of the message.

I could have added more taxa, there are more that have been spotted on ispot, but wanted to keep the list ‘manageable’ (and I got fed up with all the fiddling around with the code). Although with the images in there it is not idea to say the least. Anyone can add extra species they have seen in the comments as you have done, just as a note.

If the images were separate then it might not be so much of an issue to have a longer list and as you say it would make the results much easier to see.
Not sure if it allows this though as each image would have to have its name otherwise it would not be clear which is which.

I forgot that one - I have it recorded from a couple of sites. 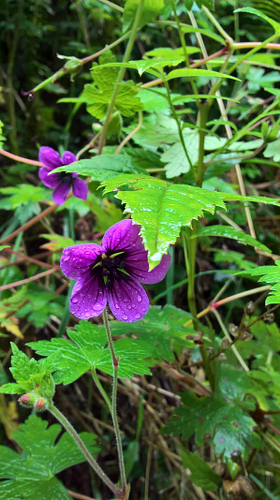 Observation - Geranium - UK and Ireland. Description: a definite escape... Stace 3 has G psilostemon and not G procurrens - but Stace also suggests that p

can you have a look at this? I wonder this might be the hybrid…

Which reminds me - I saw a white-flowered cranesbill (not G. molle or G.pyrenaicum) on the bank of a canal cutting once - I have it down as Geranium clarkei, but I’m not all that certain of the ID. I never managed to relocate the plant.