As Mr HubNut would say when test-driving a car in shorts: “knees alert!”.
I haven’t dared post this as an observation, in case some users suffered PTSD. But I’m interested as to what bit/stung me.
It happened last week, probably at a grassland site (Upwood Meadows) on a dull, chilly day. As usual, I wandered into long grass, and by hedgerows.
The next day, I found a hard lump very like a horse-fly bite - no other visible signs. But within 24 hours it had swollen massively and become badly inflamed.
This is 8 days later, and it’s clear there are 4 separate wounds.
Any ideas? 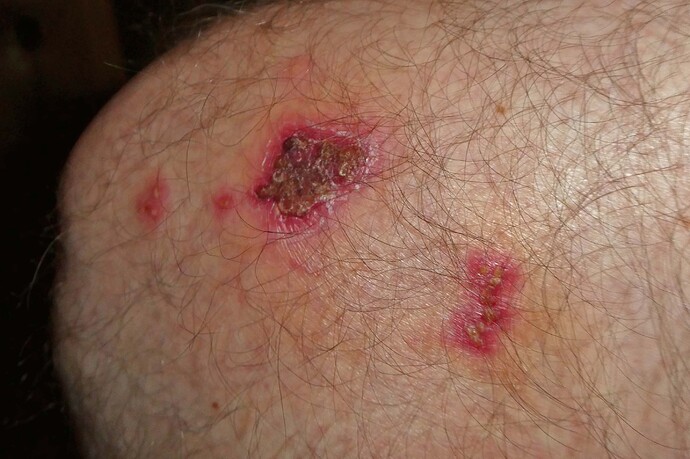 Formic acid - maybe ants?
When trapped by clothing can be pretty aggressive
Some ‘nice’ reading here Bites and Stings: Pictures, Causes, and Symptoms

I guess we’ll never know.
Many years ago, in anticipation of cattle grazing, I spent a hot late summer day in Wilden Marsh (Worcestershire), doing some fencing repairs. She Who Must… was impressed with my white t-shirt. Horsefly bites had drawn small drops of blood, and then my sweat had acted as the mobile phase for some thin-layer chromatography. The salt had also “fixed” the stains into perfect little faint red-brown roundels that resisted the washing detergent easily.

Any chance of hogweed even if not the giant variety, might have been exposed to sun later.

I don’t think so - I have seen the blisters formed by Wild Parsnip, but this was not similar. Coincidentally, I was working around Giant Hogweed a couple of days later, but the damage was already advanced by then.

It looks as if the wounds have become infected. I’ve had similar, but nothing like so large, with mossie bites.

I agree with surreybirder that the wounds have become infected (and possibly scratched?)
I think identifying the culprit will be well-nigh impossible given the range of reactions that different people can exhibit to the same stimulus. If you think the original reaction was the way you react to horseflies then that is a pretty likely candidate; the infection would, I think, need a microbiology lab for identification.
Hopefully it will all clear up without lasting effects.

All in all, I think infected Horsefly bites is the most likely explanation, although unprovable. The fact that I felt naught at the time would chime with that, and there were cattle grazing nearby.

When I’m bitten by a horsefly/cleg I feel the bite at the time. Mosquitoes and midges I might overlook until the allergic reaction kicks in.

For me, it depends on where they bite. Back and legs I tend not to notice. (My mother would have said, “where there’s no sense, there’s no feeling”.)

I don’t think so - I have seen the blisters formed by Wild Parsnip, but this was not similar. Coincidentally, I was working around Giant Hogweed a couple of days later, but the damage was already advanced by then.

I don’t know how frequently any of them actually cause the blistering. We often encounter native species when doing volunteer work, and we’ve never had an instance. Maybe the sunlight is the key, or perhaps the season. The only case I saw was from Wild Parsnip, on someone who’d tripped on rough ground, and grabbed hold of one as they fell.

I think it also depends how preoccupied you are at the time. I’ve sometimes felt a mosquito land on me - and must admit that ‘conservation of biodiversity’ is not the thing uppermost on my mind at that moment.