I added an observation of a small moth, Elachista species, using only the genus name (it needs dissection to get the species). iSpot put “Plants” into the group box and would not let me change it to invertebrates! Problem with your database? (If I added a species name it changed to invertebrates.)

Observation - Micromoth. - UK and Ireland. Description: A tiny moth that came to my garden light trap. iSpot insists that this is a plant and won't let me

you’re not alone, it’s a known bug (one of 500+) that has been annoying people for sometime. If the forum pages were easier to navigate I could direct you to other complainants

A known annoyance. I have found that identifying it as a bird, say Sparrow, then coming back to Elachista MIGHT do it. Worth a try…Anything to keep our interest up.
EDIT PS but for the real solution see below!

just looked at your post. This is a dictionary problem rather than the new system bug here.

Elachista is the name given to both a moth genus and a plant genus, this happens occasionally and the current dictionary has no way to distinguish between the two. I’ve come across instances where the dictionary has been edited to list genus (A) and genus § as separate taxa and hence fix the problem. Here in southern Africa we used to have a dedicated dictionary update forum but how these things will be tackled in future I don’t know, perhaps @dejayM can shed light

I can - look
https://www.ispotnature.org/communities/uk-and-ireland/view/observation/743394/not-a-bird and
https://www.ispotnature.org/communities/global/view/observation/716392/leaves there is no simple solution but if the name appears twice in the drop-down, choose one (remember which one) if it’s wrong then make a new ID with the other. Well done @Tuli I think it’s rather fun. FUN do you hear? 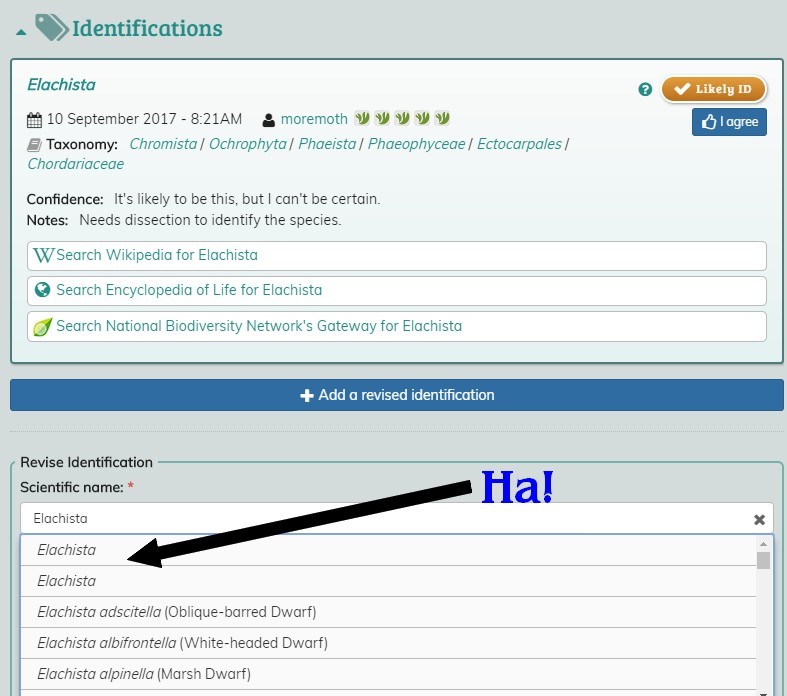 It’s not a complaint! I only have one COMPLAINT here and that is the absence of “changes”. Anything else is just a glitch. (And fun!)
So, intelligent use of the drop-downs would have got round this particular bit of fun … thanks!

Yes, I can’t find the link but YOU have a missing picture in a post, I left a message, see if you can find it. I’ll try too.

That would be my fault. I posted the wrong photo, deleted it, couldn’t find the right one, forgot about it. 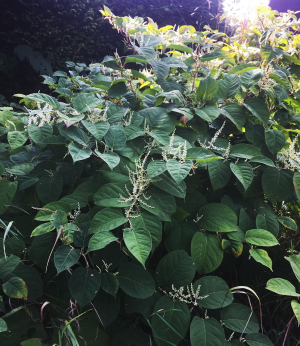 Observation - Russian Vine. - UK and Ireland. Description: Overgrowing a shrub at the roadside.


I posted a pic of Japanese Knotweed by mistake, correctly IDd by Peachysteve. I would have deleted the whole thing and re-done it later if I could delete an obs. … I do have the right photo now! Anyway, that one is not a bug except that I could not delete the whole thing, which is probably a “feature”. And fun, of course!
dejayM 10 September 2017 09:59 #9

I think the post should stay BUT the result is inconclusive. Anyone finding it in the future might be quite confused. Perhaps you can add a pic (in Peachysteve’s favour?) and put up an explanation in the Description Panel. It’s hardly ‘important’ though in these the Bad Days!

Yes, fair enough. I have reinstated my wrong photo and now I have put up an obs with a photo of the specimen I thought I had before … still couldn’t find the old photo though. This is a new one. 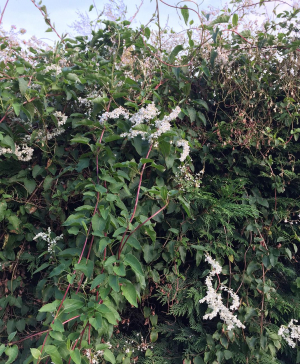 Observation - Russian Vine. - UK and Ireland. Description: This is an obs. with a photo of a specimen I thought I had posted earlier, but was a Japanese Knotwe

I think it’s rather fun

This is the wrong sort of fun!!!

This is simply a poorly designed dictionary! At the very least the two names should explain which is which (e.g. Elachista (plant) vs Elachista (animal).)
That iSpot cannot deal with this intelligently is another issue.

As a matter of interest did you click on both - does iSpot link them intelligently, or does it link them both the same?

Yes iSpot is very intelligent. If you look at https://www.ispotnature.org/communities/uk-and-ireland/view/observation/743394/not-a-bird you will see I deliberately provoked the Dictionary.
I KNEW which was which because I tested it. IDing as Prunella1 got my Icons right and the ID - it would be hit or miss for a lesser mortal.
But yes, this is a dictionary issue, the drop-down should look like this 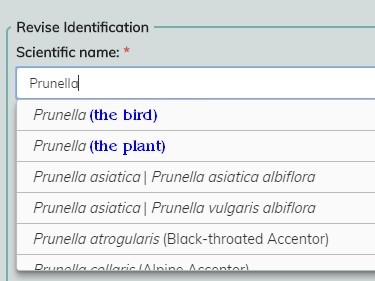