How accurately do you give the location of the observation

You may want to discuss this on the forum and/or send thoughts on this to the iSpot inbox (address shown on the bottom of most iSpot pages).

Having the right location and resolution of 10km or better is vital for most biological recording.

If you don’t know what accuracy you are giving your observations at that would also be useful to know.

It can be tricky to work out the resolution of your observations if you are using the map to mark where you made the observation. Ideally you would be as zoomed in as possible so you can see the particular tree or detail of part of the park you are making the observation in, this may be 10m resolution. If you don’t zoom in this far it can be more tricky to estimate resolution.

Those people using gps or taking photo on phone with the gps on the phone putting in the location automatically may also achieve 10m but be careful as sometimes the location can be wrong. For example if the gps looses the satellites for a short time it may put the location as far away from the true point.

No, (a) is about accuracy, (b) is precision. They are completely independent aspects of the location.

One should always be accurate. You may want to reduce precision to make it harder for someone else to find the organism.

Assuming I am not trying to obscure the location, I put the place marker in precisely the right place as far as the aerial photos and my memory allow, but iSpot reduces it to 100 metres in the grid ref, e.g. SH597675. Is there a way of getting the iSpot grid ref to record at 10 metre precision?

Some of my Observations are to 10cms. They won’t all be accurate but a few are.
I had access to military-grade satellite phots for some in here
See my two Projects - in some cases I have added a 12 Fig Reference to the Location panel (John).
https://www.ispotnature.org/communities/uk-and-ireland/view/project/746155/
https://www.ispotnature.org/communities/uk-and-ireland/view/project/769578/ 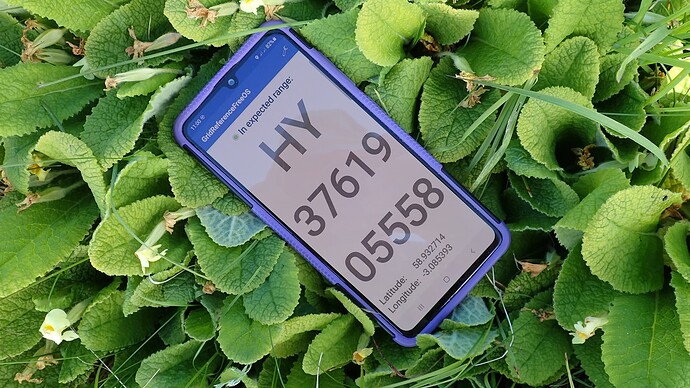 I normally use the map with the satellite on and can confidently get the pin within 5m. At the allotment I put the pin on the vehicle track roughly level with my plot.

Having mulled it over, there are other situations where I would use a less precise grid reference. If a noteworthy bird flies over and heads off into the distance, I would only give it a 100 metre grid ref or even a 1 km grid ref. It isn’t interacting with anything on the ground so the record doesn’t meaningfully belong to the site. It is just a record that the species is in the area. In such a situation I don’t think a 10 m grid ref is appropriate. It would be different if the bird was hunting over a field. Then a 100 m grid ref would be useful to show where the hunting habitat is, backed up with the name of the field since it is quite likely the hectare indicated by the grid ref would overlap more than one field.

If I recorded several individuals of the same species in a field, I would probably lump them under one 100 m grid ref rather than give each one its own 10 m grid ref.

For something mobile like a bird that is not doing something else I would put the pin in the camera position.

You might consider promoting the use of the Location Panel to MUCH greater effect.
I know that precise location is important for Biological Recording but so is immediate habitat and local environment
I have added a supporting comment in here Porifera | Observation | UK and Ireland | iSpot Nature 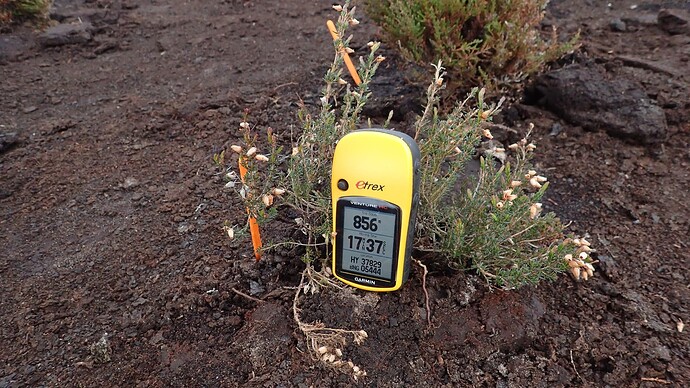 Is there a way of getting the iSpot grid ref to record at 10 metre precision?

you can enter a 12 figure OS reference John. It is accepted as the location but displays only as 6 fig. It is VERY accurate - 10 figure ref of a caterpillar. 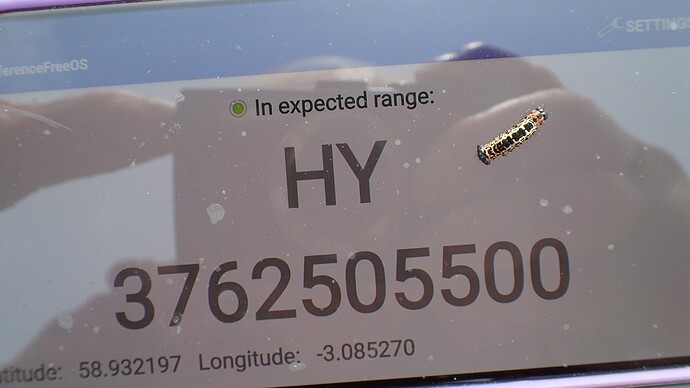 I record to a precision of 1m, but the accuracy is nearer to 10m. (The nominal accuracy of the GPS varies from 1-3m, but the difference between successive observations of the same plant is often larger; and there the additional source of error that the location is where I’m standing, not where the plant is, which adds an additional error of 0m upwards.)

Here’s how you might do it @John_Bratton https://www.ispotnature.org/communities/uk-and-ireland/view/observation/793173/
The figures are NOT retained in the Panel unless you add them as a note. The location is actually very precise in the Satellite view. But sometimes the Sat view is not very clear. Most of Gwynedd and Anglesey seems to be well ‘satellited’, not so Orkney
You can see individual rocks in this https://www.ispotnature.org/communities/uk-and-ireland/view/observation/841293/
This is beside the Evan’s Gaz delivery truck in Streetview https://www.ispotnature.org/communities/uk-and-ireland/view/observation/296958/ Sometimes Streetview shows the exact position of the item, like trees for example, which obviously need to be very near a road
For special records you might photograph the GPS reading, so as to remember
I am relocating ant’s nests under stones using GPS on phone - I had not been to this one for two years! 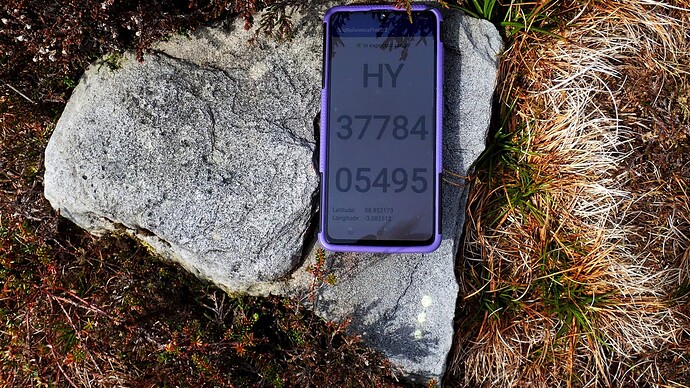 I record to a precision of 1m,

Yes, I agree, a bit hit-and-miss but we must use common sense and nav/terrain skill. Maybe photo the the precise location, so as to precisely return (see photo and note the faded paint markers)

Remember that the ‘satellite’ (actually aerial photos) are only useful if they are very accurately geolocated themselves. In testing I did a few years ago this was somewhat variable across UK, some were within 1-3m but others were 10m (or considerably more) out. I also suspect that the geolocation of the images will change over time so probably best not to rely on anything better than 10m from the ones that are freely available.

yes, I agree. I have encountered difficulties. And, in fact, they may be over relied upon.
It might be better to use over-printed large scale OS Maps which has been surveyed properly.
The Location link in Observations could go to https://gridreferencefinder.com/ and ten fig Grid refs. for free.
an old survey. 1 Grid square with 100mx100m sub-squares 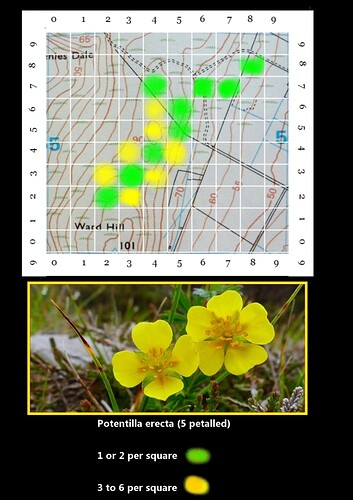 Also, grid ref finders don’t agree between themselves. I have used wheresthepath for years simply because it was the first one I was told about. But if you compare it with the North Wales LRC grid ref finder, there is about a road width difference. Then there is iRecord. I haven’t used it much so don’t know how it compares.

Yes - a huge difference this eve between iSpot (Google) Satellite positioning and the Gridreference finder. I will try to illustrate that in an Observation.
I often find it VERY difficult to translate my ‘accurate’ GPS readings to the iSpot Locations Map. We need @miked to tell us what is the best method!

I have a healthy disrespect for the accuracy claims of most location-finding systems. On land they have frequently shown me to be many metres from where fixed features show me to be; on the water I’m warned of imminent grounding when eyeball mark 1 clearly denies this possibility. For most purposes, knowing that an organism has been seen in a pretty widely-defined area is all that’s needed. Many of the animals we record are mobile so recording to the nearest metre is rather meaningless. Through their reproductive mechanisms even plants and fungi can be regarded as mobile in some sense and it’s unusual to find isolated specimens so, again, I doubt the need or wisdom of recording to the nearest metre. I’d suggest that in most cases recording to the nearest 100m (ie a 6-figure grid reference) is appropriate in terms of both accuracy and need.
That said, I accept that there may be occasions where I want to be able to re-visit a particular specimen and then I might consider trying to record to 10m (ie an 8-figure grid reference) along with a note of local features. I’d probably still report it as a 6-figure reference.

On the vagaries of GPS, yesterday I was recording the location of a group of hybrid bluebells, and it gave the nortthing as 60000. A bit later I passed them again (square bashing tends to involve retracing footsteps) and the northing was 59985 (15 m difference), so I went a 20 or so meteres further north, and then went back, and the northing was 59989.

Elsewhere there’s a Ribes uva-crispa, which I pass fairly regularly, so I’ve made quite a few records of it over the years, and the GRs form two clusters about 10m apart. I have the same problem with a colony of Viola odorata var. subcarnea (with in this case the problem that the locations straddle a tetrad boundary). It seems that the GR depends on which direction you approach from; I’m wondering whether scatter from trees is causing errors in the calculated position.

I am not surprised by the differences you have there. I did a lot of testing of GPS and the the GPS in phones either from short term readings like you might make or leaving them for hours. There are all sorts of errors which vary over time of day and day to day depending on the satellite configuration, weather conditions and various other factors.
In the open outside woodland and away from buildings phone and hand held consumer grade gps should get 10m or better location if you are careful. But can’t say how much better as that depends on many factors as mentioned above - might get 3-5m accuracy or might not. In woodland accuracy likely to be significantly worse than this and may not get a fix at all, usually best to check as occasionally machine puts location in completely the wrong place.