I tried a quiz. They tell me that the first image was marsh clubmoss rather than my guess of stagshorn clubmoss. So far, so good.

But the quiz kept showing me the same image. And when I stuck in an answer of marsh clubmoss it told me that it was stagshorn clubmoss.

(And I note in passing that the 15 character minimum on topic titles doesn’t count spaces.)

I have had the same experience - almost all the plants on here are clubmosses and like you I am not convinced it is giving the correct ID. Thought I would wait a while before complaining as its a way down on the list of urgent things needing sorting out.

as its a way down on the list of urgent things needing sorting out.

With this attitude we will never get a decent site!!! ALL BUGS MUST BE FIXED. And user requests and wishes should also be given attention.

I’m not sure the quizzes have ever really worked, in part because sourcing the identification from entries on iSpot is always going to pose a risk. They were an interesting idea and a good experiment but the sensible thing might well be that iSpot simply deletes these.

s going to pose a risk.

What do you mean by risk???

not sure the quizzes have ever really worked

Of course they have worked!!! What does this statement mean?

There are always going to be issues! In my opinion the Quizzes are too simplistic. The way I would like to have seen them:

At present the Quiz is just a meaningless game. But with a very little thought it could become:

Quiz (at least for plants) still isn’t working…Currently on Plants level 5, we have wild pear fruit to begin - fair enough and fairly straightforward, Same image comes up on the second question, but the answer is no longer wild pear but twinflower (a less twinflower-like image is hard to imagine). Not urgent, but does need fixing.

It does seem to me that they should be withdrawn until those with 5 Icon and above reputations, are happy. At the moment, it seems appalling.
Tony’s summary of suggestions above is (was) worrying - who here would want to be a level 13 Master? Perhaps he would have liked Celebrity levels too. And no-one has mentioned a league - yet.
iSpot Quizzes should be simple and encouraging to beginners. Anyone beyond beginner stage ought to be able to find their own testing entertainment. Aren’t Miked’s Projects testing enough?

I think withdraw or ‘hide’ quizzes until they work, definitely … if nothing else would be good to have them functioning at beginner level.
Mike D’s projects are certainly testing. I have got as far as I can with northern Europe and now have to dust off ‘Mediterranean Plants’!

Dont worry. I will take my suggestions to iNat. They listen. They reply. They DO SOMETHING.
And they have promised us an xmas present: cannot wait to see what it is …

Good luck and a merry xmas and happy to new year to all our old friends on iSpot. Am missing you all. Sorry I could not take you all with me! Best wishes for 2018!

Need lots of examples of what is not working as the quizzes should be fully fixed now. I mentioned they should be working in the bugfix note of 30 Nov and mentioned to a few people that i had only tested a few and they seemed to work but wanted others to test and give feedback. If possible look at all types of quiz at all levels not just the ones you normally do. As you may know it was not possible to test these on the test site so the testing phase it on the live site.

It REALLY does not take long to find an issue or two. ALL the quizzes I tried yesterday eventually showed a blank picture, on two occasions the blank one was the correct answer
. 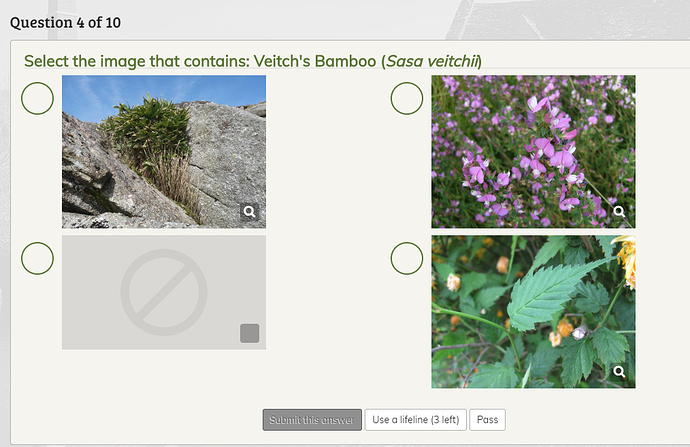 image.jpg1014×658 193 KB
You are not getting the feedback you deserve because, I imagine, few people are trying the quizzes.
I also believe the grading to be far too hard. What sort of Plant beginner can ID Tumid Notchwort from leaves alone?
here it is, the ONLY one https://www.ispotnature.org/communities/uk-and-ireland/species-dictionary/NHMSYS0000309930/lophozia-ventricosa/observations and with NO agreements (@JoP)
lavateraguy 24 December 2017 14:32 #13

The easy quizzes are definitely too hard. I tried one, and the 5th question was identify this species (Thalictrum delavayi - I tried Thalictrum aquilegioides: neither species is one you’d expect a beginner with the British flora to be able to identify.)

The first question was a multiple choice between 4 alternatives - the barberry and snowberry were obviously wrong, but that left a choice between two obscure plants (marsh valerian and slender hare’s ear); I’ve seen the former once, and the latter never.

Do you need more Mike?
This was the first question in my Easy Birds 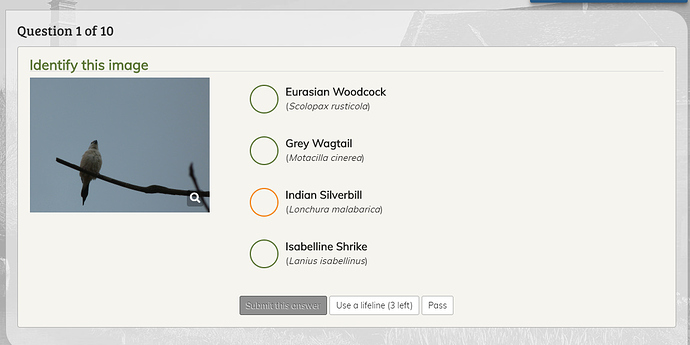 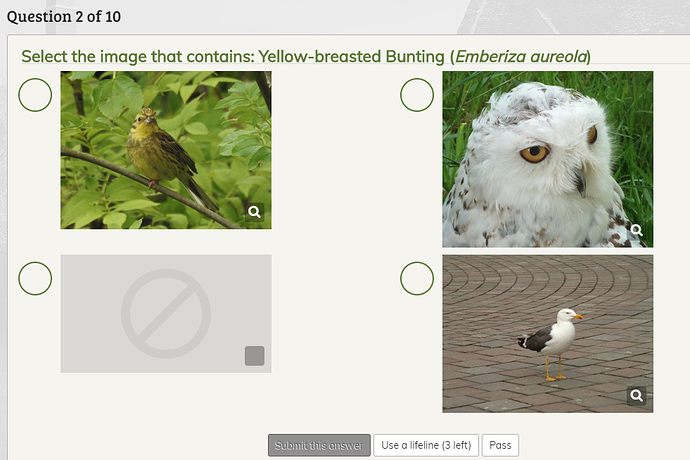 Q5 Easy Birds
Finally, searching iSpot UK for Burhinus oedicnemus or Stone Curlew fails
This is a Thumbnail (from somewhere) and as big as it gets. Quizzes are frustrating and not very educational.

I have no idea what tumid notchwort looks like and indeed have never even heard of it. Not a ‘beginners’ plant, unless a multiple choice between this, daisy, oak tree etc

My main quiz gripe is the repeats of questions but with the answers being different each time (pear = pear; pear = twinflower etc etc. I haven’t stuck around long enough for the missing photos to be an issue. On the plus side it is nice not to see the same old clubmosses that haunted ‘Plants Quiz’ all summer

The multiple parts questions on the easy plants quiz are mostly not too hard for vascular plants, because they have 4 species phylogenetically distant from each other; if you can get the family you can get the right answer. But that needs test taking skills, and an awareness of what’s in the British flora.

But there was a non-multiple choice question which was a nondescript moss (whitish feathermoss) which I solved with the aid of the lifeline and reference to the BBS Handbook index. I don’t seem to have been given the promised half-credit, but perhaps they rounded down 9.5 to 9.

And there was a multiple choice question that was to pick the image of Syntrichia latifolia among 4 different mosses, and they managed to pick 4 quite similar mosses. I had to resort to the BBS Handbook again, except that I would probably have guessed right (I reckoned that two of the images were thyme mosses). It didn’t help that Syntrichia latifolia doesn’t look much like Syntrichia ruralis.

Correction: it did give me 9.5, but the bar chart that it shows at the end of the quiz doesn’t show the half-point scores, and rounds down.

Tried another one. Apart from difficult bryophyte questions, the last question was to identify a plant that turned out to be hybrid arum rather than spotted arum.

Trying an intermediate plants quiz. The first and third questions were identify a plant as one of four graminoids. One wasn’t really identifiable beyond being a grass, but fortunately there was only one grass among the alternatives offered.

The 4th question was to identify Lotus creticus. Apart from the problem that it wasn’t clear whether it was the legume or the mesembryanth one was supposed to identify, Lotus creticus is not a British plant: the quizzes should pay attention to the community.

Question 6 was to identify a plant as one of 4 similar mosses. I guessed right on the basis of subulate leaves.

Question 7 was to identify a dandelion species as one of four images (possibly all Asteraceae); two of the images were dandelions. That puts the question at expert or beyond, not intermediate.

Question 8 was to identify whorled caraway, which I don’t know. I might have had a chance if there were any flowers or fruits showing, but the quiz used a purely vegetative specimen.