Zoom - does anyone use it?

I don’t use it and I have tried a few times. It is no quicker to load than Full Size and full size has two stages (with big pictures)

I prefer Full size although I have zoomed from time to time. I think it depends on the quality of the original image.

I don’t. Theoretically there might be a zoom function that would be useful but I found the current one significantly less useful than just opening the full sized image so beyond trying it out when it was new I’ve never touched it.

Can you give some examples. There may have been issues at the end of last week due to disk space problems and intermediate sized images being temporarily deleted but now all images of all sizes should be present. The intermediate size might take a second or two to appear as it may need to be generated but it should turn up.

There was one this morning but it was an old observation and I can’t remember which it was.
This seems to be something particular to me. I’ve just had to get used to it being this way since the change to the new site.
Images that I can’t get to load one day would be fine another day.

It’s a random and recurring issue. I have been putting it down to my Download speed but it’s not that this morning, nor yesterday.
I have been in South Africa a lot this morning and it seems worse there. Any post with more that 5 pictures seems to be the pits for completion but often a single picture will not load without View Full Size. I will try to add an example.

PS I went looking for examples - typically everything is working well chus now.
I found this though 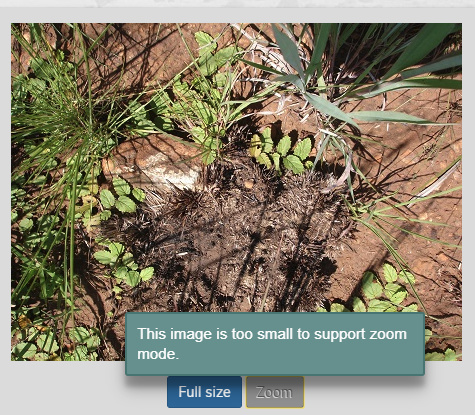 There is NO difference with Loading times tween Zoom and Full-size.
Zoom is not Zoom but ‘select’ or ‘pan’ - it does not zoom, it enlarges a small portion
Full size is superior because it IS bigger at the second stage. Even stage one is superior to Zoom. I find zoom annoying
Here is a large picture to try your hand at second stage enlargement - put the cursor where you want the centre to be. https://api.ispotnature.org/storage/app/sites/default/files/frontend/21890/201710/P2110099.JPG

I use ‘full size’ and then zoom in and out using the mouse wheel. I wouldn’t want to lose that facility - can’t ID much without it ! - but as far as the Zoom button goes, I don’t use it.

Far from all images of all sizes being present, none of the ones in ‘photos on observations’ have been restored

I use zoom occassionally.
The zoom size is only marginally larger than Full size; I measured a periwinkle at 7cm (Full size) on my monitor, and 8.5 cm (Zoom). On my iPad the same periwinkle is 2.5cm (FS) and 4cm (Z). That surprised me so I checked again; same result.

Zoom responds like a compound microscope, moving the opposite way to the mouse/finger. On the desktop, with a mouse, that seems very normal to me; on the iPad, using my finger it seems confusing. That surprised me too. It seems my brain has learned right hand manipulation (as in using a microscope) better than finger manitpulation.

So, in answer to Mike’s original question, I wouldn’t miss it and can accommodate as JoP does with full size and then zoom in with the mouse.

I don’t use the zoom and wouldn’t miss it.

I don’t use it and could easily live without it. I don’t understand, though, why some full size pictures have a further zoom facility (the + sign cursor) and some don’t. I find this quite useful, Also some “full size” pictures are the same as the original. In some cases even a fuzzy enlarged image would help id, and we could surely be trusted to judge whether such an image was helpful.

Enlargement probably depends on Pixel size. Many pictures won’t enlarge at all (see my linkpic above), some won’t do the second stage enlargement.
Most Camera pix uncropped are well over 3000x2000pxls, Low-range phone cams are 800x580. Crops (selective enlargements) from Phone pix can be as low as 180x75
We can only see our own Pixel sizes during Edit. I am not certain what the parameters are, iSpot is though.

As dejayM says it depends of the size of the photo. If the photo is small enough to fit in the window it’s shown at full size, otherwise it’s reduced to fit, and the + sign cursor allows you to look at individual bits at full size.

If you want to enlarge a photograph beyond its native size you the zoom facility of the browser (perhaps ctrl-+ for zoom in, ctrl-- for zoom out, and ctrl-0 for reset, but it may vary between browsers.) 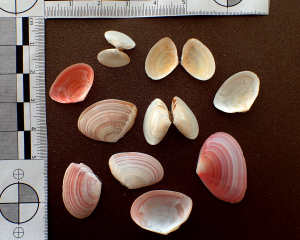 Observation - Thin tellin - UK and Ireland. Description: Thin tellin shell is small, up to 3cms. The shell is thin and brittle, rounded triangular in shape

More then… Image quality is something else.
Go here https://www.ispotnature.org/communities/uk-and-ireland/view/observation/751487/barnacle-scars
Fully enlarge Picture 1 - impressed?
Now just go back one to Picture 6. try that. It is a bigger picture (more pixels) but is abysmal (technically) a little camera-shake or lack of fucus (I mean focus) or a ‘cheap’ lens go a long way towards ruin!
Zoom works OK with these but it is only duplicating the effect of Full size.
Of interest I sometimes only find additional ‘subjects’ via Full size - just found, but cannot name, the crustose Bryozoan colonies in P1 (who cares?)