Doesn’t this page list all observations of that species?

Or am I not understanding the question?

i am VERY sympathetic to that cause
The name Coccinella quatuordecempunctata is in the new (Proposed) dictionary as Propylea quattuordecimpunctata. Species Dictionary | Natural History Museum
But even if it changes again, the lovely Common name holds all scientific names, new and old, together…**
We must not lose the common common-names, the historically accepted ones. But equally we should not have an abundant series of alternative common, or regional. names in the Drop-down.
The Common name menu in iSpot, however, is causing relatively serious problems in iSpot. A good number of Fungi, we discovered in the recent iBlitz, have broken up Other Observations because a common name MAY be linked to the wrong Scientific one. And so we may get two sets of different Other Observations.
Sorry Chris you came as I was editing…
The other part to the question is VERY valid - what happens to old Names with the Likely banner WHEN the new Dictionary is installed (with new names)? It’s going to take some pretty advance coding to sweep the site and change old for new.
Already we see that IF new names are used in the Current site (I can give and show examples), then they are Validated but they do not always get awarded the Likely Banner.

**I notice (just tried) that 14-Spot does not get a response in the Common name menu and yet IS the common name with the ID. So there is a LOT of work to be done on Common names in Menus.

Aha! I look at the original page again and, lo and behold, the previous observations are listed. Was I blind before or … ?

Sometimes they take a while to load.

Do remember only 49 are collected in Other Obs. (and in Chris’s Link above - one page) whereas, using the Explore Community Filter, all 387 observations can be viewed.
.
I don’t think there are observations under these names.
(Calvia 14-punctata / Calvia quattuordecimpunctata / Coccinella 14-punctata / Coccinella quatuordecempunctata)? Or I can’t find them…
Here’s the Browser https://www.ispotnature.org/communities/uk-and-ireland/species-dictionary/NHMSYS0020151767/coccinellidae

Every day I learn something new about ispot.Today it is that 49 is the limit for Other Obs; I guess that red seaweeds posts are not as popular as 14-spot ladybirds, so it never came to my attention.
.
I have just taken from my bookshelf a booklet, 1986 Ladybirds of Dorset, Adrian Moon, where Propylea 14-punctata keys out and is illustrated.
.
It says there are 34 ladybirds species recorded for Dorset and has a section on Ladybird Folklore including "In Dorset the number of spots foretold the price of wheat, each spot representing a shilling per bushel (for younger ispoters these were the units we used in days of yore). They also warn of danger as in "Leady-bird, leady-bird! vlee away hwome; your house is a-vire, your children wull burn. Dorest 19th Century.
.
So thank you all for this post which I have enjoyed.

I was surprised to find the American Piddock, Petricolaria pholadiformis, which was in my Tebble’s 1966 book of British Bivalve Shells, published by British Museum, wasn’t in the ispot uk species directory
https://www.ispotnature.org/communities/uk-and-ireland/species-dictionary/NBNSYS0000178607/veneridae
It is in the current NHM directory
https://www.nhm.ac.uk/our-science/data/uk-species/taxon?tvk=NHMSYS0021006626
apparently entered in 2014,so it seems odd if it wasnt in the previous directory

I found this ispot page. https://www.ispotnature.org/communities/global/species-dictionary/13219275/petricolaria

And trying a screen shot… 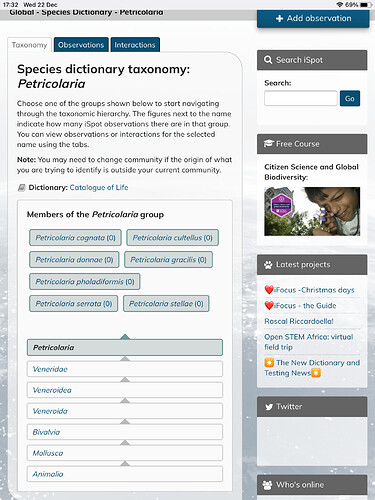 There are pretty frustrating anomalies in both - plenty of examples of synonyms in use and plenty of absences and some outright mistakes.
P. pholadiformis is, in some ways, a typical example of Dictionary issues where alien species, whether we consider them common or not, are not entered in dictionaries. The New Dictionary, when installed, will immediately be out of date. The latest addition to the UKSI (NHM) was three days ago.

Here is the Observation in question
https://www.ispotnature.org/communities/uk-and-ireland/view/observation/836361/ but it is one of many similar cases. Testers are having fun with dozens of them.

I can take the ID to the Test Site and see what happens - all WILL be well in this case but not, yet, plenty of others

image1233×521 138 KB
To be fair, the New Dictionary is a wonder - it WILL be lovely to use but will still have issues and difficulties. It needs more testing before installing and the Curator needs more input from interested parties.
We need more use of the tags absent1 and taxonomy1 see Taxonomy issues PLEASE (now 2 years old)
There is a dedicated Forum thread here Proposed-dictionary testing where both the Curator and Coder respond; and a Project here https://www.ispotnature.org/communities/uk-and-ireland/view/project/835018/-the-new-dictionary-and-testing-news
ChrisMcA 23 December 2021 20:26 #11

Thanks for the answers. I now realise it is/was in the old uk dictionary, not in the family veneridae but in family Petricolidae (now subfamily Petricolinae) as
Petricola etc

Your second link goes to the Global Community - there really are no Obs of Banded Venus in the Global Community
True though that sometimes the Browser does lie (commonly does)
In this case however it seems fine https://www.ispotnature.org/communities/uk-and-ireland/species-dictionary/NBNSYS0000180557/clausinella They are lovely Observations that deserve far more support

(My comment above came after doing a search for a case where the species &or genus had changed name but the old likely’s remained but with new name in other observations & Wikipedia etc. But not long after,realising I’d fallen down the global dictionary rabbit-hole, deleted it & got the message that it’d be removed in 24 hours (so am a bit surprised it’s still there)

You deleted your second comment (only), not the first. The first was present yesterday but so was the message about you having removed (the other one) That’s fine then - sorted.
There is a LOT of confusion and difficulty about Communities. Look in Global, get trapped in Global, open a za Observation and your Community is immediately za…
Even the word Global is confusing - I have raised it all a few times with Admin